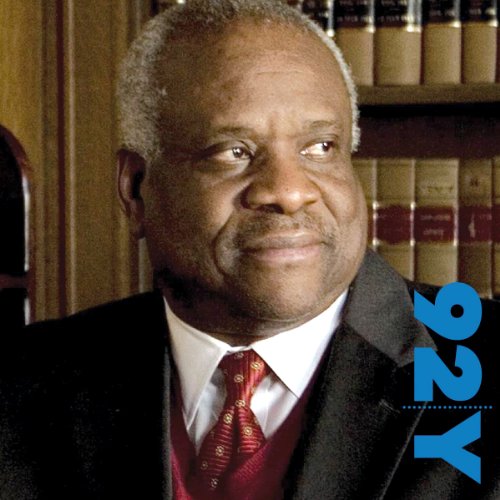 In a rare interview given by Supreme Court Justice Clarence Thomas, television journalist and lawyer Jan Greenberg doesn't shy away from asking incisive questions during this revelatory conversation recorded in front of a live audience, in New York City, in October of 2007.

Candid and well-spoken, Thomas waxes eloquently on a diverse set of topics ranging from his radical political leanings in the 1960s, to the criticism surrounding his opinion on affirmative action, to his motivation for writing his best-selling memoir.

This fascinating listen sheds light on this complex and controversial figure in contemporary American history.

I would probably be classified as a liberal (what's up with these labels anyway). I really wanted to understand the mindset of an African American 'Ultraconservative' being African American myself and somewhat successful. Well, I have come to the conclusion that the end result is determined by the journey - and what a journey it was for Justice Thomas. He has a place reserved on my study wall right next to Truman, Obama, Einstein and yes Malcolm x.

This 1.5 hour interview from almost a decade ago by Jan Greenburg gives Justice Thomas the opportunity to demonstrate the incredible intellectual force that he is. It appears to me that the interview is related to the 2008 release of his autobiographical book My Grandfather's Son. That wonderful book was never released in Audible or Kindle formats. Amazon does sell it in paperback format. I appreciate Audible releasing this interview through the 92nd Street Y series.


🗽 Clarence Thomas: A Conversation At the 92nd Street 🗽

At Less Than $1 Learn About Justice Thomas - His Own Words

🗽 I have always had the utmost respect for Justice Thomas. His was the first Justice whose Senate confirmation I paid attention to. Democrats focused on blocking the conservative justice for the court, in my opinion. I was amazed at the tactics they tried to use instead of debating the merits of this man.

🗽 Clarence Thomas grew up in the segregated South. His family had nothing of monetary value but he chose not to use that as an excuse to fail.

🗽 This inexpensive and short listen will focus on the highs and lows of this man who came from humble roots, phases through anger, radicalism, advanced education, many paths that took him to become a justice of the Supreme Court.

🗽 Unfortunately, Audible.com or iTunes does not have Clarence Thomas autobiography available. It is called 'My Grandfather's Son.' I urge anyone to find it in CD audio, print or digital to read the story of his life.

The audio quality was not great, it wasn't bad either. It was subpar due to the fact that it sounded like it was recorded in an auditorium during the Q&A.

🗽 My advice: Find "My Grandfather's Son" immediately before or immediately after listening to Clarence Thomas: A Conversation At The 92nd Street Y,' you will not regret it.


📚 I find that reviews help me, especially when authors or performers are new to me. If you found this review helpful, would you take a moment and select "YES" below?

Feel free to follow me on audible.com. I review from most genres. Authors, publishers and narrators, please feel free to take my review to any other media that you would like. Thanks!

Clarence Thomas gave a brilliant and moving interview to a progressive blockhead, Jan Greenberg. Jan is a liberal ideologue of the first water, and was unable to process most of what Justice Thomas was saying. In spite of that, the interview is well worth hearing. No doubt, Justice Thomas had plenty of experience with this kind of thing and navigated it with grace and charm. It's frustrating because Jan misses most of Justice Thomas' points and her follow-up questions come from the echo chamber in her head rather than the person sitting across from her. After hearing this, I went out and bought "My Grandfather's Son" immediately. I just wish there was an Audible version of that, read by Clarence Thomas.

What an amazing man and justice

I loved it. It is fascinating how a man so smart is treated so poorly because he thinks for himself and not in line with what people think he should think. Justice Thomas gives us a view of how the Supreme Court should operate.
People often ask the question, "If you could have dinner with anyone in the world who would it be?" Justice Thomas would be my pick. No question!

What I never knew!

This took me into the mind of Clarence Thomas. It gave me a picture of how he reasoned when making decisions on the Supreme Court. This was eye-opening since press articles would have given you a different impression.