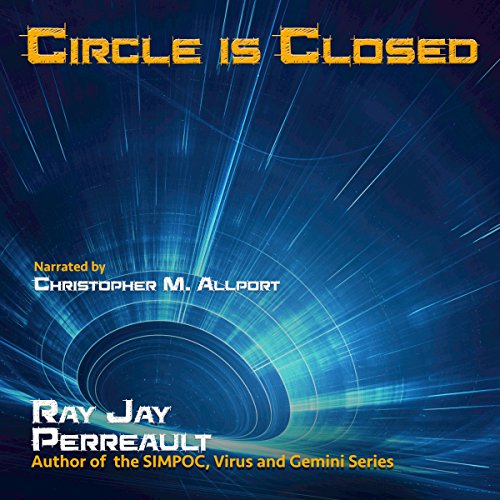 Humanity left Earth a long time ago. They had treated their home planet poorly, and the deteriorating environment forced them to leave. They traveled 189 light years to a faraway world and named it Horizon, respecting the new lives they intended to build. Fortunately, they learned their lessons and treated their new world much better. After over 100,000 years away from Earth, they still revered her and taught their children her beauty. They knew that someday they would return, and hopefully Earth had healed, and she would welcome them back. They finally developed faster than light travel, and the first place they wanted to visit was the home planet of the human race. When a small crew made the trip, they found that Earth was healed and healthy, but they also found changes that surprised them. When they left to return to Horizon, they had more questions than when they left.

What listeners say about Circle Is Closed

For a short tale, it has depth.

Note: While this is Book 2 in the series, it works fine as a stand alone story.

Commander Leopold Harnessy is leading a mission to test a new FLT (Faster Than Light) technology. The humans of planet Horizon hope to find old Earth and perhaps resettle her but first a test ship must be sent to see if the new tech works. If it does, then larger ships could be sent the same way. The Horizon humans left Earth many, many generations ago but they still revere her. Now, they wish to reclaim that heritage.

Harnessy must leave his family on Horizon as he undertakes this possibly dangerous mission. His daughter Rose asks him a serious question about Earth during the send off ceremony. Harnessy hopes to find the answer to it and many other questions. When Harnessy & crew arrive at Earth, she is healed of all the environmental damage that forced humans to leave her so long ago. However, Harnessy and his shipmates are met with a surprise.

The author did a great job for such a short story. There’s plenty to consider in this compact tale. I was quickly drawn into the tale. There’s some big questions the main character has to consider, both before he leaves Horizon and once he gets to Earth. While the story moves swiftly along, it has depth.

I received a copy of this audiobook from the author at no cost in exchange for an honest review.

Narration: Christopher M. Allport tossed in some real ship sounds for when the ship AI is answering questions or announcing something. Each character was distinct and the the female voices were realistic. He also performed an old lady and a little girl with success.

This is a perfect short story for someone with some time to kill while traveling or commuting. I'm really hoping this author will start writing some full-length novels instead of just short stories.

The story tells of a crew getting ready to test a new faster-than-light engine by traveling to the long abandoned Earth. With over a thousand years having past since humans left the dying planet, the children of our home world are preparing to return to learn of its fate. However, their best and worst predictions couldn't prepare them for what they will find...

The narration here was top notch, and there were some interesting sound effects thrown in that I thought added to the story's realism.
I'm going to listen to this author's other short story and keep an eye out for anything longer. There is definitely some potential here for some great audiobooks in the future.

I received a free copy of this audiobook from the author, publisher, or narrator in exchange for an unbiased review. I was NOT required to write a positive review and this reflects my honest opinion of the work.

I was unaware this was only a sample.

The story definitely had my attention. I was not aware I had started a sample so when it ended suddenly I was very disappointed. If the rest of the book is anything like the sample it is worth the complete read.

This super-short story had a little of everything. Space travel, politics, and of course, the sighting of the planet Earth for the descendents of humans that had left generations ago. This short would definitely whet your appetite for the longer story in the series. I was gifted this from the author.

Humanity managed to completely wreck Earth's environment, making it unfit for human survival. With no other real choices, a surviving remnant of the human race set out for a distant system where they seem to have a good chance of finding a habitable planet--and they succeed.

It's a very good planet, and they've learned their lesson, and have treated it well. But it's not Earth. Even after the multigenerational trip to the planet they call Horizon, and more than a thousand years there, they still feel committed to returning home to Earth, to see if it has recovered, in the hope of resettling it.

That's the background. This short story is about the first trip back to Earth after they develop a usable FTL drive, and the surprise they get when they arrive. It's a half-hour listen, and it's enjoyable and interesting.

I bought this audio short story.

Good story. but too short.

I liked the story. felt it was too short. hope you make longer stories. will forward to if you make a follow up story

This ebook is way too short. I easily could have listened to far more.

This very short story that has potential. Earth was decimated centuries ago and the human population relocated many light years away, planning sometime in the future to return. That future is now, and after designing a means to traverse the distance quickly, they send out a reconnaissance team that are surprised by what they discover.
A bit too short and technical for my liking but the story concept is very interesting and has potential. It felt like the introduction to a much longer story rather than a complete story in its self, but perhaps it is the authors style that he reveals his story in short snippets rather than in a longer tale. The narration fit the story well but I did find that the beeps and bells were more distracting than enhancing. I received this audiobook from the author in exchange for an honest review.

What does Christopher M. Allport bring to the story that you wouldn’t experience if you just read the book?

Great narrator, definitely brings the story alive. Just sad that this was a short story, would have love to hear more.

I love this short story. With only 27 minutes worth of storytelling, Perreault deliver an awesome short story. I can't believe how hooked I am, I want more. Looks like I am going to have to pick up book 1 and whatever Perreault have written.

**This audiobook was provided by the author, narrator, or publisher at no cost in exchange for an unbiased review courtesy of Audiobook Blast.**

Unfortunately this ends on a cliffhanger but the story is great so far. looking forward to the rest of the story.