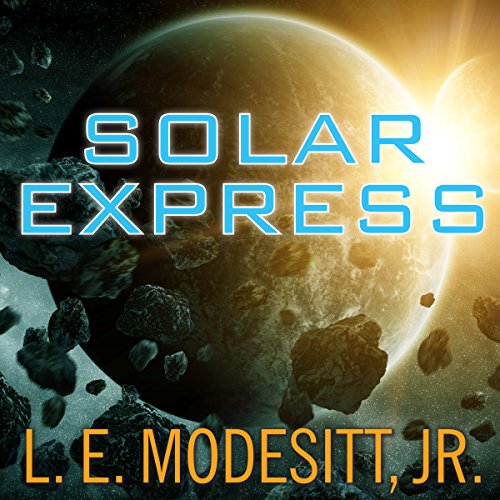 You can't militarize space. This one rule has led to decades of peaceful development of space programs worldwide. However, increasing resource scarcity and a changing climate on Earth's surface is causing some interested parties to militarize, namely India, the North American Union, and the Sinese Federation. The discovery of a strange artifact by Dr. Alayna Wong precipitates a crisis. What appears to be a hitherto undiscovered comet is soon revealed to be an alien structure on a cometary trajectory toward the sun. Now there is a race between countries to see who can study and control the artifact, dubbed the "Solar Express", before it perhaps destroys itself.

Leading the way for the North American Union is Alayna's friend, Captain Christopher Tavoian, one of the first shuttle pilots to be trained for combat in space. But as the alien craft gets closer to its destination, it begins to alter the surface of the sun in strange new ways, ways that could lead Alayna to revolutionary discoveries - provided that Chris can prevent war from breaking out as he navigates among the escalating tensions between nations.

What listeners say about Solar Express

TERRIFIC Scienc-Fiction with Actual Scince in it!

Wonderful, Science-Fiction with some actual Science in it for a change. Good story; people; premise; imagery; imagination. Altogether, a very good book. And, a very good listen.

Really engaging story, fast paced and gripping throughout. couldnt stop listening.if you like hard sf and sciene you'ĺ love this

You've got mail in the 21st century.

Page turning diolg written with subconscious interjection. Geopolitical action with interpersonal relationships weave though a ten thousand years old space relic misery. Many questions are answered but each answer leads to more questions. A couple starts a long distance relationship as tragedies take personal toll around them they help each other while being unable to help themselves.

The storyline is clean, the idea is good (not new but some original perks). The book includes many side details which make it too long to my taste, and at some points lacking action and even boring. Strong finale, which if fact could be more detailed.

I Really Enjoyed This -- Far More Than Expected

I liked "The Martian" (the Audible version more than the movie) because it was near future, pro-science and well-reasoned. This is all of those. A little more hard-science, just as much a sense of using reason and getting things done. There is a more political/personal backstory, but in the end it is another science fiction-procedural. It just adds a more military component as well (which is OK by me.) It is a long story, starting a bit slowly. But the narration is better than average and it moves at an ever-increasing pace to an engaging end. (Is it my imagination or is there a growing re-birth of throwbacks to earlier, more basic sci-fi themes updated for our time and science?) I expected three stars, thought it was four most of the way through the middle -- and ended at 4.5. But it had a lot of heart do I gave it 5.

A slow-paced novel, with lots of science, politics and a touch of romance. I liked it's mature tone and the plotbearing letter exchange. In sum, a different yet rewarding read.

would not recommend. this was a short story that got made into a longer than needed book, from a completely predicable ending to listening to the words "multi fractal mini granulations". ugh! i think that phrase was repeated at least a few dozen times over the course of the book.

Lots of very detailed science, somewhat hard to follow, worth the read though. The romance is charming and humanizes the whole, with a lot of letters in the bottle back and forth.

A bit slow for my taste

A very detailed book about science, human interaction and politics centered around an unusual discovery. I enjoyed the more exciting parts about the unusual discovery, but there was a great deal of detail, buildup and slow character development to get there. Then it kibda fizzeled. I suppose it is a more realistic telling of what would happen in the event of this discovery. But for me i like things with a little more pulse pounding action. but thats just me. if youlike science and a detailed discussion, then this is for yoy.

Great read if you're having trouble sleeping.

What disappointed you about Solar Express?

I wanted to like this book. I really did, but it seemed like a slow-starter that never really got started. Just commentary on fictional science phenomena and emails from a couple penpals that may or may not get to meet in person at some point (avoiding spoilers). I read to the end hoping it would get better. It did get a little more exciting about halfway through, but it was all quite predicable. To top it off, we never actually get a resolution on the discoveries from the main characters which was a bit of a disappointment. What the heck was the deal with those multi-fractal mini granulations that were mentioned at least a few dozen times anyway? If this were a setup to another more interesting story, that would be tolerable, but it appears to be a standalone book, and I found myself wishing for my 16 hours back.

What could L. E. Modesitt, Jr. have done to make this a more enjoyable book for you?

Cut out the political rhetoric, and give the readers an inkling of just what the artifact is as well as what happened to it. The political conflicts were rather unnecessary. Drawn-out scientific explanations, and going step-by-step through the discovery process was just plain boring... and unfortunately, that was the entirety of the book. The flash-forward ending stating that nothing like it was seen again was a huge letdown. The book would have been more enjoyable as a setup for some kind of alien appearance. I read the whole thing waiting for first contact.

Performance was good, but all characters really sounded the same. Vocal range wasn't terribly impressive, but it was read well.

Ok story, but not really a book

Its slow, its a lot deeper more focused on the two characters than typical for science fiction. I felt like one of the main characters was just static though, and the other maybe marginally changed. I would classify it as a short story instead of a book.