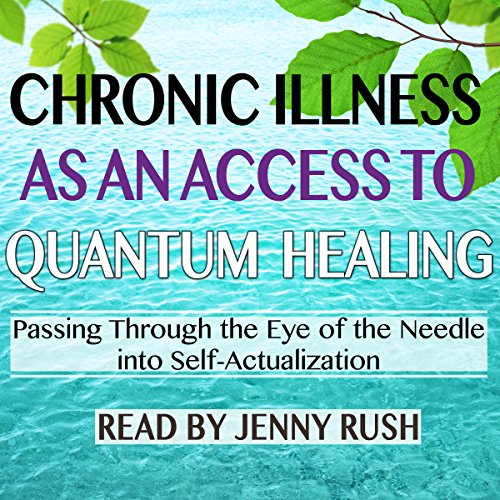 After a number of years of being chronically ill with Lyme disease, Jenny Rush had a momentary realization that she was overlooking a lesson that was resulting in continued ill health. As she went into her last year of dealing with chronic illness at a physical level, Jenny shifted her primary focus from the illness itself to addressing the multitude of experiences that the illness was provoking. This resulted in ongoing shifts in perspective, a process of awakening to her true self that resulted in quantum healing.

This is a raw, honest and inspiring story that takes the listener through the common struggles of chronic illness such as resistance, resignation, lack of self-worth, loss of identity, suicidal depression, guilt and exhaustion into acceptance, surrender, awakening and true healing. It describes the process of an ordinary person traveling through the eye of the needle into self-realization.

While Jenny's revelations were similar to those described in near death experiences, there were no exotic or elaborate visuals. She was a normal person lying on sofa and staring at cobwebs on the ceiling when she had her first of many epiphanies. This book is for anyone dealing with chronic illness who longs for peace and fulfillment. It is the story of how true healing is available to, and possible for, anyone.

very good and uplifting. struggling myself with chronic illness (Blepharospasm) this gave me hope for the future.

I cannot begin to express my gratitude for you willingness to share your journey.
There are no coincidences in life. This I believe as witnesses testimony.
It will take time for me to process through you thoughts.. see how I might apply some of your insight. See how it fits for me. However as you said there is no wrong road.
You will hear from me again.

This book! Absolutely incredible, beautiful and real. I felt like she was speaking my exact last year plus of life. Incredibly grateful for your rawness Jenny and sharing your truth!