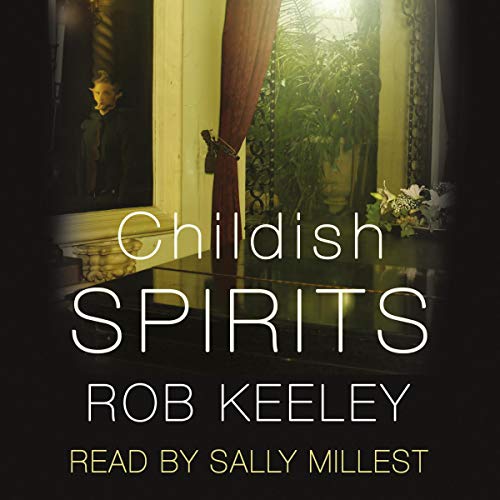 When Ellie and her family move into Inchwood Manor, Ellie quickly discovers strange things are happening. Who is the mysterious boy at the window? What secrets lie within the abandoned nursery? Who is the woman who haunts Ellie’s dreams - and why has she returned to the Manor, after more than a century? Ellie finds herself entangled in a Victorian mystery of ghosts and tunnels and secret documents - and discovers that life all those years ago isn’t so different from the world she knows today...Rob Keeley’s first novel for children brings out all the ingredients of the classic ghost story within a recognizable modern world setting.

Listeners of his short story collections for children will find in Childish Spirits the elements which made his past books such a success - strong and contemporary characters, inventive twists on traditional themes, and a winning combination of action, suspense, and humor.

What listeners say about Childish Spirits

Ellie’s parents break up and she moves with her mother and her brother Charlie across the country. They are now living in a flat within a historic house, Inchwood, her mother is helping to renovate and advertise to open it up to the public.
But immediately upon arrival, Ellie sees a young boy at one of the windows, even though no one is supposed to live there yet.
When she stumbles into an old nursery and weird things start to happen, she has to discover what is going on there and prevent something terrible from happening.

Childish Spirits is the first book in a series and I really enjoyed listening to this ghost story. It had the right amount of spooky atmosphere, dangerous antagonists and heartwarming moments. There is a lot happening in the book which I didn’t hint at in the summary, but since this book is relatively short and I also read it without knowing more I can tell you, that it’s great to go into this not knowing more than Ellie does at the start!

You can meet Edward, the little boy, with her and be surprised by all the twists and turns. Even though this was written with a younger audience in mind, I could really enjoy it too. Ellie and Edward are great together, there were funny moments and really touching one as well and the ending was absolutely perfect!
The characters are well-developed for such a short book and it really surprised me a few times. The pace was very good and keeps you glued to the page (or your headphones??) wondering what might happen next in this ghostly mystery.

The writing is appropriate for the target age range but can certainly be enjoyed by a wide range of readers, it’s witty and easily understandable.
Another thing I liked was how easily the historical merged with the present time. Edward being from the Victorian era and his disdain for some more modern inventions, conventions or phrases. It also keeps a good balance between the past and the present and sets up new adventures in the sequels.

I, for one, will continue this series and I really recommend you check them out if you like middle grade and/or are in need of more ghosts to grace your TBR (as was I).

This is the first book of Rob's I have listened to and I must say it was a great listen.
The story follows a young girl and her family as they move into an old mansion to renovate it for a charity, but the house is haunted by a young victorian boy and they must work together to stop him being sent away to the after life fully.

This is an adorable book. As in, I adored it from start to finish. It's also adorable in the sense that its characters and story are charming and sweet.

But it's not just a "cute" story. There's a strong creep factor (it's a book about ghosts, so I'd hope so), and talk of some deep issues like divorce, class prejudice, and suicide. Also, it's incredibly well-written.

As read by Sally Millest, it's doubly enjoyable. Of course, a big part of my personal enjoyment probably stemmed from the fact that she has a great English accent and as an American, I'm a succor for that. But she also reads with beautiful flow and expression. Animated by Millest's lively yet sensitive voice, the characters are vibrant and vivid, each with a unique, strong personality.

Let's talk about the characters, shall we? Edward, the ghost of a rich (read: spoiled) 10-year-old, is absolutely adorable. He's also a pain in the rear, but somehow, that makes him not less endearing but more. He's certainly infuriating at times and Ellie deserves a ton of credit for putting up with him. But despite that, I for one grew very attached to him.

I also love Ellie, the main character. An ambitious if young painter and poet who's about the same age as Edward (and also alive, by the way), she makes for a wonderful heroine. I also found her brother Charlie hilarious. He calls his younger sister "small person," and "miniature one."

I've read plenty of MG novels that bored me. Likewise, I usually have a hard time listening to audiobooks because I'll zone out and miss something important. To prevent this from happening, the book has to be both very well-written and paced, and the reader has to be very dynamic. Otherwise, I probably won't make it to the end.

I'm happy to report that I didn't zone out once during Childish Spirits. Not only is it well read--it's perfectly paced. The story is a flawless blend of suspense, mystery, creepiness, charm, and character development.

The first few chapters were deliciously creepy in exactly the kind of way I like (I don't really do scary movies but I dig ghostly stuff and am obsessed with E.A. Poe). Then I was curious to know who Edward was and what he died of. Soon a strange new ghost appeared in the house and it was totally creepy and suspenseful again.

Mystery followed upon mystery: just as Ellie solved one, it would lead to another. Then there was very real danger and needless to say, by this time I was hooked.

While a few of the twists were things I saw coming, this is a MG book, so I feel like that's how it should be. And there were definitely other twists that threw me for a loop.

In short, Childish Spirits is the kind of MG ghost book I wish every MG ghost book was like. It reminded me of The Graveyard Book and The Children of Green Knowe, except it's probably more exciting than those books (especially Green Knowe, which, though I say it affectionately, has an excitement factor of about 1).

It's also a wonderful October read. Not too scary, but mildly creepy and totally--to use my favorite word because I always will if at all possible--phantasmagoric.

Parts of it made me shiver, parts made me catch my breath, and the end left me smiling. I'll say it again: adorable.