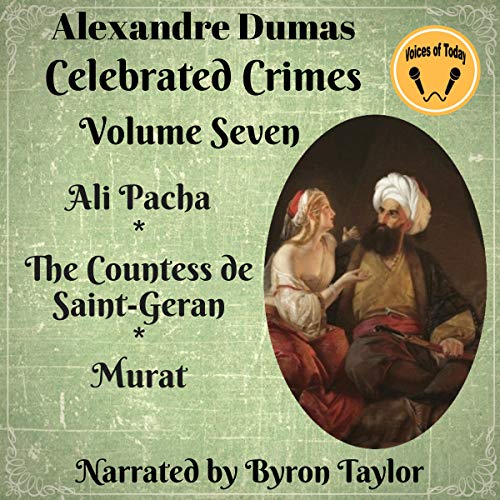 By: Alexandre Dumas
Narrated by: Byron Taylor
Try for £0.00

Volume Seven of Alexander' Dumas' catalogue of crime features three colourful historical figures. Albanian tyrant Ali Pacha (or Pasha) was a brigand who later became an operative of the Ottoman empire. After extending his territory to include large areas of Greece and Macedonia, and aspiring to become an independent leader, he attracted the enmity of the Sultan and was declared a rebel. He died in battle at the age of 80.

The hapless Countess of Saint-Geran, after many childless years, fell pregnant, only to have her baby abducted by villainous relatives, who had designs on the fortune of the countess and her husband. The result was one of the most protracted legal battles in history.

Joachim Murat, the charismatic general who flourished under Napoleon, attempted, after his master's fall, to take over Naples, but was defeated and and executed by King Ferdinand IV.