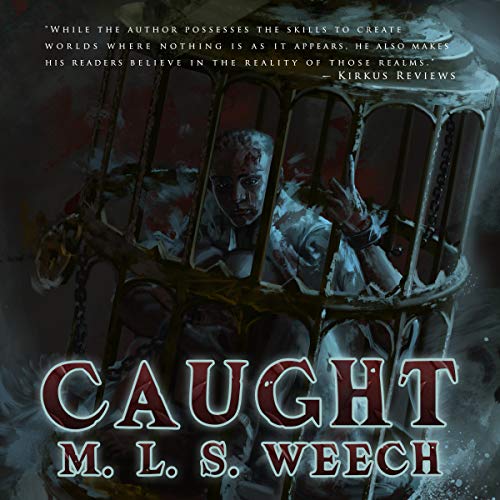 Nothing is at all what it seems, and for four strangers, they'll have to discover why before they're driven over the edge of madness. Within them are the keys to free themselves. They'll need to traverse a landscape of horrors and fettered secrets.

Unknown to these prisoners, another four desperately hunt for their own freedom - a freedom denied them by the tormenting existence of a monster. They will have to rely on all of their talents and each other to defeat the beast.

Meanwhile, unbeknownst to all of them, the spider huddles at the center of its web, plucking its many gossamer strands as it waits...ready to pounce.

What listeners say about Caught

It took a while for me to get into this book but once I did it was quite good.

I was confused from the beginning.Every so often I thought I knew what was going on,then I was confused again.Shawn Compton was a decent enough narrator.I was given this free review copy audiobook at my request and have voluntarily left this review.'

I breezed through this book pretty fast. I wasn’t sure at first what I was getting into. The story pulls you in. The characters are people you care for. Some twists and turns.

The title first caught my attention - I am a sucker for anything Greek Mythology related. Oh dear author, you know my heart's true love and you don't even know me.

The book started a bit slow. I wasn't sure where it was going at first and then I started piecing it together as I went along. It suddenly picked up and Oh boy! I love the plot, the premise and everything about this book. It is strange, different and creepy. I really could not stop listening to it.

The narrator was absolutely perfect and had amazing pacing. I was not disappointed at all by this book in any way

Ho-ly Cow! What a great book to read. Intense with great twists. A wonderful and original take on the genre. Highly recommend!

Four strangers with seemingly nothing in common are pitted against one another using their nightmares as fuel. While they must struggle to face their internal demons, what’s waiting for them upon waking is far worse.

While the book was a little slow in the beginning, I stuck with it, and I’m glad I did. When the action picks up, it really picks up and I found it nearly impossible to put down. There were so many twists and turns that a few times I had to pause the book to just think about what I had just heard. The characters are well-developed and immersive. The author writes people who feel real, ones that you actually start to care about by the time the book comes to an end. Not to mention the mystery and intrigue carefully woven throughout the story.

I also love stories that mix dreams with reality. I think they’re creepy, and this fit that to a T. If you’re looking for something outside of the box, this would be it.

Slow to start, but worth the wait

I received a free review copy of this audio book, at my request, and am voluntarily leaving this unbiased review.

I am going to try and review this book, as spoiler free as I can, but it will be hard as the synopsis gives little a way from the plot.

This book starts out slow, but there is definitely a tipping point where it becomes hard to put down.

The book begins and runs for about the first 6 chapters being odd. The situation hinted at, in the synopsis, is happening and while it quickly became apparent to me what was happening, I'm going to avoid mentioning it directly. Suffice to say, it is confusing, a little disturbing, and a little underwhelming. There is no context for whats happening, it's literally just a series of events, with no threads to bind them together into a cohesive package.

At chapter 6 (I think) the blinds are opened and the world is revealed to us. Honestly, I was a little disappointed. I would have preferred the beginning to have been extended longer, push the reveal back further in the book, but to put some more threads to pull at, so I could unravel the thing on my own. It would have made for a more satisfying reveal. Instead it was a mystery, in that while I knew what was happening, I didn't know why. But the why was shoved in my face, rather than let me see it naturally. It's not a huge deal, but I did feel robbed.

After the reveal, we go back to the mystery, but as it's been revealed, the mystery is gone, so the book changes tone, from a horror/thriller to a action/adventure. The characters still have to figure out the problem, and solution, but as we know, it looses something.

Having said that, it's not story breaking. The plot is still very interesting. A little too much time with the bad guys, but it serves as exposition to the world so it does kind of work.

The characters are complex enough for the story. None are fully rounded people, but they have enough depth to work their way out of the mess they're in with out it looking like the author is helping too much.

The premise is very interesting, however, I was disappointed that this was book 1 of a series. This shares a lot of good elements from. Books like Dark Matter by Blake Crouch, and with 1 tweak (the death of someone), this would have made a great stand alone. As it is, and someone survives that shouldn't have been allowed to, there will clearly bee a book 2, and said character will be back.

The setting were varied, and well done. Streets of America to the streets of Afghanistan. Everything felt right. Even when it was drab warehouses, it still felt the way those places should feel.

Voice narration by Shawn Compton was well done, despite his short comings. He didn't have a wide range of voice and his female voices weren't strong. However, he narrated with emotion and that really came through in his work. Even through it wasn't done with the skill of some others, I enjoyed listening to his voice.

All in all, an enjoyable book. Slow to start, but hard to put down when it did. I like this book as a stand alone, I'm not sure if I'll pick up the sequels or not (when published), voice narration was really good, despite the lack of voice differentiation. I definitely recommend this book.


I couldn't finish the review without stating I was disappointed that the doctor lived. It's such an obvious ploy for the future books that it is frustrating.

Also, the charm of this book is largely rooted in the dreams and the experiments. Without that mystery, I imagine sequels will basically be the A-Team with powers.

I still enjoyed the book, though. I just wish they had hunted down the doc and killed him and leave it as a stand alonem

such a great story with awesome characters. love the twists!

i read the book first a little while back then had to get the audiobook so I could relive it while (impatiently) waiting for the second book ;)