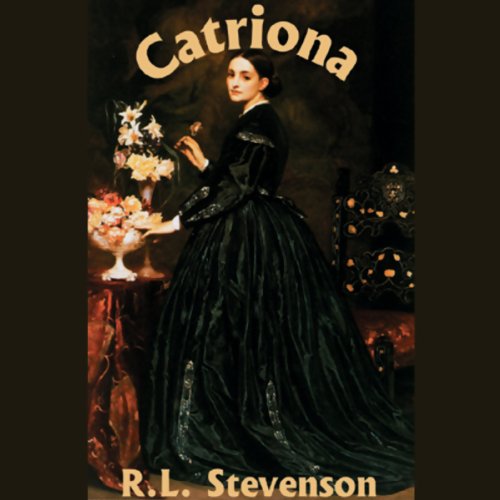 By: Robert Louis Stevenson
Narrated by: Frederick Davidson
Try for £0.00

Catriona, first published in 1893, is the sequel to Kidnapped and continues the adventures of David Balfour and his friend Alan Breck. Balfour returns to the city in order to defend Breck against false charges in the Appin murder. In so doing, he becomes a pawn in a game between feuding Scottish clans; he also sets eyes on a young woman whose involvement in the same matter becomes as central to his actions as his desire to vindicate his comrade in arms.
(P)1997 Blackstone Audiobooks

"Frederick Davidson delivers the text of this nineteenth-century novel with a thoroughly convincing variety of Scottish brogues and English accents." ( AudioFile)

What listeners say about Catriona

A good story, spoiled by narrator

This narrator can make the most exciting stories as tedious as listening to last year’s weather forecast in Basque (if you aren’t Basque). He can’t even pronounce Catriona properly, so I can’t think he was remotely interested in the story or the listener. One day I’ll find a better version.

I could not even get through chapter 1
the story is ok but worst narrator I have heard in 400+ audio books!!!

You will need to have read Kidnapped before reading this book. It is the conclusion of the life of David Balfour after he returns from his escapades. Some parts of this dragged slightly and I didn't fully understand the character of Catriona, despite being female. Shall I conclude that RLS didn't understand women's characters, or perhaps I'm a female oddity? Otherwise it was all good and satisfying, the conclusion had a good pace to it, and it finished well. I would have preferred a native Scottish narrator as sometimes his accent veered into Irish or home counties.

I downloaded this but couldn't listen due to the narrator! I have read and like the book before but unfortunately this narrator has an awful voice and mis-pronounced the name Catriona. As a fellow Catriona, I can't sit through 10 hours of that!

I really enjoyed hearing the conclusion to the tale of young David Balfour. The book can be a little long winded at times but that is understandable considering the period in which it was written.
The narrator was a little difficult to understand at times.

This was an unexpected treat. I read "Kidnapped" in high school (and have listened to several audiobook versions since), but I never got around to reading the sequel. It is, in some ways, an even more interesting story than its predecessor.

David Balfour here completes the process of growing up that he began in the highlands of Scotland. "Catriona" shows the final unfolding of the events that began with the Appin murder. In the process, David is kidnapped again, finds friends in unexpected places, and falls in love. His alliances are complicated: there are few complete saints or sinners here, and even his greatest benefactors are motivated more than a little by self-interest. In the process, David demonstrates physical courage, but more importantly he also shows great moral courage.

There's also, unexpectedly, some sexual tension. David never labels it as such, and Stevenson is discreet in the best Victorian manner, but at one point in the book it's clear that's what's going on. At that point, David and Catriona are thrown together in close proximity, but it's not just the frustrations of love that drive David into frightening mood swings, complete with slammed doors and paroxysms of guilt.

Frederick Davidson is an acquired taste, as I've said in other reviews. I acquired the taste a few years ago and can listen to him now with pleasure and even affection; but my first reaction to his unusual voice was dismay. So I understand that this audiobook may not be to everyone's taste. But if you liked "Kidnapped," and you enjoy Stevenson, and you want to find out how things turned out for David, Alan, and the rest of the gang, give this one a try.

It's hard to say what I liked best about this book -- the writing, the story, the narration -- but it was just one of those books that was so enjoyable to listen to sitting in a park by a pond with ducks and geese, that it will always stay in my memory. The story carries one along effortlessly as you get to know the characters and discover their dilemma. A delightful book that will leave you wanting more.

The story is about David Balfour (main character of Kidnapped) further adventures.

This romatic sequel was written in about 1893 (seven years after Kidnapped). This story stands on it's own, and you do NOT need to read Kidnapped to fully enjoy this book.

Be prepared that this story requires more focused listening because of the language used during the period. Be sure to listen to the sample.

Finish up the Kidnapped Story

What made the experience of listening to Catriona the most enjoyable?

The narrator is just a joy to listen to. I have always been a big fan of Kidnapped. I remember reading both books as a kid but I've never read Catriona again. Having seen a movie version of Kidnapped (the Michael Caine version) recently I felt like reading the follow up book again. Wasn't exactly like I recall. Somehow I liked James Stuart of the Glenn getting off better than his being hanged in almost an afterthought. Still an enjoyable book.

David Balfour was as clueless with women as so many of us are. I am still with David, I have no idea why Miss Grant's letter to him would so upset Catriona. I rather wish the author had shared the secret with us.

Have you listened to any of Frederick Davidson’s other performances before? How does this one compare?

I want to say he did "Farewell to Catilonia" by Orwell. If it wasn't him it was his audible double. They both were very pleasant books.

Some parts of the story were a bit disjointed. RLS made a big deal of Davie trying to get James of the Glenn exonerated and then announces his hanging as almost an afterthought. Kidnapped was a better thought out book. It was nice to see David get the girl in the end though.

Wonderful story but the best is the brilliant reading by Frederick Davidson, who makes this especially memorable.

the rest of the story

If you enjoyed Kidnapped then you must finish the story. because Kidnapped ends in the middle, not at the end.

Remember David's vow: have nothing to do with politics.

though I fall short in comprehending the local dialects when spoken so beautifully by MrDavidson!

Great story and excellent reader. - love it! Get this and Kidnapped together. You'll have a great time with Davie, Alan & Catriona