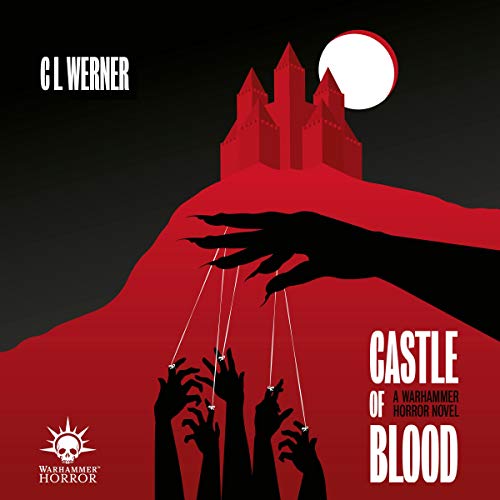 Seven families arrive at an ancient castle, expecting a grand feast - but each guest brings the weight of their own expectations, not to mention hidden agendas and a thirst for revenge that will push them into darkness as evil approaches.

Listen to it because: Experience a Warhammer Horror take on a classic setup - people gathering for a meal, each of them carrying their own secrets. It's sure to terrify and delight you in equal measure.

The story: Guests are arriving at the ancient castle of Mhurghast, summoned by the reclusive Count von Koeterberg. They expect a grand feast, and something more. The ambitious Baron expects to inherit the Count's wealth; the wife of a broken swordsmith hopes to revisit happier times; the fallen priest prays for a chance of recovering his faith.

Seven families, each with their own dark secrets. Each with their own hidden agenda. Each marked for revenge. Doomed to discover the depths of horror and despair, it is not a night of revelry that awaits them, but a night of unprecedented terror. Son will turn against father and daughter against mother, as daemonic evil descends upon Mhurghast.

What listeners say about Castle of Blood

Interesting and fleshed out characters and some good tension throughout. The ending is a bit predictable though if only because it's a horror novel, Voice performance was very good which is the norm for GW's audiobook range. If you feel like the current Warhammer isn't Grimdark enough for you I would suggest giving this and the other Warhammer horror books a read.

Good listen if you want some filler

This is a reasonable listen. The performance is great but the story is a formulaic slasher story with a warhammer twist. The characters are engaging enough and the story makes sense. It isn't anything special but that doesn't make it bad.

Let me say that for the vast majority of this book I was completely engaged in the story, it flowed well even if predictable and the narration was outstanding but I felt the ending a bit bland and way too predictable

I loved the story but the performance is left wanting, I feel like if this was an audio drama book it would of been amazing

Age of Sigmar has no weight to it, everything is generic. The Narrator does what she can, but at the end this book sounds more like a scary-ish bed time story for kids and not like a Warhammer horror.

I think the story was bland. Not really enthralling but it was okay. The narrator makes some of the voices really hard to listen to, but that might be the point.

great performance. enjoyed the way reader differentiated the different characters. all in all a great war hammer horror read

it took me forever to realize this was an age of sigmar book. not really into tye new game because it lacks the depth of story. and it shows here.

the characters arent that bad, predictable cut outs, but not badly. just a rather lukewarm slasher movie type thing.

problem was the world. always felt a bit off when they described things. even mentions of the stormcast and sigmarite didnt do it.

a big issue is the degradation of threat. used to be daemon were this horro, this force of death amd destruction that even the lowest forms of were horrors. people spoke of them behind closed doors and clutching holy symbols. now they throw out khornes name like they were speaking to someone forgetful about their pet, and if they dont keep using its name the other person will lose track of the conversation.

again, speakong the names of these beings should be a thing of dread even worse then facing some of their minion demons. just the glyph is suppose to give a sense of dread and horror, hearing the name spoken makes you bleed from the eyes, milk spoil, corrupt your body nd soul. if your lucky. in the real bad case it draws their attention. other threats being witch hunters killing to prevent temptation or spread.

but thats not here. its more like they are talking of the neighors half rabid dog on a chain.