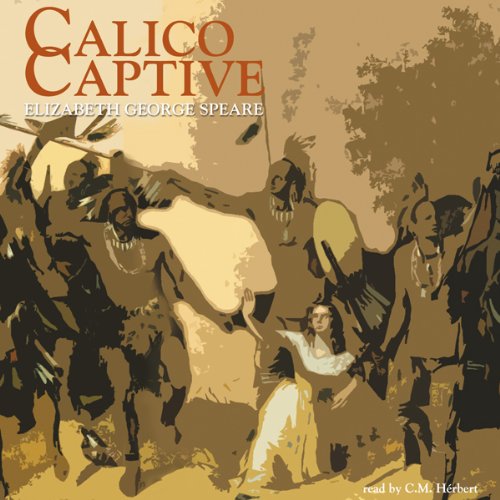 By: Elizabeth George Speare
Narrated by: C.M. Hébert
Try for £0.00

Early one morning in 1754, the stillness of Charlestown, New Hampshire, is shattered by shrill war whoops and the terror of an Indian raid. Young Miriam Willard, on a day which had promised new happiness, finds herself instead a captive on a forest trail, caught up in the ebb and flow of the French and Indian War.

She endures a harrowing march north to what she imagines may be a life of slavery. But when they reach Montreal, a sudden twist of fortune brings Miriam to the acquaintance of the prominent Du Quesne family. The Du Quesnes introduce her to a life of luxury that she never could have imagined, and compel her to the most important decision of her life. Based on the actual narrative diary published in 1907, Calico Captive skillfully re-enacts an absorbing facet of history.

"The constant shifts of locale and situation present narrator Hébert with an excellent showcase for her range of talents....But the very best part is the realistic, almost insider's, view of early American war, class structure, and prejudice." ( AudioFile)
"Vital and vivid, this short novel based on the actual captivity of a pre-Revolutionary girl of Charlestown, New Hampshire, presents American history with force and verve." ( Kirkus Reviews)

What listeners say about Calico Captive

Good book and good narration voice. The voice was easy to understand and moderate in variations in sounds. We felt it wasn't over or under done. The book wasn't as interesting to us as Witch of Blackbird Pond, but it was good.

Elizabeth George Speare is one of my favorite authors. This beautiful little story doesn't disappoint.

my kids couldn't get enough!

loved it! my kids kept asking what happened to the little boy! i would definitely recommend this book.

This book was truly a pleasure to listen to. I enjoyed the narrators voice. Well done.

This book is a page turner. Among my favorite westerns but not your typical western novel.

This account of a kidnapping in early America held my interest and captured my imagination. The writer created not characters but real people who were easy to care about.
It’s amazing how a civilized people can behave savagely to each other. It’s also amazing how people then managed to survive horrible circumstances that would probably kill a modern person.
I recommend this terrific listen.

I loved this when I was a girl -- forty-something years later, it's still a great book! The audio version is nicely done.

I really enjoyed this book. The subject matter was interesting, especially since I knew little about the French and Indian War. Miriam is a likeable heroine and Susanna is a good foil for her. The narration is expressive and well done. Elizabeth George Speare is one of my favorite YA authors and she doesn’t disappoint with Calico Captive.

yes- it is exciting! Gives a glimpse into the life of captives-- shows how different personalities rise to meet daunting situations

the scene where Susannah gets her children back

The story was thought provoking and enjoyable--- but the ending was so abrupt that it made you wonder if the writer had left it unfinished for a while-- and then came back to the story just wanting to 'get it done and published, already!"