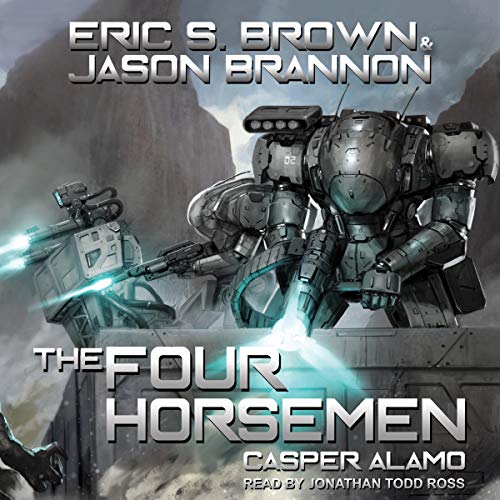 CASPers - Combat Assault Systems, Personal - are the lords of the future battlefield. The massive mechs were created to give humanity an edge against the rest of the mercenary forces in the Galactic Union.

Just like today's tanks, though, massive amounts of armor and weaponry just make the CASPers "hard to kill", not "invulnerable". There are things in the galaxy even stronger than the CASPer, and when humans run up against them, it's up to the human inside to figure out a way to snatch victory from the jaws of defeat.

CASPer Alamo includes two new stories by Eric S. Brown and Jason Brannon, loosely recreating the Battles of the Alamo and Isandlwana on a galactic scale. When all seems lost, it's up to the mech operator to save the day!

What listeners say about CASPer Alamo

Story is super weak and drags on

I tried to finish the story and made it half way before I couldn't take it anymore. The plot is super thin and is just dragged out. In my opinion the only connection this story has to the main universe is it has the Caspers. save your time and money and skip this book

Not expecting a literary masterpiece but...

Wow, just wow. This is bad in just about every way an audio book can be. The stories are both cliche, overly predictable, and dull. The characters are not memorable, the creatures they face; generic. The narrator is just as disinterested as the listener. Lacking character, inflection, or range you’d think they were reading stereo instructions as opposed to a pulp sci-fi action romp. I increased the play speed to get through it. Skip this one, it detracts from the rest of the 4HU.

So far my least favorite entry in the 4HU.

I finished the first story and it was a bit of a struggle. Second one just isn't going to happen