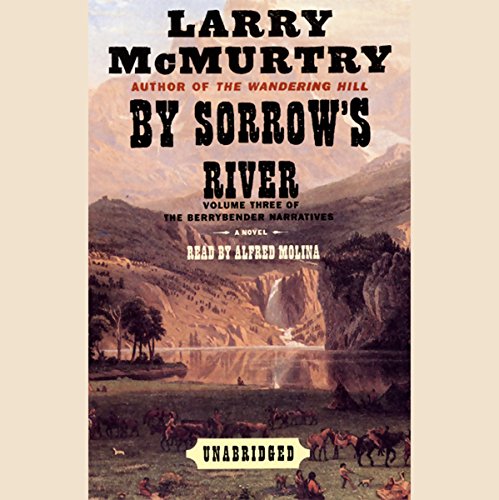 At the heart of this third volume of his Western saga remains the beautiful and determined Tasmin Berrybender, now married to the "Sin Killer" and mother to their young son, Monty. Although Tasmin intends Montyto be an English gentleman like his grandfather, he lives the childhood of a savage.

By Sorrow's River continues the Berrybender party's trail across the endless Great Plains of the West toward Santa Fe, where those lucky enough to survive the journey intend to spend the winter. Along the way, Tasmin, whose husband, Jim Snow, has moved out to scout ahead, falls in love with Pomp Charbonneau, only to see him killed by the ruthless commander of the Spanish troops.

The Berrybenders meet up with a vast cast of characters from the history of the West: Kit Carson, the famous scout; Le Partezon, the fearsome Sioux war chief; The Ear Taker, an Indian whose specialty is creeping up on people while they are asleep and slicing an ear off with a sharp knife; two aristocratic Frenchmen whose eccentric aim is to cross the Great Plains by hot air balloon; a party of slavers led by the cowardly but bloodthirsty Obregon; a band of raiding Pawnee; and many other astonishing characters who prove that the rolling, grassy plains are not as empty as they look.

What listeners say about By Sorrow's River

A perfect conclusion to an outstanding trilogy!

Each book of the Berrybender trilogy has been better than the last. Narrator Alfred Molina continues to impress with his retinue of superb voices and accents, and the characters themselves have grown and (hard to believe) matured. This is Tasmin's book, by and large, though plenty of new and old characters come and go. she is enormously entertaining, witty, and resourceful to match her lascivious nature, and her cutting putdowns deserve saving for the reader to use in special cases in real life later!
I have rarely enjoyed a read as much, and must say the trilogy was too short for me!

Thought this third edition of the Berrybender’s saga on the American plains was much better than the first two. Could be just I’m just settling in with the cast of charters, but there were more action to liven up the read. I was disappointed in the ending of this part of the story. Did not see that coming.

All of a sudden I realized I was listening, not to the wild west story I'd signed up for; having read the previous two books in this series, but rather Harlequin romance of sorts. Yeesh.

The Berrybender novels are all a wonderful romp in the West. There is so much to entertain and intrigue the mind that it’s almost too much to bare. I love them all.

No real point to any of this and quite disrespectful to actual mountain men who lived. The soft pornographic element was wholly unnecessary.

Alfred Molina is one of the best readers I've heard on an audiobook. And the story is classic McMurtry.

Well written with lots of laughs

Where does By Sorrow's River rank among all the audiobooks you’ve listened to so far?

I love Larry McMurtry novels, especially the historical fiction ones. This one has such fun characters that you will find yourself smiling and enjoying a laugh out loud.

I enjoy all the Barrybender girls. They are so smart and hedonistic.

As the Americans are captured by the Mexican soldiers, made up of boys and a couple of officers. The way the captain explains to himself why he hates Pomp is so true to life. Though it appears crazy to us. So well written.

If you could take any character from By Sorrow's River out to dinner, who would it be and why?

It would have to be Tazman. She is so interesting.