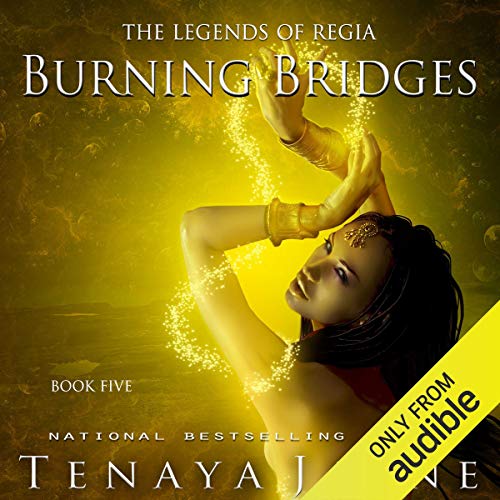 Kidnapped, tortured, and used as bait, Forest's life hangs in the balance as Copernicus moves forward to claim the throne. In the shadows, an army of slaves, waits to deal Regia's new republic a killing blow.

After the insurgent's first strike, a wave of rage builds through the races. No one is ready to lay down and hand Copernicus what he wants. But time is running out for Syrus to save Forest and their baby. Turned into a drone, and weighed down with guilt, Redge tries to break free of the grasp of the insurgents. The only person who can help him is the woman of his past.

Lives will be lost, reluctant heroes will rise, and past flames will be rekindled. Regia must rise against Copernicus, but on the horizon, an even darker shadow lengthens over the land.

A bit violent but overall good.

Have to say that I did skip some POV's that wasn't Forest or Syrus because well, I'm just not interested and it's boring. However, I didn't skip Reg's story and his love because he was a really cool and sexy character. I wasn't at all happy though when Reg got mixed up with being a slave and he was forced to beating up Forest but it all worked out fairly quickly I might add. So far, this author doesn't drag out parts that some authors drag on for chapters or books at a time, which is so frustrating to me. They are short and I love that! Syrus and Forest are still in deep love and are hilarious together. They are one of my favorite main characters of all times. Some sex but not all that descriptive but I would have liked it to have been. No cussing to speak of but some violence that gets pretty colorful. Yuck.

these books just keep getting better and better

I love these books.... and can't wait to listen to the next one. they are well written and the narrator does a excellent job with all the different characters and she doesn't make them all sound the same either so you sort of know from the tone of voice etc which character she is reading.

I can't believe I didn't find this series sooner. I just love it. great world building and an great narrator!

Great series folled with intriguing characters and a wonderful action-packed plot. I'm looking forward to the next novel.

I STRUGGLED TO FINISH THIS OR THE PREVIOUS TITLE'S AT ALL. I ALWAYS FALL ASLEEP DURING AN AUDIBLE BOOK BUT THIS ONE IS ONE OF THOSE BOOKS SERIES THAT ARE SOME OF THE VERY BEST RECORDED AND WRITTEN ! I ABSOLUTELY LOVED EVERY BIT FROM THE VERY BEGINNING TO THE END AND I AM ALREADY WORRIED THAT AFTER THE NEXT BOOK IN THIS SERIES OF BOOKS THAT IT WILL BE OVER AND THEINSPIRATIONAL,HEARTWARMING,
ADVENTUROUS STORY AND THEN I WILL HAVE TO SETTLE FOR SOME NOT SO GREAT BOOK TIL THE NEXT TIME I GET LUCKY ENOUGH TO HAVE FOUND A BOOK AS GREAT AS THIS ONE HAS BEEN AND IT ISNT FREQUENT THAT I USUALLY FIND ONES AS EXCEPTIONAL AS THIS ONE IS!!!!

What made the experience of listening to Burning Bridges the most enjoyable?

I couldn't stop listening! It was so so so exciting, everything was going wrong and you didn't know what was going to happen next! Can NOT wait for the next book especially after the cliffhanger ending!!!!!