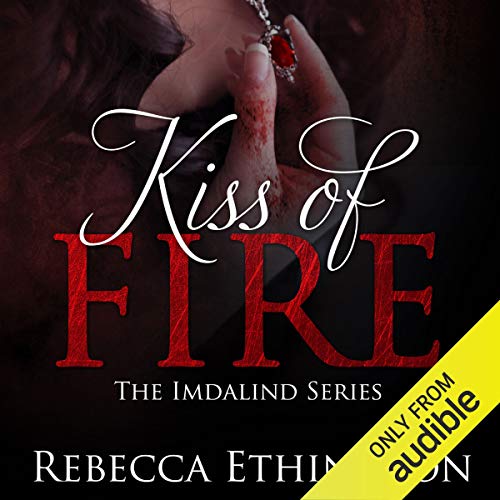 By: Rebecca Ethington
Narrated by: Eileen Stevens
Try for £0.00

"I couldn't stop reading.... I bought her others just as soon as I was done and read them all in three days, they are that good." ( USA Today best-selling author Quinn Loftis)

Joclyn Despain has been marred by a brand on her skin. She doesn't know why it appeared on her neck, but she doesn't want anyone to see it, including her best friend, Ryland, who knows everything else about her. The scar is the reason she hides herself behind baggy clothes and won't let the idea of kissing Ryland enter her mind, no matter how much she wants to. The scar is the reason she is being hunted. If only she knew that she was. If only she had known that the cursed stone her estranged father sent for her 16th birthday would trigger a change in her. Now she is being stalked by a tall, blonde man and is miraculously throwing her high school bully 10 feet in the air. Joclyn attempts to find some answers and the courage to follow her heart. When Ryland finds her scar, only he knows what it means and who will kill her because of it. Kiss of Fire is book one of five; it is a clean young adult paranormal romance. Language: low to none. Violence: mild to moderate. Sexual content: low to none.

"Interesting and intense. Do not miss this series." ( USA Today's Happily Ever After blog)

What listeners say about Kiss of Fire

I wouldn't generally spend my time writing a review but this book is so bad.... the characters are completely on dimensional and selfish. I like bad romances but this is not worth the money/time

First love is not always your true love.

The Imdalind series is one of the best series I've ever read. This book #1 is a great start but don't judge the series yet based on this first book. It does start a bit slow but picks up about halfway through. So much happens in the later books that this series becomes an epic masterpiece.

Kiss of fire sets up everything. We meet Jocelyn and we meet Ryland her best friend who she secretly loves.

I don't want to spoil anything but I will say things start to get really good when the sexy Ilyan shows up. Move over Ryland, you don't hold a candle to Ilyan.

Each book in the series gets better and better. I urge you to keep reading them. Eyes of Ember is even better and I absolutely adore Scorched Treachery and Soul of Flame.

Story is great.
Love story is EPIC
Writing is flawless and beautiful
Narration is also great

Read the first book. Only okay. Read the second book.... dang, it was a rerun of the first. Same bad guys that never get stopped, never get killed, even though she is the strongest magician in history. It just repeats itself chapter after chapter. This is a love story and they string it out. I finally gave up on the third book deciding that I don't want to punish myself with all seven volumes. Romance is okay but I want a real story that moves forward and unfortunately, this one is not it. If you love romance, it may be for you.

What made the experience of listening to Kiss of Fire the most enjoyable?

It was good until the end. The fear overwhelmed the lead character in that she never infused the damn crystal. which I didn't understand. The only part of his soul left is with her.

Would you be willing to try another book from Rebecca Ethington? Why or why not?

Yes and NO!! If their isn't additional books to go with it. then I wouldn't.

Have you listened to any of Eileen Stevens’s other performances before? How does this one compare?

I was made when Joschlin didn't use crystal to help her man. She used it during his TV appearance.

A Little girl with too many fear issues and supposed to be powerful. She needs to go all out or go home with all that crying crap. . .

Young or stupid or both!!!

I have no idea why this book has such good ratings. The heroine is afraid of her own shadow and almost gets everyone killed. Everyone covers for her. Readers advisory on YA novels can be tricky. I would think most teens girls would have trouble relating to this lackluster character.

That ended so emotionally andI really can’t wait to start the next book. Narrator does an awesome job too.

Oh, here there be a love triangle! After being attacked by something as a young child our MC falls in to a coma and gains a mark. When she awakens a month later it's to major upheaval in her life where nothing is as it seems. A teenager in high-school now, love is in the air and an entire group wants her dead.

I got this book thinking I most likely wouldn't like it very much. well, I freaking loved it. I can't wait for the next one. I hope its as good or better then this one. so most likely it will suck. I'll let you know how it is when I'm done. great work. and the narrator did a wonderful job as well

I found this book to be very entertaining, exciting, and fun! The story line was well done, the characters believable, and the narration excellent. I have recommended this book to my friends to read.

I was hooked from the minute i read this

I LOVE this series so much but Im not the biggest fan of the narrator. She seems so monotone and unconvincing, almost as if shes trying too hard, which sucks so much because it takes away from the story and character developments.

This is the sorriest heroine I have every listened to. I sped the audio up to 1.25 just so I could get through the book. I hate not listening to a book I have purchased. I really want to slap this chick silly! This girl has the backbone of an over cooked noodle. Absolutely will Not be listening to book 2. However, the narrator was excellent.