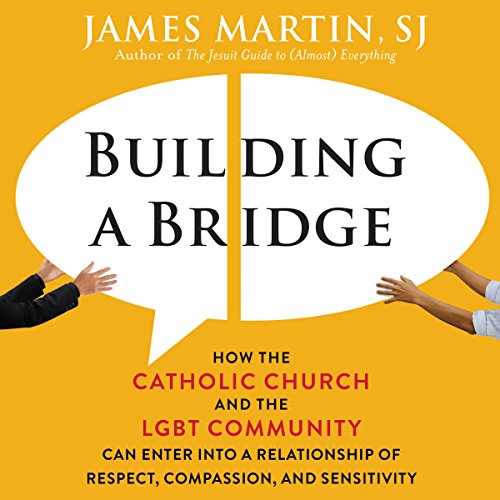 The New York Times best-selling author of The Jesuit Guide to (Almost) Everything and Jesus: A Pilgrimage turns his attention to the relationship between LGBT Catholics and the church in this loving, inclusive, and revolutionary book.

On the day after the Orlando nightclub shooting, James Martin SJ posted a video on Facebook in which he called for solidarity with our LGBT brothers and sisters. "The largest mass shooting in US history took place at a gay club, and the LGBT community has been profoundly affected," he began. He then implored his fellow Catholics - and people everywhere - to "stand not only with the people of Orlando but also with their LGBT brothers and sisters." A powerful call for tolerance, acceptance, and support - and a reminder of Jesus' message for us to love one another - Father Martin's post went viral and was viewed more than 1.6 million times.

Now Martin expands on his reflections in this moving and inspiring book, offering a powerful, loving, and much-needed voice in a time marked by anger, prejudice, and divisiveness. Adapted from an address he gave to New Ways Ministry, a group that ministers to and advocates for LGBT Catholics, Building a Bridge provides a road map for repairing and strengthening the bonds that unite all of us as God's children. Martin uses the image of a two-way bridge to enable LGBT Catholics and the church to come together in a call to end the "us" versus "them" mentality. Turning to the catechism, he draws on the three criteria at the heart of the Christian ministry - "respect, compassion, and sensitivity" - as a model for how the Catholic Church should relate to the LGBT community.

What listeners say about Building a Bridge

As a former Roman Catholic, I presumed that this book was a gateway for the church to be more understanding of the LGBT. After listening to this book, I found it to be very underwhelming. It does not pave a way forward for the church to change its stance on the LGBT nor does the author truly accept the people within this group. If you expect the LGBT to still recognize the legitimacy of the clergy, you need to embrace them with open arms. It was like the author was happy in upholding the status quo instead of breaking down barriers that restrict these members of the church from serving. People will not remain in an institution that refuses to reform.

Where is the extended version that was promised?

So much left unfinished. I might have rated it more highly if Father Martin had come back with “Part 2.”

With Respect, Compassion, and Sensitivity

I have followed the Pope (in Latin and English!) on Twitter for years, even before Pope Francis became Pontifex. I’m Catholic but non-practicing, and a graduate of a Catholic University. When things are scary and out of control, I still look to the Church for comfort. I found and followed Father James Martin, SJ, on Twitter, after the June 12, 2016, Pulse Nightclub Massacre in Orlando, Florida. His words were comforting then, and they still are.

“Building a Bridge: ow the Catholic Church and the LGBT Community Can Enter Into a Relationship of Respect, Compassion and Sensitivity” (2017) is the beginning of the use of the Catechism of the Catholic Church to support the lives and the faith of Lesbian, Gay, Bisexual, Transgendered, Queer or Questioning and their Allies. I am using the term “beginning” because I think it’s a very good start for a stronger, more inclusive and diverse Church. There will be more to come.

In his introduction, Father Martin explains that he uses the term “LGBT” not to exclude, but because that’s what's in common use at this time. The first part of the book is addressed to the Church and its outreach to the LGBT community. “Jesus recognizes all people, even those who seem invisible in the greater community . . . Catholics therefore have a responsibility to make everyone feel visible and valuable.” The second part of the book is addressed to LGBT persons, and asks for patience, understanding and forgiveness. Importantly, Father Martin acknowledges the sense of betrayal many LGBT people felt and still feel. Helpfully for non-Catholics, Father Martin includes a brief discussion of the structure of the Church and why something said by a priest in a homily may not be Church doctrine.

The book is quite practical. It has specific suggestions for people to talk to each other about these important issues. There’s a study section, with scriptures and suggested questions to meditate on, and talk about. It’s a way to open a dialogue, which is what Father Martin wants.

What this book does not do is either support or condemn same sex marriage; question the Church’s teachings; discuss sexual morality; argue for a change in Church doctrine; or undermine the authority of any person in a position of authority in the Church, from parish priests at individual parishes to the Holy Father.

Father Martin narrates the book, and he is quite good.

Father Martin addresses an issue that has for too long been ignored and a group that continues to be vilified. He reminds us to act like Jesus and minister to the marginalized.

All Catholic and people in general should read this book. Many Catholic parents have probably thought they had to choose between leaving their religion or rejecting their children. This book offers much hope.

This is definitely a great book. I would expect nothing less from Father James Martin.

Worth a read. Important topic.

Essentially the essay I read a while ago by Father Martin. Great insight and compassion. I'd imagine that LGBT Catholics may find it weak sauce, but it's a thoughtful general audience book.

I do love the Jesuits and wish I was a couple of years younger to join the brothers.
Again not surprising an open mind. The book has added to my ministry working with LGBT police and fire officers.

Fr. Martin has a Catholic message of love. Thank you for showing us what love reads and sounds like!

I love the book. it was good to hear about the ways relationships with each other.