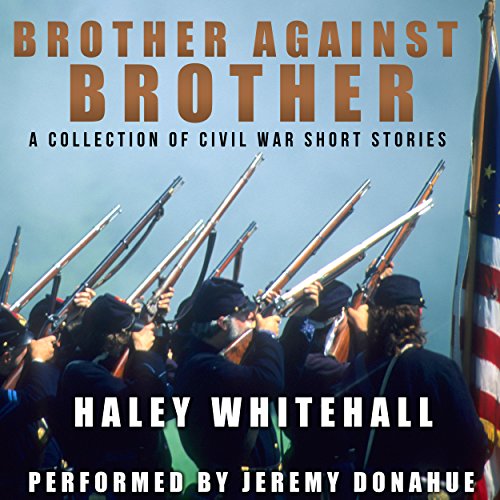 For those of you who want to experience the War Between the States in one sitting, this is the book for you. Brother Against Brother is a collection of six Civil War short stories and two excerpts from both Union and Confederate points of view.

This collection gives listeners many different perspectives: drummer boys, brave-hearted soldiers, a prisoner of war, and even a young lady waiting at home for the war to end. Through every word, feel their terror, determination, pain, relief, and joy.

A young orphan enlists as a Union drummer. What great feats can the littlest soldier accomplish?

This is an excerpt from Grits and Glory. Abolitionist, Peter Warren leaves behind his fiancée in order to fight for a cause he believes in.

A soldier sees the elephant for the first time. His experience is eye opening, and he soon learns that war isn't what he expected. The hype from the patriotic lads back home had been a bunch of lies.

This is an excerpt from Journey to Glory. Told partly from a dog's point of view, he and his young master enlist in the Confederate Infantry.

A poor southern woman comes across a message for help. When he finds the wounded Union soldier, she thinks that they can actually help each other.

Elijah lied about his age so he could enlist as a musician. Brought up as a Quaker, he doesn't believe in war, and he wanted to avoid the draft. But will war change his beliefs?

Thomas was eating breakfast at his sister's house when a knock at the door turned his life upside down. Union soldiers have taken possession of their Southern town and have orders to torch the place. Taken prisoner, Thomas is surprised to meet a Yankee friend.

A Civil War veteran reflects on the war and shares his wisdom with his grandson, Robbie, who wishes he'd been a drummer, too.

This is a collection of eight short stories (two of which were excerpts) set in the States during the Civil War period. Each story has its own characters, and its own messages. There's one message that lies all the way through: no good ever comes out of a war.

The stories present the brutality seen by the soldiers, the uncertainty and doubts of the soldiers as they enlist- not really knowing what they're getting into. Causing such heartbreak in their homes: one soldier enlists leaving his fiancé behind, others fake their age, they run away to war, run away from war and face the tough climate of poverty. Or sign on as confederates to obtain information from the other side, only to then become prisoners of war. I have to say my favourite story was that of the soldier and his loyal dog. I adore dogs, and this story was so sweet. Then there was that of a son's broken promise to his mother, which was such a powerful tale.

I don't want to get too much into the stories, since they're quite short (average length: 15 minutes, based on the audio book version). This collection was well written, you could almost envision the scenes playing out. I'd say the narration by Jeremy Donahue helped picture the stories, and gave life to the messages of each tale and obviously, to the voices of the characters.

There were sad tales, touching and heartfelt, but no profanity, graphic violence, sex. I'd say they are suited for anyone over 12 years of age.

I received this book through Audio book Boom.

It's difficult to find good fiction stories on the American civil war era. When I came across this book, I thought I had finally found what I was looking for: A variety of short stories about all sorts people who's lives are influenced by the war.

Unfortunately, I was wrong.

The stories were, piece by piece, incredibly mediocre and predictable with no exciting twists or surprises. They might be more suited for a younger audience to, perhaps, spark their interest in this part of history in an easy accessible way, but that is all it's good for.

A good example of this was the story about a drummer boy; told from the point of view of his dog. (&quot;My life's purpose has just taken on a whole new meaning! I wasn't just here to protect my master, I now had a whole company of men! They WANTED me. They NEEDED me. They ACCEPTED me. I belong with my master and was happy to be here as their mascot!&quot;)

If you are looking for a more fact-based, intriguing, thought-provoking piece of fiction and want to catch a glimpse of what life might have been like during that era for people of all sorts of different backgrounds... This book is not for you.

The narrator's performance was, on top of the characterless stories, below average. His way of reading reminded me of a young father trying to read their kid a bedtime story. His voice wasn't BAD but he gave no indication whatsoever that the story had ended. I often found myself double-checking to see if there was something wrong with my audio.

Don't buy if you are looking for something serious or enthralling. There are better alternatives out there.

What did you love best about Brother Against Brother?

The book was written around the civil war but not really about the war itself. The main thrust of the book are stories about the people, Some the soldiers, wives, sweethearts and husbands.
Some of the stories are sad and others will make you smile; for instance one about a boy and his drum that seems was as big as he was

What other book might you compare Brother Against Brother to and why?

Band of Brothers as it was about people, loyalty, duty and friendship given the backdrop of WW2

He gets into the stories and it was easy to sense he enjoyed reading them. He does not race through as he reads but keeps a good pace thats easy to follow with ones mind eye

yes. Not to give it away but I very much liked the story written from the perspective of a dog that follows his master.

This book is not overly long and was very enjoyable. There is romance and heartbreak and tales of courage and duty. I think men and women will both enjoy it. Its not very violent and I would not have a problem giving it too a early teen to listen too

I was pleasantly surprised by how wonderful and well written these short stories are, and they do indeed pay close attention to the era they are set in. I found the short story "Confederate Mascot" to be particularly charming, as it’s written in the view points of both of a loyal and loving dog, and his master. All the stories have emotion and close attention to detail, and if you’re interested in the American Civil War you should give this book a try. Each story isn’t very long, so you can enjoy them one sitting at a time.

As for the narration, Jeremy Donahue did an absolutely fantastic job narrating this book. He really captures the personalities and raw emotions of every single character in each story!