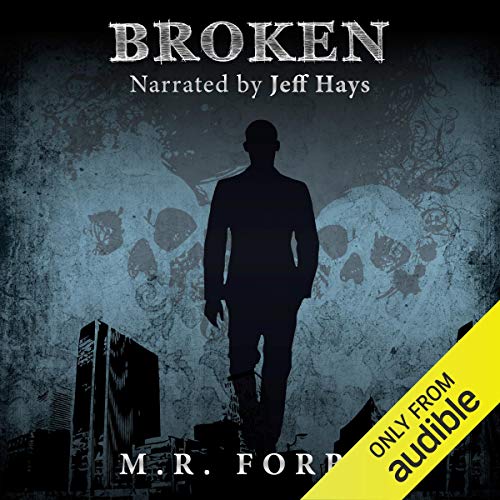 My name is Landon Hamilton.

I'm the only thing keeping the universe in one piece.

I thought fighting angels and demons was a tough gig, but now I'd give anything to go back to the not-that-good, not-so-old days. There's a new game in town, and it's one that's threatening to destroy everything that has ever been created.

Oh, and my friends and I are the only ones who can stop it.

I'm totally hooked by this series of books

You are sucked into the world of the characters of the book. You feel what they feel and find yourself rooting for the good guys and really hating the bad.

A marvelous continuation of the series

Where does Broken rank among all the audiobooks you’ve listened to so far?

I would rank Broken as the second best audiobook I've listened too, behind only "The Legend of Drizzt: The Collected Stories:. I would actually rank this book ahead of The Legend of Drizzt based on the audio, narrator Jeff Hays pulled out all the stops and this has definately been my favorite book narrated by him.

Which character – as performed by Jeff Hays – was your favorite?

There were too many characters in this book that I enjoyed to pick just one, but a few of my favorites would be:
1) The Beast - Jeff's ability to imbue such pure destruction, anger, hate and pettiness into this character was flawless.
2) Landon - The character has grown and changed so much over the three books that he is almost a different character from when he started. Jeff did a great job bringing that growth and change to life.
3) Ulnix - The way Ulnix has changed from when we first met him is startling. He was nothing but a ravening beast at first, but his exposure to Landon and Josette has turned him into an almost tragic hero. I can't wait to see what happens to him after this book.
4) Josette - The journey for Josette in this book is amazing. The scene where Josette proves to Landon just how powerful her faith in god is, is one of my favorites. I actually had a lump in my throat by the end of the scene and I kept wishing it didn't happen the way it did.

I wish I could have just sat down in a room and devoured this book.

This book is by far my favorite of M.R Forbes and also of Jeff Hays. The writing is heads and shoulders above what he had done previously, especially the 2nd book. I did not want the book to end and at least there are still two more books in the series.

Jeff really stepped up his game on this one. I have enjoyed the narration and production that he does for all his books, but this one was in another league. His ability to make me picture the voice of the Beast coming from multiple bodies at the same time, or being able to conjure up what a creature looks like is astounding.

As always his ability to create different voices for different people, including men and women is well done (I almost feel like a broken record saying the same thing on every review).

Bravo to both M.R. Forbes and Jeff Hays.

And the plot thickens...

So I am currently on the 4th book in the Divine Series, Bound, so needless to say I am already a fan of this series. One of the other reviews noted that the story is a lot of action with little release, and in this one I tend to agree, but this only happens over about 3 or 4 chapters, so its negligible in terms of the book as a whole. I liked #2 a little bit better and I really like #4 which I am currently listening to. So if you liked the series so far, there is no reason to not continue with it. Again the narration is awesome. I totally forget when Sarah or Charis is speaking that this a man narrating. There is never any question about which character is speaking. I highly recommend this book. If you haven't started the series yet, be warned, you will get hooked. Jeff Hays does such a great job with the characters that I honestly feel as is Landon is in my passenger seat every morning on my commute. If you don't think you will like this series, check out the narrator's other works. This is the best narration I have found on audible.com!

Good book but overloads the reader

This is the third book in the series. This one was ok, but a much harder read than the previous ones. I definitely had to put this one down several times and come back in order to finish. Every bit of the book is non-stop action and mostly failure. Several of the actions of the characters do not make a lot of sense and seem to be more filler for the story than anything.

This novel has what I would call climax overload. It just keeps going on and on building and building without any relase. The heroes would solve a problem, usually get outwitted, and immediately roll on to the next point with nothing to break it up. The only novel I have seen similar to this was the last novel of the Wheel of Time series as far as too much buildup to the point it became more frustration than entertainment.

Still, it was enjoyable and does come to a satisfactory end. I will say that the tone of the series has gotten more angst ridden, whiny and at times down right emo. I definitely do not like that. Although, with what is going on in the book who can blame them for being down. Fortunately it seems that the author figured that out and fixes it in the next book of the series.

The world and over-arching story of this series is great. There is tons of action (a bit too much actually) and is fun, but you may have to break up listening to this one to really enjoy it. Still, if you liked the previous books in the series you will want to read this one. It really is a 3.5 star book but I don't have that option as it is better than a 3 but not really a 4. it is worth sticking with the series to see how things turn out.

Another fantastic series by Forbes.

At this point I will read or listen to anything Forbes has put out. His storytelling and character development are simply superb

tedious without a lot of imagination

So much potential, but none fullfilled....

I think maybe this would be an okay book for a teenager.

What was most disappointing about M. R. Forbes’s story?

He brings into play the idea of purgatory being a third power in the never ending fight between good and evil, but then doesn't describe purgatory much at all. The "King" of purgatory Dante is also pretty much a blank slate because he is not given much of any description at all accept he is the famous Dante from Dante's Inferno. When the big bad comes into the story it gets slightly more interesting and more in depth....but only just so.

Would you be willing to try another one of Jeff Hays’s performances?

He did okay. His voice was smooth and easy to listen to, but I hardly felt any emotion from him. That may be because of the writing though and not his fault.

I stuck with the series because I was hoping it would get better. It never does.