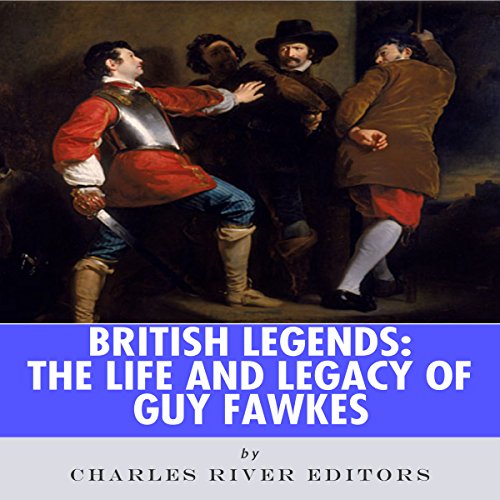 British Legends: The Life and Legacy of Guy Fawkes

By: Charles River Editors
Narrated by: Jannie Meisberger
Try for £0.00

In 1605, Guy Fawkes was one of over a dozen conspirators in the famous Gunpowder Plot, an attempt to assassinate England's King James I. When the plot was discovered on the 5th of November, Fawkes and other conspirators were quickly convicted and executed, and the King asked his subjects to remember the 5th November as "the joyful day of deliverance".

Fawkes was but one of a countless number of failed assassins, but in a perversely ironic way, the King's declaration ultimately turned the 5th November into Guy Fawkes Day, a celebratory day that usually had children creating an effigy that would then be burned in a bonfire. While the effigy was usually Fawkes, others made it a custom to burn an effigy of the pope, a tradition that came to the Thirteen Colonies in America as well. Though he was only one of the plotters, Fawkes became the one most associated with the act, and he was viewed as a symbol of treason.

A strange thing happened, however, in the 19th century, as Fawkes began to undergo a sort of character rehabilitation, beginning with William Harrison Ainsworth's 1841 historical fiction Guy Fawkes; or, The Gunpowder Treason. Suddenly, Fawkes became an anti-hero who had the best interest of the public and was taking action to effect change. Other British literature of the century depicted Fawkes as a kind of action hero. In 2005's Remember, Remember: A Cultural History of Guy Fawkes Day, writer J.A. Sharpe noted Fawkes is sometimes remembered tongue-in-cheek as "the last man to enter Parliament with honest intentions."

What listeners say about British Legends: The Life and Legacy of Guy Fawkes