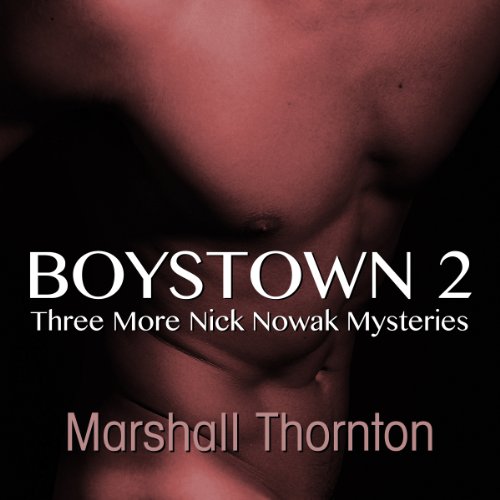 By: Marshall Thornton
Narrated by: Brad Langer
Try for £0.00

Set in the second half of 1981, Boystown 2 follows Nick as he juggles his deepening relationship with Detective Bert Harker with the return of his ex, Daniel Laverty. Which man will he choose? Or will he be able to choose?

What listeners say about Boystown 2

Loving this series of books. Follow Nick Nowack Private Investigator as he works on various cases, plus we delve deeper into his love life. I think these books are set in the 1980s as I can relate to a lot of things. Great books. Great narration.

I'm enjoying listening to the gritty PI stories in this series and following Nick Nowak's personal life. The narrator's voice and style matches the main character's personality and his narration is easy to follow.

I liked that these stories are set in the early eighties and that there's an overall romance ARC to the series. We witness the smoking, the homophobia shown by the cops, as well as Nick's frequent unprotected sexual encounters with strangers. You get a snap shot of life in Chicago nearly forty years ago. I have my guesses where this story is leading for one or two secondary characters.

Nick comes across as a likeable and hard-working character, whose heart is in the right place much of the time. I'm rooting for him to get his happy ever after later in the series.

The second book in the Boystown series is just as good and addicting as the first book. Nick Nowak is a private investigator and deeply flawed man who finds himself embroiled with in life or death situations. The three mysteries that this book contains are both fascinating and thrilling, while the overall series plot continues to build and grow. It’s hard to not like Nick despite all his faults – he’s a man who’s experienced a lot of heartache and trauma in his life and his methods of dealing with these hurts are not always healthy or respectable—however, it is understandable. I fell in love with this series unexpectedly and this sequel only made me hungry for the next book.

I hadn’t read part 1 but it was really easy to get into the character and surrounding story. I am looking forward to the rest of the series.

I'm hooked on these mysteries...love the narrator...all in all great way to spend your time. Very entertaining...cant wait to listen to the third chapter in the series.

EYE-OPENING LOOKS INTO THE CHICAGO GAY LIFE OF THE

The narration is a little monologued but tells a great story.

4 Blue Roses
4.5 Blue Flames
Narrator Brad Langer dryly delivered the Nick Nowak Mysteries series. His emotionless monotonous narration is as old skool as the plot itself, which for some reason drew me deeper into the life of the most sexually active private investigator; Nick Nowak.

The cases he investigates are kind of intriguing. The longer I listened, the more I wanted to hear. The plot time is depicted in the 1980s. It’s the time of no lube or condoms, only spit, and if you are lucky maybe vaseline. Venereal diseases and GRIDS, or gay-related immunodeficiency syndrome, is just being noticed. Nick, is a dude who has a lot of sex. If it’s male and willing, he is fucking it. I’m not judging, good for him, the more sex the better, but unfortunately in hindsight, we know what happens with HIV. Each time Nick is having sex, I see more and more men getting infected. That left me conflicted between listening and enjoying hot sex scenes.

The victimization of gay men is vividly described, the book conveys a silent internal truthfulness, a very lifelikeness of being gay in the 1980″s, and the reality or consistency of the sad world these characters lived within.

I do recommend this series. It’s one of those, you would miss if you don’t experience it.

Smoothly fits in the series but is a cliffhanger

I just finished these stories and I would advise this series be read/listened to in order. Each mystery is sort of a standalone but the personal part of the story is ongoing. I’m really enjoying these stories and getting a little impatient when it comes to Nick’s personal life. Nick is a P.I. who appears to me to half know what he is doing and half lucks out. As he goes through his daily life he looses his attention because of his personal life. He does get the job done but its entertaining to me his daily routine. I feel he fits the Mickey Spillane feel. He is still being reckless in his sex life. I didn’t feel he was as bed hopping in this part of the series as the last. He does have a few guilt feelings that he may be sort of cheating on Bert. Nick’s sort of in a relationship with Bert and then his ex Daniel reappears. That makes him ready to break up with Bert. Nick is centered on Daniel no matter what else he does. Where the cliffhanger got to me is I’m waiting to find out where he is going to end up relationship wise. Before he can break up with Bert there is a little twist in the story. Now is there more to the detective than I had thought? There are no answers in the story so I have to get to the next to see where this is going. If you are easily offended with cheating and very descriptive sex don’t read/listen to this series. It is meant to be all of that and more. It reflects life in the 80’s and I think the author does a great job of giving a feel for that era. The narrator Brad Langer, does a perfect job. He gives the feel for this story.

Better with each book

I like the kind of PI Nick is. He's old school, gritty, and smart. The sex in the stories is icing on a nicely done cake. All Nick's casual hook ups makes me think he's marking time until he's back with Dan. Laughs, intrigue, drama (angst in my head for Nick and Dan and Bert)! I'm a romantic, sue me!! The love triangle thickens and what a cliffy and close call at the end!! On to book 3. The narrator was excellent with voices and expressions. I voluntarily listened to a free copy of this story and am giving an honest review.

I am enjoying this (to me) new series of gay detective novels. I recommend it.