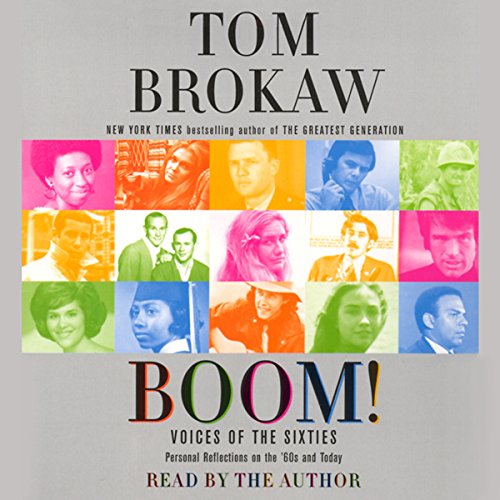 In The Greatest Generation, his landmark best-seller, Tom Brokaw eloquently evoked for America what it meant to come of age during the Great Depression and the Second World War. Now, in Boom!, one of America's premier journalists gives us an epic portrait of another defining era in America as he brings to life the tumultuous Sixties, a fault line in American history. The voices and stories of both famous people and ordinary citizens come together as Brokaw takes us on a memorable journey through a remarkable time, exploring how individual lives and the national mindset were affected by a controversial era and showing how the aftershocks of the Sixties continue to resound in our lives today. In the reflections of a generation, Brokaw also discovers lessons that might guide us in the years ahead.

Boom! One minute it was Ike and the man in the grey flannel suit, and the next minute it was time to "turn on, tune in, drop out". While Americans were walking on the moon, Americans were dying in Vietnam. Nothing was beyond question, and there were far fewer answers than before.

Published as the 40th anniversary of 1968 approaches, Boom! gives us what Brokaw sees as a virtual reunion of some members of "the class of '68", offering wise and moving reflections and frank personal remembrances about people's lives during a time of high ideals and profound social, political, and individual change.

Remarkable in its insights, profoundly moving, wonderfully written and reported, this revealing portrait of a generation and of an era, and of the impact of the 1960s on our lives today, lets us be present at this reunion ourselves, and to join in these frank conversations about America then, now, and tomorrow.

What listeners say about Boom!

This is my favorite book of all time. Only partialy because I am a boomer but because it explained to my the why of so many things from my childhood. News that I was to young to understand when it happend and was to new for history books. I grew up with Brokaw on the news and have always found his voice comforthing. Listening to him read the book was listening to him tell a story. It does not have the feel of being read to. There needs to be more books like this out there. Telling us the whys and how items became history

Excellent Commentary of a crazy period of time!

Mr. Brokaw did a good job encapsulating that period of time by giving the perfect overview of the good AND the bad without belaboring either. I enjoyed the book.

I purchased this book mainly to hear Tom Brokaw I miss his voice his view on world events. I enjoyed how he honestly and fairly told of the 60's and its major moments. Being born in the early 70's myself it was nice to learn what came before .

Nothing new. Nothing really insightful. Spends way too much time criticizing the present administration. Just couldn't make myself listen the entire dribble.

Well thought out, easy listening, especially for me, I was starting college when JKK was assasenated and finishe Med school when Nixon resigned