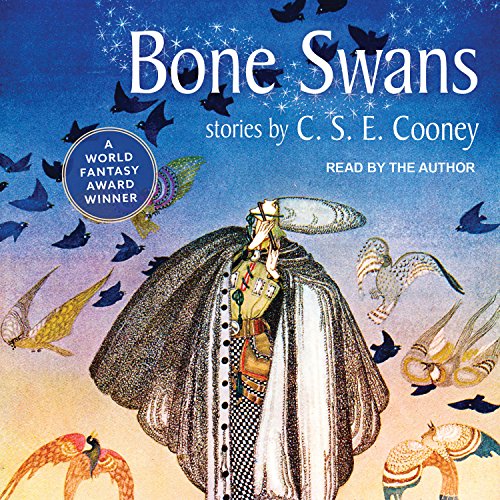 In this debut collection from C. S. E. Cooney, a swan princess hunted for her bones, a broken musician and his silver pipe, and a rat named Maurice bring justice to a town under fell enchantment. A gang of courageous kids confront both a plague-destroyed world and an afterlife infested with clowns but robbed of laughter. In an island city, the murder of a child unites two lovers, but vengeance will part them. Only human sacrifice will save a city trapped in ice and darkness. Gold spun out of straw has a price, but not the one you expect.

What listeners say about Bone Swans

Oh, dear gods. What a book.
It wasn't love at first listen. It's read by the author, and in the forward she came off as drama-class-careful in articulation, very forced and unnatural. I didn't love the beginning of the first story and almost quit altogether.
Then I thought maybe I hadn't given it a fair shot and tried again another day. Still didn't love the beginning of the first story, but I liked it more. And then more. And then it blew my mind.
I actually didn't like ANY of them at first. But the skill of this storytelling doesn't take long to sink its roots into your soul and wrap it up tight. After a few I totally trusted her to make the story sing, and it did- every single time.
I'm not much on short stories because there are always some I like and some I don't. In Bone Swans there are some I love and some that enrapture me. Not even sure which one is my favorite. Probably the Bone Swans. Or the Milkmaid. Or....
Dammit. They're all so, so good.
Even her narration smooths out and becomes more natural as she reads her own stories.
I need to get the paper edition of this. This is for sure a lifelong re-read.

I could not get past the narrator's tone. It seemed almost spiteful. It became extremely distracting and did not fit with the changing moods/scenes of the stories. This made it hard for me to follow what was going on, and so I could not finish the book.

Re-interpretations and Originals. All Fairy Tales.

I almost feel guilty giving the narrator only four stars. I did so because she flattens her voice when she speaks narration, but that's probably to increase the contrast with the many character voices she portrays brilliantly. The title story does not suffer from this at all, as the narration is provided by the most charming rat you'll ever meet.

And there is always something special when an author has the opportunity to narrate their own work. You know for a fact that she knows her own characters, and knows how they speak.

Whether the story is a re-interpretation of (or more likely a mash-up of several) classic tales you already know, or a completely original dreamscape with &quot;once upon a time&quot; settings but modern metaphors, they are all engaging, thought-provoking, and intelligent.

Even the scary after-life clowns.