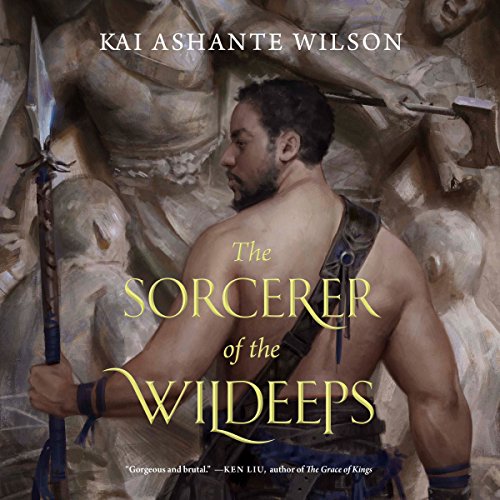 The Sorcerer of the Wildeeps

The Sorcerer of the Wildeeps

Critically acclaimed author Kai Ashante Wilson makes his commercial debut with this striking, wondrous tale of gods and mortals, magic and steel, and life and death that will reshape how you look at sword and sorcery.

Since leaving his homeland, the earthbound demigod Demane has been labeled a sorcerer. With his ancestors' artifacts in hand, the Sorcerer follows the Captain, a beautiful man with song for a voice and hair that drinks the sunlight.

The two of them are the descendants of the gods who abandoned the Earth for Heaven, and they will need all the gifts those divine ancestors left to them to keep their caravan brothers alive.

The one safe road between the northern oasis and southern kingdom is stalked by a necromantic terror. Demane may have to master his wild powers and trade humanity for godhood if he is to keep his brothers and his beloved captain alive.

Way different than anything else

Some of the reviews mentioned lack of character development. I disagree. There was just enough to understand that this is a story of love experienced and then lost. Sometimes the pros made it difficult to understand what was happening but I appreciate how different this writers work is. He definitely has his own unique style and I love that AAVE is legitimized with his work.

Very sad ending but I look forward to Kai's next work.

Although the god-blood flowing in the veins of Demane (AKA Mountain Bear) is diluted, as he was born long after the "gods" (mostly) left the world for the stars, he still has enough to be a candidate for divinity and or transcendence. He keeps his potential power and knowledge under wraps as much as possible, for he's working among superstitious and exploited mortal guard-laborers on a caravan as it heads south towards the Wildeeps en route to mighty Olorum. But though he tries to keep a low profile as unofficial healer, his fellow guards find his skills and knowledge uncanny, his bag magical (holding as it does everything from spears and saddles to medicines and pyrotechnics), and he their Sorcerer. At the same time, Demane is winningly naïve, believing at first that prostitution is a kind of marriage and feeling uncomfortable in and ignorant about cities. Why has he come clad as a semi-naked barbarian so far from the sparsely populated green hills of his home? To escape an undesired marriage? To see the world? To test himself and his powers in dangerous situations? To find his soulmate? Demane is an appealing protagonist, patient, loving, brave, dignified, kind, thoughtful, and modest.

About soulmates, as the novel progresses, it becomes increasingly clear that Demane is in love with the mysterious caravan captain (call him Captain), a tall, lean man of preternatural fighting abilities and endurance. Captain also has the blood of heaven flowing through his veins, and Demane knows that to suit their coarse world the man (?) cramps his vox-seraphica, his singing voice that would otherwise evoke wonder, and hides under a tightly wound head scarf his heliophage (starlight feeding) hair. Demane senses that despite his awesome capacity for violence Captain was made for beauty and love, and his frustrated longing for Captain builds the longer they travel together on the caravan. This same-sex relationship between the protagonist and his lover is still quite rare in genre fiction. Wilson depicts this love naturally and humanely: "Some day I shall run my fingers through my lover's hair. 'Some day.' Of all words none more so purely distills the futility of human hope, mortal dreams."

Wilson's epic sf-fantasy genre novel is also remarkable for mostly taking place among people of color. The dark-skinned men working for the caravan speak African American English, calling each other "brothers" and saying things like, "They got a whole big-ass lake." (Demane speaks their language with them, and mainstream English with himself and Captain.) One of the pleasures of reading the novel is hearing the authentic and savory language in a genre context that's usually white and (at least pseudo) British:

“I ain’t crazy, Sorcerer. So don’t be looking at me like that. I seen it. In the middle of the night, I got up to pee. And seen it by the moonlight: right over in some trees. Standing close as that patch of weeds you see right there.”
“Well, how come you didn’t just wake up some--"
“I was scared, is how come. You should of seen that damn thing! Tall as the captain, Sorcerer, I swear it was. Walking around like anybody. Teeth like this!”

Wilson does a concise and convincing job of secondary world creation. To begin each of his seven chapters he includes excerpts from letters, legends, and the like that shed light on the cultures and gods of his world, and he limits the action and history to one continent. The Wildeeps is a neat creation: a chaotic jungle of magical potential and overlapping times and worlds, so that mere mortals had better not step off the protected Road. And the main story involves a formidable antagonist, a man-eating necromantic tiger who messes with the weather, instantly heals its wounds, and generates power from its stash of decomposing kills.

Wilson also writes a tight plot, which extends backwards through flashbacks that reveal Demane's training by his "Auntie" and the early stages of his relationship with Captain and propels events forwards as the caravan travels from the station at Mother of Waters into the Wildeeps. Where most authors of the epic sf/fantasy genre would bloat this kind of story up to 700 plus pages, Wilson follows a less is more precept. Also the book is often quite funny, whether in witty and ironic asides by Demane or in the humorous antics of some of the brothers.

And Wilson's writing is vivid, witty, lean, and poetic:

--Demane comes to himself "like a slapped sleepwalker."
--"Some butcher had not judged them different meats, for with intimate promiscuity cadaver of man and carcass of pig lay strewn together in every attitude and condition of death."
--"Careful. A toad, beetle small and searingly green as pond scum, crept on the path ahead. With the butt of his spear Demane gouged the dirt and slung the virid speck, mud engulfed, off the path where Captain's foot, half-naked in a sandal, would step a moment after his own."

Audiobook reader Kevin R. Free convincingly switches between African American and standard American accents and effectively modifies his voice for different character moods and types. Captain's vox seraphica is impossible for a mortal to read, but Free does it as well as anyone could.

I do wonder about the origin of the "gods," and wonder whether they are beings of advanced technology and genetic modification, or what. I do yearn for a strong female character or two (it's a guy's story). I think Wilson pushes the linguistic things too far by having one of the brothers speak with a French accent and patois. I also think the end of the climax is a little too unclear. But I really liked Sorcerer of the Wildeeps, and imagine anyone wanting a quick, fresh take on the epic sf-fantasy genre would enjoy it.

NOTE: I read two critical audible reviews and would say that the story makes more sense the longer you read it, but that if you don't like rich style in your fantasy, you won't like Wilson's--I find it a pleasure.

What is this story about?

Liked:
-Interesting and charming use of narrative voice and dialogue
-really unique and weird way of using magic: "milking third eye" and then spitting ichor from a forked tongue
-yay for gay and bisexual characters!

Disliked:
-This book is missing elements of a clear narrative structure. I never knew where it was going, what the goal was. It just meandered. This might have been helped if the characters' meeting had taken place in the beginning of the book instead of the end.
-The end was rushed. SPOILERS BELOW


The main character's lover dies. An annoying trope for gay romances, but even worse, the death is purposeless and not explored at all. It literally happens in the last minute of the 5 hour book. As far as I can tell, the main character's goal throughout the story was simply to be with his lover, follow him, maybe convince him to lead a more peaceful life. Well, the lover dies, which I suppose makes this book a tragedy, but there is absolutely no exploration of the death, resulting grief, and how the main character will refocus his life and move on. So as a love story it fails. As a tragedy it fails.

I would love to see this book rewritten with a more logical narrative structure. Set up the problem, work towards solving it, give us the character's darkest hour, then a glorious resolution. The cool setting and unique dialogue/narration combo deserve a better narrative structure.

Challenging but worthwhile and engaging novella

As someone who reads a lot of science fiction and fantasy, this was a fascinating and worthwhile experience. First, the Sorcerer of the Wildeeps is a good story - a tale of mercenaries and caravans, mostly occurring over a single night, with some wonderful SF/Fantasy elements. Second, it is an example of how some of the new, diverse voices in science fiction can broaden the genre is new ways. This tale is very influenced by both Africa and African-American contexts, as well as exploring some gay themes. This gives the story a distinct voice that, while still conventionally swashbuckling in a fantasy way, also feels fresh and different.

Interestingly, it is not the themes that make the story challenging, but rather than language and structure. Wilson alternates between Shakespearean flourishes and street slang, and between complex science fiction talk and gutter creole. Also, the story involves flashbacks and changes of scene that can feel abrupt. However, the reader Kevin Free, a trained actor and storyteller, makes it all work - with some of the best voice work I have heard recently.

If you are are interested in something difficult and exciting in science fiction/fantasy, this is a good choice. Expect to work a bit in following along, and you will be rewarded with a unique voice.

A beautiful story skillfully written, blending romantic prose and modern day vernacular seamlessly! The symbolism for the concerns and the beauty of the black community is deeply present and felt even more deeply. I love the story and was sad for it to end.

Not only is much if the dialogue crude but jargon and inflection propagate racial typing into the fantasy realm.

a truly unique and amazing story. there this is one of my favorite science fiction stories. there not spot of black sci-fi out there but this is one of the best.

I hated this book. I listened and re-listened to sections at times just to comprehend what was going on. Feels like, (we the listeners), are eavesdropping on a drug induced dream. A dream not even the the dreamer understands, and why should we?

The writing style is interesting, but I desperately wanted a plot. Even something simple, (like save the princess from a tower), would been preferred to this listing ship.

Some people might be put off on this medieval Boyz n the hood dialogue, I actually found that rather interesting. I wish Wilson would develop a proper story populated with these characters.

Interesting concepts but bogs down trying to sound overly sophisticated. The experience is like listening to an essay written by an English major trying to impress other English majors.

Seem to be more for gay or bisexual reading. storyline OK I was impressed thou.