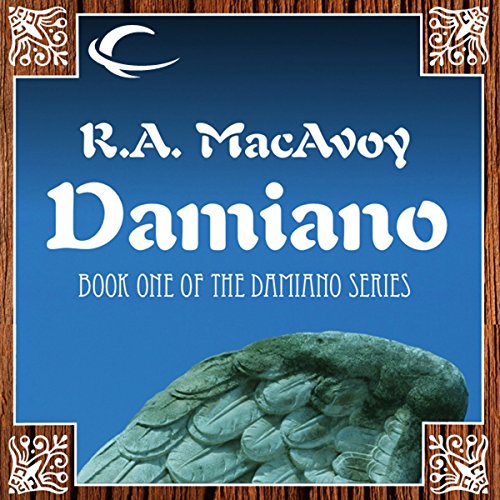 Set against the turbulent backdrop of the Italian Renaissance, this alternate history takes place in a world where real faith-based magic exists. Our hero is Damiano Dalstrego. He is a wizard's son, an alchemist and the heir to dark magics. But he is also an innocent, a young scholar and musician befriended by the Archangel Raphael, who instructs him in the lute.

To save his beloved city from war, Damiano leaves his cloistered life and sets out on a pilgrimage, seeking the aid of the powerful sorceress Saara as he must walk the narrow path between light and shadow, accompanied only by his talking dog. But his road is filled with betrayal, disillusionment, and death, and Damiano is forced to confront his dark heritage, unleashing the hellish force of his awesome powers to protect those he loves.

The further volumes of this tale are Damiano's Lute and Raphael.

"I am greatly impressed with Ms.MacAvoy's Damiano. Her style is masterly and her sorcerous duels hold one spellbound. You seldom find such telling evocation of striking witchcraft scenes, and the weaving of the whole tale is like viewing one five-hundred-year-old masterpiece just about to be cut finished from an artists's loom. I recommend it highly." (Andre Norton)
" Damiano is a treasurable read. Roberta MacAvoy is undeniably a writer to watch." (Anne McCaffrey)

What listeners say about Damiano

Young Damiano Delstrego is now the head of his house after his father, a witch, was killed when a spell went horribly wrong. Damiano is also a musician, an alchemist, and a witch, but he’s a good Christian, too, and he tries to use his powers only for good. That’s why he refused to help the army who came to take over his town, though they offered him riches. Instead, Damiano decides to follow the townsfolk who’ve fled for the hills. He wants to warn them that the army plans to find and plunder them. He’s particularly worried about Carla, the girl he has a crush on. He also wants to seek the aid of a powerful sorceress.

So, with an Italian medieval village behind him and the towering Alps ahead, Damiano sets off in the snow with his lute and his beloved talking dog, Macchiata. Along the way, Damiano has a few mishaps, witnesses brutal deeds done by Roman soldiers, gets some inspiration from the archangel Rafael, finds out some uncomfortable facts about his father, and is offered a deal by the devil. He also learns that there’s more to life than his dog, his lute, and Carla.

Damiano is the first volume of R.A. MacAvoy’s DAMIANO trilogy, a historical fantasy set in Renaissance Italy. MacAvoy’s prose is lovely and she makes the most of her setting, with allusions to real historical people, events, religious beliefs, literature, and art. The story takes place in winter and all the brutal events that Damiano witnesses seem especially vile when set against the whiteness of the winter alpine landscape.

I didn’t love the plot as much as I loved the writing and the setting, but this is more of a personal preference rather than any problem with the plot itself. Though it depicts some ugly events, Damiano, his talking dog, and the beautiful angel were a little too sweetly innocent for me. The main focus is Damiano’s struggle with his desire to use his powers for good and his discovery that sometimes it’s hard to know what’s right and wrong. He’s also worried about his soul because Satan has informed him that, since he’s a witch, he’s automatically damned. I didn’t find this to be riveting subject matter, but I thought the excellent writing made up for it.

Though the DAMIANO books were marketed to adults, I think this coming of age story will be appealing to teenagers, and it’s certainly written more beautifully than most YA fantasy is. It’s so lovely, in fact, that I plan to try the second book, Damiano’s Lute. This story has plenty of potential. I’m listening to Audible Frontiers’ version and am very pleased with Nicholas Tecosky’s narration.
Originally posted at FanLit. 3.5 stars.