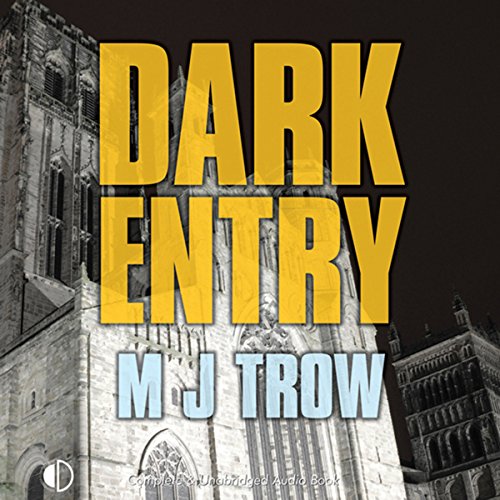 Cambridge, 1583. About to graduate from Corpus Christi, the young Christopher Marlowe spends his days studying Virgil and Aristotle, and his nights carousing with old friends. But when one of them, Ralph Whittingside, is discovered lying dead in his King’s College room, mouth open in a silent scream, Marlowe refuses to accept the official verdict of suicide.

Calling on the help of his mentor, Sir Roger Manwood, Justice of the Peace, and Dr John Dee, a man who knows more of poisons than anyone else, Marlowe sets out to prove that his boyhood friend was murdered. But, if Whittingside did not die by his own hand, who was responsible?

What listeners say about Dark Entry

I've always been found of Christopher Marlowe as a poet and play-write. As a character though-- M. J. Trow pulls him one way, then another, and tries too hard to rehabilitate him from the ancient canard that Marlowe indulged in the sin that was the sin of Sodom. I find that a bit disappointing because I think a little off kilter sexuality is attractive in a man (or a woman).

Anyway, Marlowe is just about to receive his degree at Cambridge when he and his friends are caught trying to sneak back into the college grounds after a night of roistering. Marlowe escapes but the others are caught and punished with beatings. This delays the ceremony while their stripes heal. Meanwhile, an old friend of Marlowe's youth is discovered in his room, dead. This friend who is called variously by the narrator Ralph and Rafe is one of three dead bodies that make an appearance in Cambridge that month.

Marlowe is called upon by his old mentor and protector to take on the task of discovering Ralph's killer.

While a bit disappointed in Marlowe and the other overlarge cast of characters, I did like the characterization of John Dee and would not have minded seeing more of him.

Andrew Wincott, the narrator, is pretty uninspired and does nothing to punch up the story. This book would have benefited from a younger voice with more of a period feel.

M. J. Trow is a prolific novelist whose books eventually all blend together. The explanation of the murder in this case was a bit of a groaner rather than an amazing piece of detective work.

I expected to like this. I wanted to like this. But most of the time I just drifted off. The plot, particularly the first hours, failed to interest me. The characters had no character, no personality. They seemed to be stick figures to be moved around as the author deemed necessary - not that I had interest in what happened to them. The narrator was a disaster as far as I was concerned. He both overdramatized and under dramatized the reading, but then, as I said, the writing had no spark. I just listened to David Colacci reading Donna Leon, and he invested each character with personality.
I do read a lot of historical mysteries, some set in Cambridge, and this book ranks near the bottom. I can’t believe that I could care so little about Marlowe (The Jew of Malta May be my favorite stage production), but I will not be listening/reading anything else by the author.