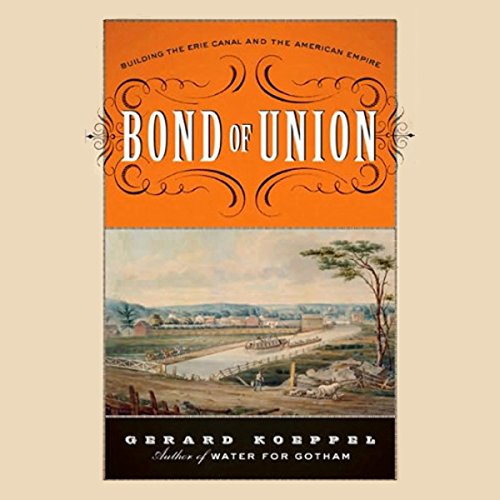 By: Gerard Koeppel
Narrated by: Dennis Stone
Try for £0.00

Conceived in the early 1800s and completed in 1825, the Erie Canal was the boldest and biggest American engineering project of its century, with enduring political, social, and economic effects. It was the Erie Canal that first opened up the West to American enterprise and imagination, bringing vast riches and a far-reaching vision to a rapidly expanding nation. In this compelling narrative, author Gerard Koeppel tells the complete, sweeping story of the creation of the canal, and of the memorable characters who turned a visionary plan into a successful venture.

Koeppels extensive research includes major new findings about the construction of the canal as well as its enormous impact. Bond of Union provides a unique perspective on Manifest Destiny and the beginning of Americas self-perception as an empire destined to expand to the Pacific.

What listeners say about Bond of Union

loved it and look forward to learn more on my next visit to New York.

Perhaps the Hardcopy would be better

The book as written by Gerard Koeppel is excellent. I am a history buff who has lived 2 score in upstate New York, and as a 10 year old kid I learned most of NY geography from navigation charts more than a few times going up and down the NYS Barge Canal System. Although may only be to those ears are used to the idiosyncratic pronunciations of the Algonquin, Iroquois, Dutch, and German vocabulary that form the bulk of the names in the New York Gazetteer, I really wish they had found a narrator indigenous to area, at the very least someone who knows how to properly pronounce the word "CANAL !" We use a hard "C" and either emphasize each syllable equally or the first stronger Can as in Can-ale, and not "Gun-nail" with a hard "G"