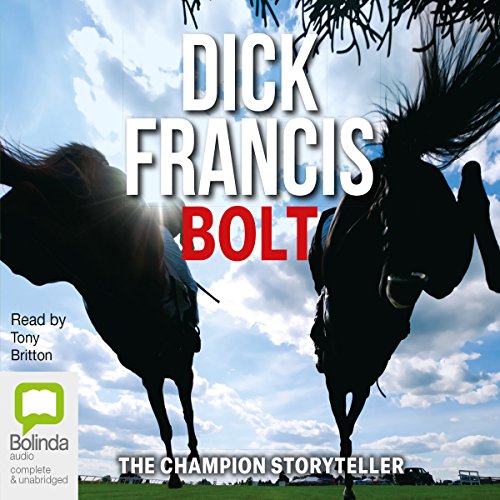 When Kit Fielding, champion steeplechase jockey, finds out that his chief patron, Princess Casilia, is facing an increasingly serious threat, he goes unhesitatingly to her aid. Neither realises that his instinctive support is the first step towards a frightening battle involving violent risk, with the honour of the princess's family as the prize and Kit's own destruction as the forfeit.

Beset by other problems, not least his troubled romance with Danielle, the princess's niece, Kit knows that while steering through a maze of deadly outside dangers and riding at breakneck speed in races, he must also contend with the long-term hatred of his own family's enemy. Many of the characters from Break In reappear in this superbly told story.

"The plot races along wonderfully well, right up to a jolting twist at the end." (Publishers Weekly)
"Tony Britton, with his rich English accent, does a magnificent job of rendering an international cast of characters." (AudioFile)

"A novel that races along with all the alacrity of one of Kit's mounts at the Devon or Ascot race courses. A subtle twist at the end makes the jaunt all the more enjoyable." ( The New York Times Book Review)
"One of the finest writers of his genre." ( Good Housekeeping)

Mr Francis at his interesting best Sad when it finished On to another one. Which one to choose next?

it has love, horses, suspense, and mystery and a real good story.. dick Francis best

Dick Francis is a classic. As usual he has produced a fun and well thought out thriller, Bolt is a particularly good one with two villains and the return of the capable jockey-come-hero Kit Fielding. Tony Brittain has to be one of the most engaging narrators in history...

What made the experience of listening to Bolt the most enjoyable?

the world of jumps racing and underhanded people involved

the balcony scene can,t say to much about the plot it would be unfair to readers

yes it was good