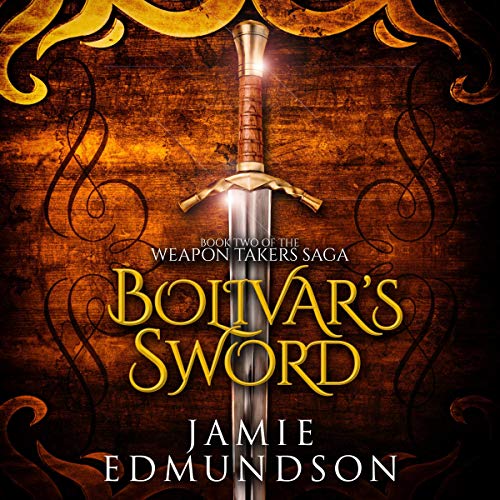 Bolivar's Sword is the fabled weapon of the greatest hero of the Krykker race - and Rabigar needs it. There's just one problem. Rabigar has been exiled from his homeland, never to return, on pain of death.

Belwynn has escaped from the clutches of Ishari. But her brother Soren, and her friends, have not been so lucky. Who will help her in a rescue attempt that seems certain to fail?

Meanwhile, the armies of Ishari are on the march, aiming to smash the resistance of the Brasingian Empire. Will the fragile coalition hold? Or will the dark forces that have been unleashed destroy their world? As war comes to Dalriya, the stakes couldn't get any higher...

Bolivar's Sword continues the action-packed series, The Weapon Takers Saga. If you like multiple character storylines, set in a rich and detailed world, you'll find this epic fantasy tale hard to put down.

What listeners say about Bolivar's Sword

I enjoyed the first book and this one was a great follow up, I'm excited to read three and four. Love dual narrator books. Recommended!

Keeps you coming back for more!

Tons of intrigue, action and magic! A great story and definitely as good as the first! A little darker than the first perhaps, but that suits my tastes well so I have nothing bad to say about this book... except that it ended! Lol. Luckily for me, I have book 3 lined up and ready to go! Greg and Bridget do another great job with narration and character voices! Really impressed with the dual narration! This is my honest opinion of a free review copy.

Bolivar's Sword takes an epic turn in this second book of The Weapon Takers Saga. With huge pitched battles, many POVs and important characters that are scattered throughout the land, and numerous high stakes situations, the scope of this book becomes even more massive than before. Jamie Edmundson has a knack for world building and characterization, this book serves to add more detail to an already vivid setting. The largest improvement in this book, however, is that it has a far more satisfying conclusion and story arc. Finally, while this could be argued as one of the books strengths, it was also by far the biggest frustration for me while listening to the audiobook. It took me the better part of the book to figure out who was who, particularly as it has been some time since I read the first installment. I am not sure if a character guide is included with the hard copy but it would be great if it was added as a PDF to the audiobook. Bolivar's Sword remains a creative and complex fantasy story that may take a second read to truly appreciate. I received this book free, in exchange for an honest review. Morality rating- There is violence , death, murder, homosexuality, slavery, sex, and sexuality.

This book and boy it did not disappoint! Can not wait to start book 3!

Stopped Listening to Write this Review!

I wanted to jump right into book 3, but I know me and realize I must complete the review on one before I move to the next. The story is entrancing, I have vested interest in these characters and losing one hurts. The narrators Greg and Bridget, give life to words as I listen to the battles unfold and the minds of those within it. I was gifted this book but would have gladly paid for it. The read is well worth the credit and if my thoughts mean anything, I recommend this series to anyone who likes a good story, a great adventure and some really awesome voices. Thank you for the honor Jamie Edmundson! Now off to read book 3!

Bolivar's Sword is the epic continuation of the Weapon's Takers saga. It has huge battles with high stakes told trough multiple POVs. The characterization is phenomenal and the setting and plot well developed. All told is the kind of fantasy book I like; complex and of epic scope!

I greatly enjoyed this second book of The Weapon Takers Saga. The first book, Torics Dagger, provided an introduction to a some of the many characters, concepts and societies in the saga which Bolivars Sword expertly expanded, reinforced and continued on and proving to be a truly awesome story. This tale has breadth and depth is creative, vivid and lively. Jamie Edmundson is a one skilled writer. Narration was excellent.  I received a free copy of this book and am voluntary leaving a review

Adventure, magic, friendships, epic quests, heroic deeds, battling evil...great stuff. No slow spots in these books so far. An excellent series. Warning, these books may be addictive. I was given a free review copy of the audio version of this book in exchange for an honest review.

Can not wait for the next book. Great story, characters & performance. Story line drags you in

the second book in the series continues and interesting adventure that I can't wait to see how ends up.

Great continuation of the story!

I was given this free review copy audio book at my request and have voluntarily left this review. Like with the first book, there is a lot going on. Lots of big battles, a lot going on to drive the story forward... it was quite exciting and very engaging. I thought the narration continues to be great. I will definitely be up for book 3.

I enjoyed this book very much! I can't wait to read what will happen to everyone in the next book. It's full of excitement! I love the relationships these characters have in their thrown together group. They have become a family. I'm so glad some of them made it out. I dont want to spoil anything! I am ready for the next book ! I need to know what happens to the rest of the prisoners and the brothers.