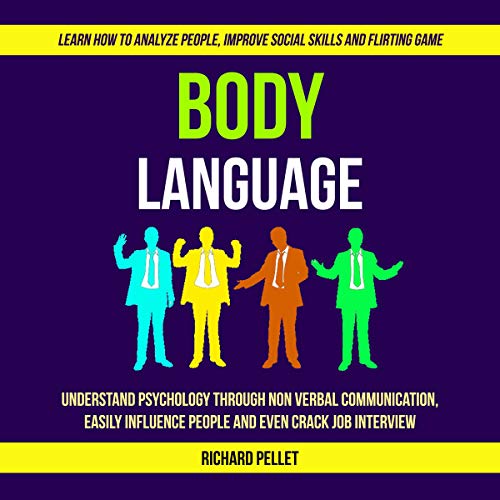 By: Richard Pellet
Narrated by: Michael Reece
Try for £0.00

Imagine knowing how to decode the secret messages of the human mind...having the power to influence and persuade people to your business advantage...what would that be worth to you?

Wouldn't it be nice to know what people were really thinking? Imagine how helpful it would be to have a human lie detection tool in your hands! Well, now you do - this body language book!

Since ancient times, we have used our body language to communicate, conveying our emotions and thoughts to those around us. Each person out there has a different body language, encompassing not only facial expressions but also body postures and gestures. Even eye movement is considered as part of the non-verbal communication, being closely followed by touch and using one’s personal space.

There is really no way around it: The most successful, influential individuals are masters not only of the spoken word but of body language. They use nonverbal skills of their own - but also a bang-on interpretation of yours - to get things done by persuading you to seek them out, hear them out, do things for or with them and buy their gizmos. They are influential because they give you what you need in the way your own body language says you need it. They get along with most everyone since they read you correctly and adapt to you (rather than demanding the reverse).

Most people use expressions through their physical behaviors that send out flags as to what they are truly thinking and feeling. When you learn to recognize these clues, cues and flags, you’ll be that much closer to getting the full picture of what he or she is really communicating.

There are so many great tips in here on how to steer conversations with people and how to recognize exactly what is going on. Very interesting read and very easy to apply to your daily life. I highly recommend this book and practice what is said.It was very easy to read. With this book you will learn the basics to start I would definitely recommend this book to anyone! The truth is, I am very happy that I have purchased this book.

I really liked this book. it gave me a good insight into people and their body language. it took me a few chapters to get used to the narrator. He sounded a bit robotic. but the book itself.. Great.

I purchased this book as I wondered if "Body Language" would be a useful tool in my day to day business, it has surpassed my expectations ten fold! Once you've read this you will have the upper hand in both business and personal interactions. You will be able to hear the "unspoken language" and read between the lines of what your ears are actually hearing. . I love how this book explains the rationale as to why people act in certain way in certain situations. I gained so much understanding from this book! best book ever for body language. i love this book. and much help me for my body!!!!!!!!!!

This is a very good book for body language.

I have found this book inspiring, and leads the reader to wonder more on the subject. The book is great for writers, and beginners of this type of work. A good introduction to the study of body language. This book has helped me identify when a friend or customer is feeling nervous, or hiding something. It also helps me better understand the subtle messages my partner is sending me through body language. As a result our communication feels more natural and seamless. good book for body language.

A way for book-smart people to understand.

Body language. Eyes, hands, legs, face, everything is covered here. How to propose for dates, how to handle dates, booom! all good stuff, i don't think i have ever been on a date since i got married (besides my wife). I really wasn't expecting dating content inside here. This book was able to provided a lot of information and awareness about how body language works. Body language is also communication without the words. I love how this book explained some of the common body language and how it affects people seeing this body language.

Fast takes this unknown language and reveals to the common man that, indeed understanding body language is crucial to understanding the human being. What a great romance! Best friends for years realize what they are looking for is right under their nose. Some reviewers didn't like they were these great friends but were reluctant to reveal their true feelings...weren't communicating. I have found this book inspiring, and leads the reader to wonder more on the subject.

Thorough explanation they gave in this book of so many gestures, movements and expressions of people in everyday situations. Body language is so important in understanding others. This book is helpful for me since I am in sales and from the knowledge of this book I was able to know what my clients love or dislike. Impressive! . These personality types are what famous motivational speakers and entrepreneurs are made of. Imagine someone who can take risks socially and physically while maintaining an open circle of friends.

One of the best books I’ve read.

it covered all aspects of body language and each meaning. helped developed body language and dynamics enabling one yo go out and apply the knowledge. Great examples on how to read peoples body language. For instance how do you eat dinner? do you eat one item at a time and then go to the next. Do you eat a little bit of everyting. Do you mix the food up? You can tell alot about some one on how they eat. That is why some executives take their clients out to eat.

I love this book, from the way it's written, to the pictures included, to all the information it provides. This is the first I have read in body language and I loved it. It was filled with great insight on how the body responds to our outside environment and innermost feelings. I have recommended this book to my students and have bought extra copies to give as gifts. , I like hearing first hand accounts of real life situations where the particular body movement was prevalent. I learn best that way!

Awesome read! I think it teaches you very valuable information in order to protect yourself in many situations. It's the most simplest things that we don't think of to watch out for that we need to know! Very interesting

The creator doesn't squander any words and gives straight substance with no lighten throughout.An incredible manual for human non-verbal communication and interpreting what others are thinking dependent on their posture,position and signals. .

There's a fine line between confident body language and "negative" body language (aggressive, having the opposite of intended effect), and this book gives helpful insights to both sides as well as practice exercises designed to improve interpretation of body language. In short, body language is an additional channel of communication that we overlook at our own peril.

This is a wonderful resource. Find the right move and the perfect way to describe it. Love this book! Outstanding reference for rookie writers trying to grasp the intricacies of excellent writing techniques. The author clearly provides several applicable examples to enhance her premises

Importance of body language and how to utilize it.

This book does an excellent job of telling you both how to improve your body language to achieve certain goals such as influencing people, but it also tells you valuable tips about how to decipher others' body language in order to debunk their communication beyond their words.

Nice resource for a writer

Very interesting book. I really had fun finding out the meaning of gestures I never thought had actually a meaning. The list of body language signs is huge. My favorite chapter is the handshakes body language. From now on, I'll pay more attention to body-language of other people.

This should be the first book you read if you are interested in body language. I would recommend you also get it on Audible and you can hear the Tanya listen it to you.

A way to get ahead of the female

This is a well ordered manual for the apprentices. In this book you will discover such a significant number of accommodating data about recognize individuals to see there body language.

This is a good, interesting, one book that you can read a few pages on and apply immediately to get a better idea of the people around you.

Good book, a little more detail would be nice.

Being equipped with this inside knowledge provided by an Ex CIA Agent can prove to have a profound and positive impact in your everyday life. Smith details this topic with writing that is both entertaining and educational. From understanding the basics of non-verbal communication to understanding the signals from the face, eyes, arms, hands, and the entire body

Beyond useful in all walks of life. The only warning I have for people, beware the literal power this book possesses. If you listen it a section at a time and then look for that item, you will start to see how much people actually lie in general conversation.