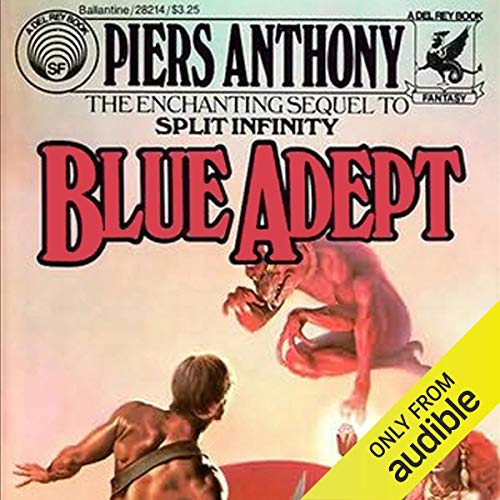 By: Piers Anthony
Narrated by: Traber Burns
Try for £0.00

In Book 2 of the epic adventure that began in Split Infinity, Stile discovers life on Proton and Phaze is getting more difficult. On Proton he's a serf trying to prove his right to exist by competing in the Great Games. And on Phaze, where only magic worked, he was the Blue Adept trying to master the powers of sorcery. On both worlds, someone was trying to assassinate him. And as if that weren't enough, he has to win the love of Lady Blue, fight a dragon, discover the ultimate weapon, and of course, seek out the all-powerful Citizen who was trying to kill him!

What listeners say about Blue Adept

This book was awesome. Everything in it and such a good cliffhanger for stile to deal with.

Not as good as the first book, but still not bad.

Would you consider the audio edition of Blue Adept to be better than the print version?

Yes, the narrarator does a good job and improves on what was written with his voice acting.

The characters need more development. Piers Anthony books read more like a transcript of a D&D game that a novel. All he does is present a scenario and show how the character uses his skills to solve it. The characters are all very one dimensional, if he developed characters more the story would be better. That being said the author is very good at what he does. He makes a ton of money and doesn't have much motivation to change.

Have you listened to any of Traber Burns’s other performances before? How does this one compare?

Yes, the narrarator does a good job as always.

The story is much weaker than the first novel, but this one is still worth a listen, especially if you are like me and are re-living books you loved as a child. Be warned the writing quality of the series is bad after this one. I would not advise going beyond the third book. The series reaches a satisfying close and all the books beyond that are not good at all. they seem like the author was just churning anything out with the series name for a buck.

Piers Anthony has a masterpiece in this story. The story switches between 2 worlds with different cultures, purposes, and plots, that Anthony keeps integrated and interrelated around his main character, Stile.

The action is continuous. The characters are fun. Their problems are interesring, the solutions unique and ingenious.

Traber Burns is an excellent narrater. His performance creates an immersive experience. The book comes alive.

love it. nice story to take your mind off the crazy world at this time.

Good right until the end.
But ... Why end it like that.
Still a good read, or listen...

blast from the past

Mr, Anthony does a wonderful job creating characters, and worlds all the while telling an entertaining story. highly recommended for pure escapism from a sometimes all to real world. Kudos to the author!!

I've always loved this series and the narrator is perfect. a match made in Phaze/Proton heaven!

now, as an adult, it is too remedial in every way. we were bored and disliked the main character.

I read the series as it was printed thought why not listen to it the audio version of it made it new and interesting . the series was excellent kept my rapt attention, and had me downloading the Nextbook long before I was finished with the first

I read these many moons ago, and it was nice to go through them again in audio version.