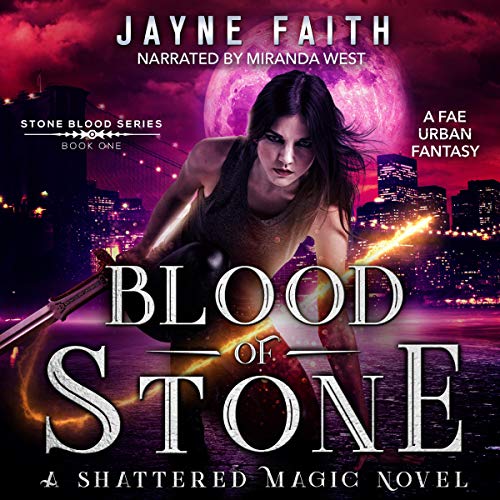 By: Jayne Faith
Narrated by: Miranda West
Try for £0.00

Hunting down the rogue vampire who killed her mother is Petra Maguire's sole mission in life, despite her father’s urging to serve her people back home in Faerie. But when Petra discovers she has a changeling twin who’s been kidnapped, she can’t avoid Faerie affairs any longer. Plunging back into a world of magic, royalty, and power plays, her daring rescue of her sister pushes inter-kingdom hostilities to a tipping point. And suddenly, Petra is up to her eyeballs in Fae politics.

Tensions erupt into a threat of all-out war, and the only way to settle matters is for Petra to enter a battle of champions - a fight to the death.

Download Blood of Stone now and instantly lose yourself in a world of magic, action, and intrigue!

What listeners say about Blood of Stone

This was a such an interesting start to the series the characters were very entertaining and the premise of the book was very unique.

The narrator was a little monotone in their voice but I was still able to differentiate between the characters.

Blood is thicker than water

I enjoyed this book. It was a different genre for me but with all the action it kept me listening until the end and I might even look into getting book two, as it obviously follows on from this book and I want to see what happens. There was a number of unanswered question left hanging which I guess will get answered as the series unfolds but other than that I enjoy the plot. The characters were like able and I like that the main character is more than capable of looking after herself. She isn't a pretty princess quaking inside.
Petra is avenging her mother's death by taking down vampires, one vampire at a time. She knows it won't bring her mother back but it helps her to feel like she is doing her bit. Which is why she is annoyed when she has to return back to the Fae world. It seems she has a twin sister who has been kidnapped. Petra has always been a fighter but in this mission she must don a dress and mix with royalty. Will this be her toughest assignment yet? Battling the politics between two races or will she be the first one to draw blood and save the sister she didn't know she had.
I thought the narrator was good but she didn't change her voice much between talking and voices for the characters. It was still easy to follow and the hours flew by quickly.

The story is OK and has some cool ideas but I really struggled with the book because of the narrator who has a very robotic reading style (sorry narrator) that really impacted my enjoyment of the book. There's a point in the book where someone's voice is described as monotone and I found myself perking up in anticipation to see if a deliberate attempt at monotone would be noticeable. It mostly wasn't.

This is a fantastic audio book. I loved it. Amazing characters and great storyline. I highly recommend this audio book.
The narrator is pretty good too.
❤️😍🤪😂

Half Gargoyle and Half ???

This story is about a Girl who is half Gargoyle and not sure what her other half is. She knows her mother died vis a Vampire, but does not know anything else about her mother's death. Throughout this book the reader/ listener waits to get clues or answers about the MC's past, but nothing is foreth coming. Might be a good Series, but unsure.

one I'd my favorite series. The world building is fantastic with likeable characters that are easy to invest in. I highly recommend this series. it's a great listen the narrator dies a fantastic job bringing the story to life.

this was a good book to listen to. the narrator was a little fast in reading, but over all a good story.

Two plots running together, a lot of non stop action to enjoy. Threats of who would get the kingdom to rule. Fighting for death if need be
Given ARC audio of which narration was good for my honest opinion and my voluntary review