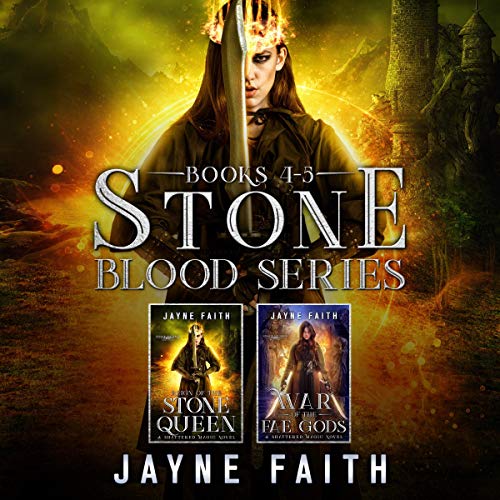 This audiobook is a collection that includes books four and five in the best-selling Stone Blood Series by Jayne Faith.

She must rule a kingdom that is against her...

Petra Maguire wants to fight for her people, not rule them. But by Oberon's decree, she is now queen of the new Carraig Sidhe kingdom. Problem is, many of her subjects would rather see her dead than on the throne.

As Petra struggles to unite her people, she must also join Jasper's quest to kill Finvarra before he can usher in a winter of Unseelie rule in Faerie.

Torn between responsibilities, Petra will have to find a way to embrace her new role as royalty, while still staying true to her warrior roots. And overshadowing everything is the imminent threat of the angry gods' return.

The Seelie hold on Faerie is slipping, and wrathful gods are closing in...

Petra Maguire, newly crowned queen of the Carraig Sidhe, wishes she could focus on her own fledgling kingdom, but Faerie is facing threats unlike any seen in generations. If the Seelie are to have any hope of victory, she must unravel the mystery of the ancient power running through her veins.

Can Petra harness the magic of the gods before her blood father Periclase takes the Summerlands and an eternal winter to destroy the homeland she loves?