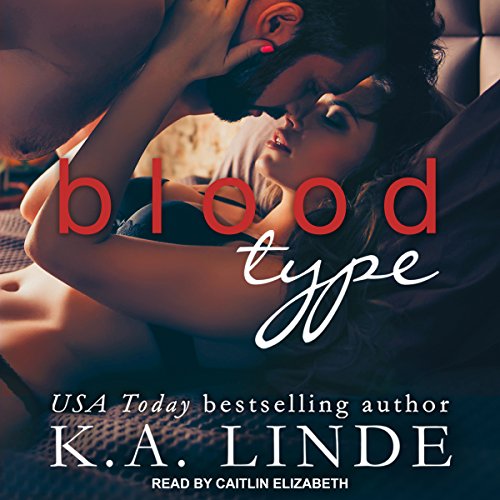 For Reyna Carpenter, giving up her body isn't a choice. It's survival. In a civilization laid to waste by poverty and desperation, Reyna accepts a high-paying position with the wealthy and hungry vampire elite. Her new job is as the live-in blood escort for the intimidating, demanding, and devilishly handsome Beckham Anderson. He's everything she expected from a vampire, except for one thing - he won't feed off her.

Reyna soon discovers that behind Beckham's brooding, wicked façade lies a unique and complex man. And that in a dark and divided world, she is more valuable than she ever would have believed.

For with each passing night, Reyna can't shake the sensation that it's Beckham who's afraid of her.

What listeners say about Blood Type

Could not put the book down. I got really involved with the story and characters. At the end I looked for book 2. Blood mated. Can't wait for the next book.

I have been a fan of K.A. Linde for about 2 years now and she never seizes to amaze me. To me, this story is a combination of True Blood meets Hunger Games. The background in the world that they live in is very real and the sense of urgency is very palpable. Once you get deeper into the characters and all the drama it is impossible to press stop. Reyna, for her young age, has much maturity and a level head on her shoulders so one can't help but root for her and want to keep following her journey. Beckham is all the bruddy, mysterious and alpha male that we love to hate and devour all at once. There are times where you are on the edge of your seat and you think the action will lead you to one place, but all of a sudden "BAM!!" The unexpected happens and you are again taken on another ride. The ending though... JUST WOW!!!! The follow up can't come fast enough!!!

I try to find the positives in a book...here’s what I felt was a plus here. The story line was interesting...It wasn’t the typical Vampire story. This broke all the stereotypes of sunlight, stakes etc. In this world the economy has crashed and Vampires who are known to be real by everyone are now out in the open mainstream and one of the biggest employers in the city. If you are willing to become a blood escort. This is a job in which you agree to feed your sponsor vampire your blood, a type that is specially matched to that vampire and in return you are well compensated. Problem? Well vampires are very political as well as predatory so their world can become pretty scary to say the least. But when faced no jobs, no education, no income and with starvation you reconsider what you will and won’t do to make a living.

Now here’s my cons...this was and is an interesting idea for a story. I even liked the characters to a point. There are a few truly scary evil bad guys, a gorgeous broody hero and one incredibly annoying heroine. Yeah she’s what screwed up the entire story for me. I thought at first this girls just plucky...she’s curious and let’s be honest questioning certain situations seems reasonable. But that’s just the thing....she doesn’t ask enough important relevant questions when she signs on the dotted line to join this service and then once she’s in a world she doesn’t understand the rules to she won’t shut up. She continues to ask stupid questions when she’s been advised to remain silent. She knows that some of these “people” are dangerous and deadly and yet she continues to open her mouth asking questions and inserting herself into situations that put her in danger. I read this book all the way through...but by the end I wanted to tell the girl please just shut up and follow instructions.

The narrator did great job with the voices and the overall story idea was a good one. But the female character had no sense of self preservation or the reality of her situation. Which made the story frustrating to listen to. Will I read the next one? Honestly not sure at this point.

AWESOME.. BUT BEWARE - THE FIRST BITE OF A TRILOGY

I’m a huge fan of K.A. Linde and I’ve been tempted by a hot vampire or two.. so add them together and it becomes a must have listen. But wow this was far more than I was expecting.. the world-building was phenomenal, the chemistry sizzled and the unexpected lay behind ever corner.

One city.. but two worlds.. the lavish colorful decadent world of the vampires and the gray grungy world of the humans. Reyna lived in the Warehouse District with her two brothers but, with no money, no prospects and no future, her only hope was to become a live-in blood escort for the privileged vampires. But that plan went catastrophically right and catastrophically wrong when she got assigned to Beckham Anderson because Reyna saw, experienced and did things that were way.. waaay beyond her expectations. And that was due to the dark, sexy, charismatic, broody, moody vampire that she belonged to.

By chapter six I thought I’d look for more info about this book.. only to discover that it was going to end in a CLIFFHANGER and it’s book 1 of a TRILOGY. Now I love trilogies but don’t do them until ALL three books are available. However, this book’s storyline grabbed me and totally pulled me in as I eagerly anticipated the next gaspworthy twist and turn. I just couldn’t let it go.. even knowing about the cliffhanger and the months of waiting for the rest of the books. Why? well, apart from having absolutely no self control, it was because it’s that damn good.. rivetingly epically good. Every time Reyna would leave Beckham’s penthouse you just didn’t know where the days (and the nights) would take her, what drama she’d get caught up in and what horror she’d see. There was also a delicious slow burn and sensual tension between Reyna and Beckham because their push/pull relationship was fuelling seismic attraction and lust.. but there’s so much standing in their way.

Worth a credit? Oh boy YES indeedie. A refreshingly new multi-layered vampire love story told from Reyna’s POV.. a gripping story of a world that’s been overtaken and ruled by vampires.. there’s secrets, mysteries, talk of a rebellion, innocent pawns and devious players.. and two people who try to resist each other. Great narration too.

I'm sorry to have used my credit on this book at all. How can a write be so careless as to bring to life such horrific personality?. That girl is not only stupid, but she does not know when to shut the fuck up, also she does not pick up on cues. And forever asking dumb questions at the absolutely wrong time.

What a whiny and annoying protagonist. I liked the concept of the story. Caught my attention in the beginning but then just went downhill. I couldnt get over how much I disliked raina. I get it, ask question that's normal but know when to SHUT UP. Crying and begging for a guy and when you finally get him you cry more and run away. I wanted to throw my phone so many time bc I was so annoyed. Only positive thing about the story is Beckham.

This book had so much potential but the dramatics were like a soap opera straight out of a teenagers diary.
I mean come on with the cheesiness...
The performance was even worse! Like watching a b budget movie except you’re only listening. Horrible acting!

The way this book was written is a bit off, written in the third person but describing everything and stating the main characters thoughts like it’s in the first person. What I don’t enjoy is the repetition of the phrase “she couldn’t believe......” probably in there a few hundred times. The story was alright but it was overly dramatic. Not for everyone

4.5 Stars not a flat 4 Stars SO I was missing the actual connection/chemistry between Beckham and Reyna throughout most of the book. Reyna was a bit whinny even though she volunteered for service. And Beckham was pretty much a douche for most of the story. With all that being said I still NEED to get my hands on the next book!! I need to know what happens and why things are happening!!

This specific video review will be included in the April 2018 wrap-up.