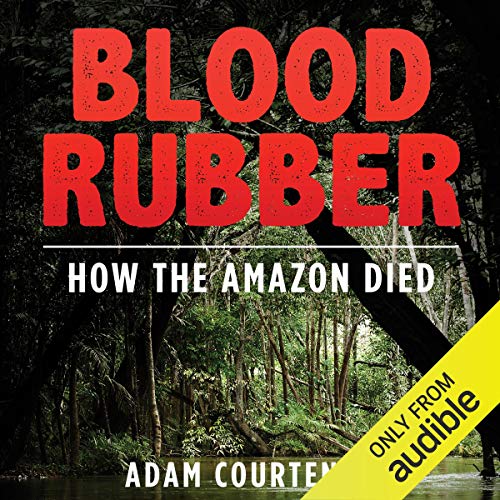 By: Adam Courtenay
Narrated by: Richard I Moss
Try for £0.00

Blood Rubber: How the Amazon Died tells the extraordinary story of one of the blackest episodes in Amazonian history, known as the Putumayo Affair.

In 1907 Walter Hardenburg, a young American explorer and engineer, was canoeing slowly down a meandering tributary of the great river, in deepest Amazonia, in search of adventure. The realm of Captain Kurtz’s Apocalypse Now seems tame by comparison with what he found through the mist up ahead. Hardenburg had entered the rubber domain of Julio César Arana, a rubber fiefdom gone mad - where the only law that counted was the ‘Winchester constitution’: the rifle made all the rules.

The native people were routinely enslaved to work the rubber plantations and flogged, raped and tortured to death if they resisted. Something snapped inside the young, idealistic Hardenburg when he witnessed these scenes of horror: thousands of native people were being slaughtered to satisfy the West’s insatiable demand for rubber. The rubber extraction methods that produced car tires, rubber hoses and countless other products relied on an entrenched system of utter barbarism.

Hardenburg vowed to seek justice for the thousands of victims of the Putumayo atrocities and to publicize the destruction of their lives and culture across the world. This is the story of how he did it. Blood Rubber is about the power of one versus the power of the machine...of utter evil versus improbable goodness.

Adam Courtenay is an Australian adventurer and writer who canoed up the Amazon as part of his research for this book. He has trekked some of the world’s most enthralling and difficult trails: retraced Hannibal’s footsteps over the Alps; slogged over the Kokoda Trail in New Guinea; and walked the Aboriginal Larapinta ‘Dreamtime’ in the central Australian desert.

His interest in Amazonian history goes back five years - he has explored the Amazon twice and written one ebook, Grand Mistresses of the Amazon. He is currently writing a larger nonfiction work on the entire history of the Amazon basin, which he plans to publish soon as Amazon Men.

What listeners say about Blood Rubber

But I realized it's length perfectly suited the story being told. The narrator was very, very well matched to the story line. An important story well told.