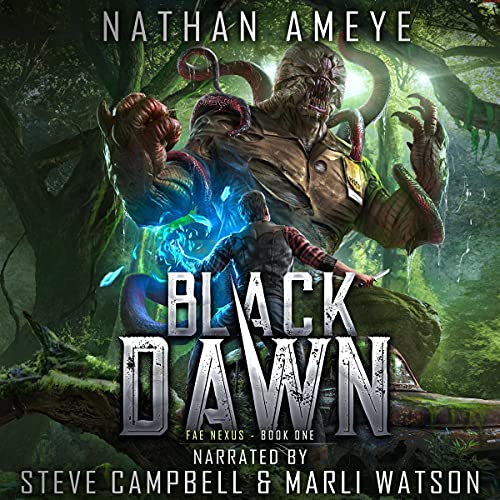 By: Nathan Ameye
Narrated by: Steve Campbell,Marli Watson
Try for £0.00

Gage came home to the Ozarks to mend fences with the friends he’d left behind. But when a solar storm reconnects Earth to the Fae Nexus, the world is engulfed in magical energy, altering the laws of nature...violently. Fuel, ammunition, and electronics explode, leaving the world in a dark apocalypse.

As the flames die down, demons emerge through the Fae Nexus, swarming Gage’s hometown and enslaving the survivors.

To fight back, Gage and his reunited friends harness Fae powers, becoming the Wizard, Ranger, and Fighter they’ve always played in their favorite roleplaying game.

With the help of a pair of moonshiners turned Alchemists and the ghost of a long-dead gunslinger, Gage and his friends have to level up fast to free their families and defend their home against the demonic horde.

He may have walked away once, but this time the only thing Gage is leaving behind are his regrets and a pile of dead demons.

What listeners say about Black Dawn

Oh god such a boring read

This will take you through every roll of dice type of play. I love LitRPG but this is one is sooooooo boring. Waste of money, really tried to like it but alas.

I need next book soon

Before I die.. I keep forgetting to finish books I like. Thus I am writing this review to let me know that I need to listen to the next in the series... That's how much I enjoyed this book. What other review can I give?,, I think this is more than any other glowing review I could give.

I dont see why you have to try reinvent the cultivation vulcabulary. I see no point to call mana or essence fae. If you want to be original atleast make up a word or chose one that fits. Fae is a race of beings already. Other than that the story was good and the narration was great.

I really enjoyed this book! I loved how the author set the story up. I thought the way he got the characters "into the game" was pretty clever. This one kept me engaged all throughout. Also, I thought the dice rolls were pretty cool!

As always, Steve Campbell was perfection with his narration. It's my first time listening to Marli Watson and I was impressed. She's fantastic. The duet narration was good. It was seamless.

I can't wait to read/listen to book 2.

a slow building litrpg with mechanics similar to AD&D.
there is also slight base building mechanisms but they don't take up much space so far.
The story is simply so far, but very well written.
the trio is different enough to make for great story telling.
the world building doesn't pick up till later in the book, but it looks to be quite interesting.
I'm very much looking forward to book 2

this is one of the best duets I've heard ever, there are no overly long breaks between shifts of narration, it simply flows natural...
Steve and Marli has a great chemistry and their voices compliment each other very well.
all in all they elevates this story to another level

Great LitRPG that starts in the forest, near a small hometown, and avoids the old "sucked into video" game trope. Crunchy number rolling for those of us who like the math! Told from a main character's viewpoint, but feels more like reading from a party perspective. For people like me, who grew up playing tabletop RPG, while camping, super fun story to read! Only book one, but can already tell diverse character building, including women not all having the same personalities and men not all being tanks. Looking forward to continuing the series!

I loved everything about this book. Great crafting, characters and magic system, especially the process of developing new spells.

The dice rolls for abilities and attack/defense really make this feel like a tabletop campaign, and for me added to the overall story.

One and I’m done!

This falls into the category of divine intervention saving the MC half the time. Not to mention the very lame system and background for this apocalypse system. The constant dice roll description was very annoying to the extreme. This constantly made it difficult to get into the story.

I've read apocalypse RPGs before but this one had something special about it. From the depths of the characters to the detailed magic/fighting system this is a read that won't disappoint. I'm looking forward to the next book and hopefully several after!

I loved the way this story starts out in current times and on earth. I also enjoyed the overall end of the world invading forces storyline. What I didn’t like was the amount of stats that was continuously updating. It seemed there was more character building than story. I understand the reason but I couldn’t keep track & for me it was a bit much.
The narration was fantastic. I’m a huge fan of Steve Campbell but this was my first book with Marli Watson and I thought she did a wonderful job.
This is book 1 and is a continuing story.

Really enjoyed this book can't wait for the next

there were some suspenseful moments and other times I was frustrated with the characters but it kept me interested the whole time. I wish the next book was out already.

I enjoyed the story, post apocalyptic system but heavily influenced by DnD, likeable characters, the villain of book 1 was just meh i don't even remember his name only his profession and last they had to roll for everything and i mean everything and i was mostly okay with that