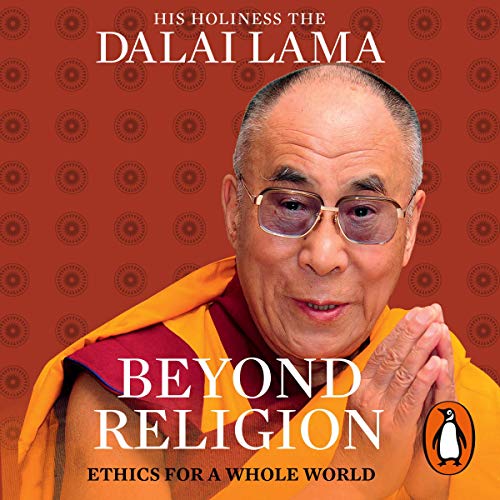 By: His Holiness the Dalai Lama
Narrated by: Thandie Newton
Try for £0.00

In 1999 His Holiness The Dalai Lama published the best-selling Ancient Wisdom: Modern World, which addressed the question of ethics for the new millennium. A decade later, His Holiness enters the contemporary debate about religion vs atheism and returns to the theme of ethics with a major new work: Beyond Religion: ethics for a whole world.

In this thought-provoking new book, he argues that religion is not a necessity for pursuing a spiritual life. Rather, focusing on tolerance and understanding between religions, as well as tolerance and understanding between believers (of any faith) and non-believers is the way forward. The way to achieve such an approach, he proposes, is through a system of secular ethics grounded in a deep appreciation of our common humanity.

Aimed particularly at the general listener, Beyond Religion is a modern-day polemic which outlines those ethics he believes should be central to our lives.

Thandie Newton has starred in Hollywood blockbusters such as Mission: Impossible II opposite Tom Cruise, The Pursuit of Happiness opposite Will Smith, and in Guy Ritchie’s RocknRolla. She won critical acclaim for her role in Crash, for which she won a BAFTA Award for Best Actress in a Supporting Role, and she has also had a regular role in the television series ER.

What listeners say about Beyond Religion

The narrator’s voice and style seriously undermines the book: it sends me to cringe at the hearing of it!

if you want to know what the world really needs

if you want to know what the world really needs to survive itself then this is the book for you.
you can truly feel the massive amount of thought care and compassion that his holiness the dalai Lama has as for the human race and all religions

Best Guidebook on how to live your life in harmony with people of all faiths, backgrounds, races, non believers and with nature in a sustainable way.
It will also help you in tackling with negative emotions in a healthy way by adopting the antidotes you will learn from this book.
Very helpful for people of all ages, from young teenagers to old people. Following this book as your guidebook can keep depression and mental illnesses at bay.

This book let me connect (again) with myself and some of the beliefs i had lost or missed. Awesome content and narration.

This is a very insightful read about the meaning of religion and understanding mental beliefs..