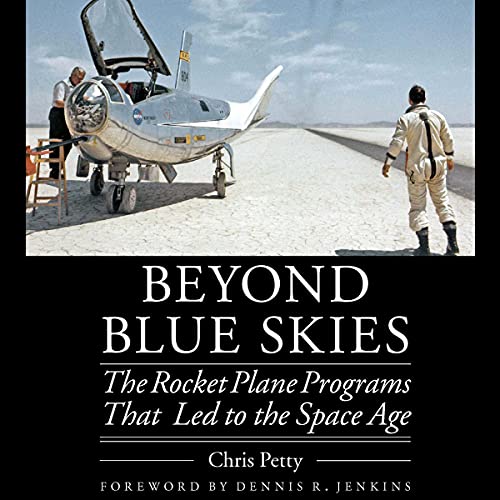 In 1945, some experts still considered the so-called sound barrier an impenetrable wall, while winged rocket planes remained largely relegated to science fiction. But soon a series of unique rocket-powered research aircraft and the dedicated individuals who built, maintained, and flew them began to push the boundaries of flight in aviation’s quest to move ever higher, ever faster, toward the unknown. Beyond Blue Skies examines the 30-year period after World War II during which aviation experienced an unprecedented era of progress that led the United States to the boundaries of outer space.

Between 1946 and 1975, an ancient dry lakebed in California’s High Desert played host to a series of rocket-powered research aircraft built to investigate the outer reaches of flight. The western Mojave’s Rogers Dry Lake became home to Edwards Air Force Base, NASA’s Flight Research Center, and an elite cadre of test pilots.

The role of not only the test pilots but the engineers, aerodynamicists, and support staff in making supersonic flight possible has been widely overlooked. Beyond Blue Skies charts the triumphs and tragedies of the rocket-plane era and the unsung efforts of the men and women who made amazing achievements possible.

"Any reader interested in the history of aviation and space programs will enjoy learning how they made it all work." (H-Environment)

“I recommend this book to anyone who has an interest in the early history of rocket flight.” (Al Worden, command module pilot for Apollo 15)

“A deeply researched and thoughtful history of the X-planes...deserves a place on your shelf.” (Rod Pyle, editor in chief of Ad Astra)

What listeners say about Beyond Blue Skies