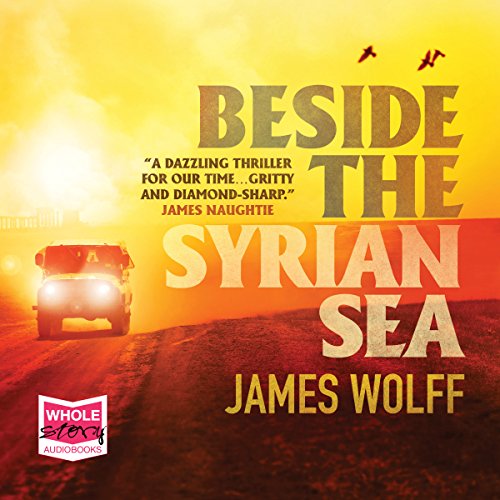 Beside the Syrian Sea

Jonas is a British spy out in the cold. When his father is kidnapped by ISIS in Syria, he heads to Beirut and recruits a Swiss priest named Father Tobias.

Tobias agrees to travel into the heart of the Islamic State and inform the kidnappers that Jonas is willing to negotiate for his father's life.

British intelligence agents try everything in their power to stop Jonas, and he finds himself tested to the limit as he fights to keep the negotiations alive.

What listeners say about Beside the Syrian Sea

Not Bond but son Jonas son.

A very entertaining spy story without the usual formulaic, the setting is contemporary, and the paranoia is eternal. Jonas wants to save his father, but the government he works for will not negotiate with terrorist, the dilemma is simple for him, he will rescue him at any cost, you never quite know how far Jonas will go because Jonas is making it up as he goes along.
Smart and human, with the cunning use of knowledge and strategy against larger forces, a good read.

Good but not quite the whole cigar

An interesting take on the modern spy story. Ticks all the boxes on place time etc, but never quite hits the heights on suspense, polt twists etc. Also the narration is competent but sounds a bit like it was done in the garden shed. Mr Wolff might well have a great story in his locker, but this is not quite it.

Great spy novel set in recent tomes. Great pace and introspection of flawed but believable characters. Would be surprised if they do not make a movie or TV series out of this

Maybe it's just me, but I couldn't engage with this book. I persisted for about half of it and then returned it. The narrator was excellent however.