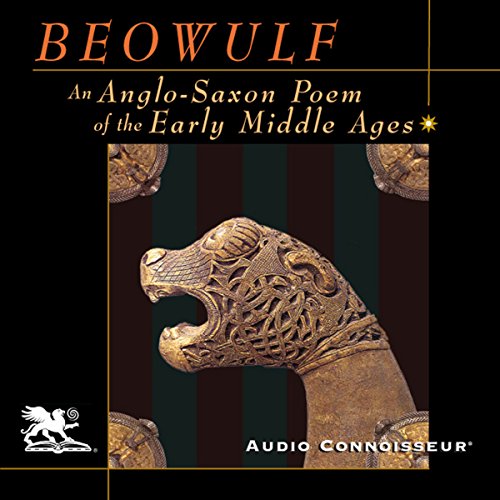 Out of the mixture of Latin & Germanic paganism and the Christianity of the Early Middle Ages sprung one of the world's supremely great pieces of literature. J.R.R. Tolkien, author of The Lord of the Rings, delivered a famous lecture to the British Academy in 1936 in which he maintained that Beowulf was a poem all of a piece, not (as had been suggested) a jumble of fragments for pedantic scholars to paw over. The power & beauty of Beowulf enchanted Tolkien so much that he borrowed freely of its imagery & even of some of its plot when he forged his own epic of Middle Earth.

This medieval masterpiece, written in pre-Norman England Saxon, lay forgotten for centuries, rediscovered & printed for the first time early in the 19th century. It has been translated many times since, and the more people read Beowulf, the more they admire it. For good reason. In strikingly beautiful lines, it affirms the ideal of tenderness joined to strength, and of courage ennobled by virtue. It speaks resounding tones of valor, faith, and honor. It¿s a heroic tale of pagan Germanic origin, a saga of a vanishing age retold in the new light of the Christian era. Its author, most likely an educated monk from Northumbria, was certainly influenced by the work of Virgil. The old pagan legends of blood feuds & monsters formed the dark background against which the Christian hero Beowulf would shine forth with deeds of courage & virtue. Of all old Anglo-Saxon poems, Beowulf is the greatest.

This version of Beowulf is organized in 17 parts. Within some sections, there are digressions which do not, strictly speaking, belong to the central plot. These sections, called "lays", have been enhanced by an echo to help the listener detect them. An introduction by Henry Bradley precedes the poem.

What listeners say about Beowulf

As good as it gets!

After listening to Mr. Griffin's inspired version of Virgil's Aeneid, there was simply no way I was going to pass up on this one. Beowulf plagued me in college. I struggled with it, basically just to get through it. If only this recording had been available to me back then. Although the poem itself is not as linear in development or as clear in its meaning as, say, The Iliad or The Aenead, it yet possesses a power which is very peculiar. I think much of this is a result of the rich alliteration and powerful symbolism that is spread throughout the work. And, as the publisher's summary says, there is definitely an echo of Virgil here. I was so captivated by the power of this epic poem that I went out and bought the Kennedy translation just to follow along. Even better! I cannot say enough in praise about Mr. Griffin's work here. His ability to instantly pull you into the story and keep you riveted to the words borders on the magical. Like everything he does, the production values are top notch. If you are even slightly curious about Beowulf, this is your golden opportunity.

A strange tale told in a strange way

Since high school (too many years ago) I've heard about Beowulf but it was always something that I was told was an "acquired taste" like Limberger cheese. But I heard so many good things about this new translation that I felt it deserved a chance. The narration with unobtrusive background music really made the story come alive so I would recommend it for anyone wanting to get an understanding of English/Danish sagas. This is the sort of tale that was told around the fire while our ancestors were drinking mead as the dogs crunched on the bones scattered on the floor. It deserves quiet time on a rainy weekend to get the best effect. While there are some exciting moments (as when Beowulf slays Grendel), most of it deals with the events leading up to the fateful moment and the aftermath. If you've ever considered reading Beowulf, this is the one!

good version of B

this grew to be one of my favorite translations recently though they all have something to commend them. I do like Griffin as a narrator in general and he does a fine job here and that may make a huge difference. one thing that may be of interest is the opening introduction which is about 1 1/2 in length i believe and gives some very good historical info regarding B as well.

There are some very nice lines in this one that keep the alliterative element in the line as well as the natural pause within each line, though it is difficult to do consistently. Basically originally it is a 4 beat line with a natural caesura/pause in the middle and the 3rd beat determines the alliteration that matches the 2 stressed syllables from the 1st half of the line & sometimes matches all 4. "places Made ready / for Much traveled Men."

see also my other B reviews. on to Heaney's

This epic was meant to be read aloud, and if you like a dramatic or theatrical delivery, Charleton Griffin brings that out. His diction is very clear and precise, so you don't miss anything.

The story was ok, but the narration was great. It really made me want to hunker down into a fur clad mead hall.

Charlton Griffin's audiobooks always present interesting fusions of narration and music, and the same is true here. The music is generally well-chosen and provides an effective, atmospheric backdrop for the story. The poem is divided here into logical chunks, rather than the original short chapters that often seem to have more to do with length than content. Griffin certainly sounds like an Anglo-Saxon bard setting about his business. In terms of the translation used, though, I'd have to give the edge to the one used by Blackstone, old-fashioned in style but not in vocabulary; this one is old-fashioned in both, in a way that interferes with comprehension.

Captivating but the subject matter must have full attention.

I sampled the Audible readings and this seemed the absolute best of what was available. Having listened to the entire audio book I can say that not only Carlton Griffin’s reading (always first rate), but the entire production leaves the others in the dust. This Audio book is a five star experience!

Beowulf is one of the greatest classics of English Literature! Of course it deserves five stars! And Charlton Griffin has done it again! The guy is a genius!

Great story and narration. Story is heavy on the Grendel adventure and proclaims brave nobility. As mentioned in the intro some parts are choppy, but hardly detract from the story when it fires back up. I advise John Gardener's book Grendel as a tasty companion read.