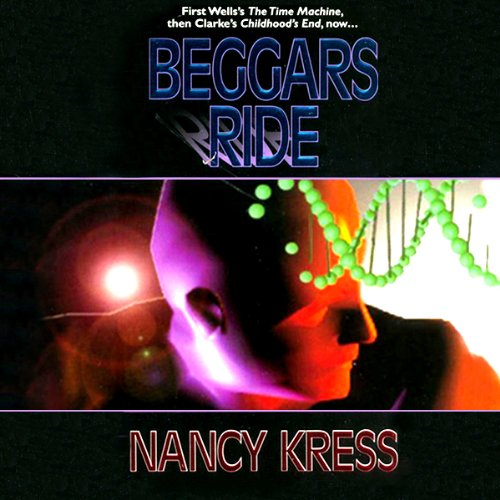 In this final installment of Nancy Kress's award-winning Beggars trilogy, it is now 200 years in the future. Regular human beings hate and fear the Sleepless and the SuperSleepless, genetically-modified humans who are immune to disease and hunger and who do not need to sleep. When the Sleepless plot to take over the world and leave regular humans powerless, civilization and the very meaning of the word "human" hang in the balance.
©1996 Nancy Kress (P)2008 Blackstone Audio, Inc.
Fantasy Genetic Engineering
Show More Show Less

"Highly recommended for sf collections." (Library Journal)
"It should by now be clear to all that Nancy Kress is a dominant figure in modern science fiction." (Analog)
"Masterful....Kress continues in the same tradition of terrific storytelling." (School Library Journal)

What listeners say about Beggars Ride

Wheels come off the cart

I really wanted to like this book more than I did, because I admire and respect Kress's work tremendously. Unfortunately this is a very disappointing resolution of the Beggar's trilogy. The optimism tempered with realism that characterized the first book has completely dissipated by the time one reaches book three. Instead one is left with a view of humanity that is at best discouraging and at worst downright depressing. Perhaps this reflects the current cultural malaise, but I always liked science fiction best when it was aspirational and heroic rather than defeatist.

Wrapping up the Beggars series, Kress delivers a healthy serving of dramatic goodness. There are shocking moments that feel like top-notch cinema. And deep dives into spooky scenarios that leave readers stunned. But all that happens and is over and done with two hours prior to the epilogue. My advice to fans of the series: after the extra terrestrial outpost gets nuked, allow the beggars to ride on, without you. I say that out of love for the series, as I want your memories to be of three great books, not one lukewarm, wooden, inert conclusion.

Reasonable closure for the series

I listened to all three of these books in a row, and this last one was my least favorite for a couple of reasons:

- There’s a bigger continuity break between the second and third book than I expected. The almost-complete absence of the characters from the first two books, and the hand-waved references to some of them having died left me feeling unsatisfied from a “village character” perspective, even though I found the end of this book to be a reasonably satisfying end to the larger fate-of-humanity storyline

- I didn’t like the way the narrator’s reading of Teresa’s parts made her sound like she was extremely low-IQ. She was paralyzed by debilitating anxiety and emotionally overwhelmed, but it doesn’t necessarily follow that her intelligence would be that underdeveloped, and to me, that made Teresa’s storyline and development arc harder to credit, even by sci-fi standards.

- There’s a love storyline that I found unnecessary, forced, and artificial. I just didn’t buy it, need it, or like it.

I did like the series overall, though I probably won’t re-read it. And I really would have preferred a broader shake-up of the molasses-thick class prejudices in which the whole series is soaked. This universe really demanded a global wake-up call that never came.

I am really drawn to the writing of Nancy Kress. This last book of the sleepless series has a good story but the performance was just under par for me.

What is the point?

Boring,disjointed, not going to waste any more time on it. Need fifteen words to submit

This series is a good one. The characters are likeable and real. Kress drops them off way too often in situations where it seems like she had problems continuing their stories. It makes me wonder if she would ever write a fourth book.