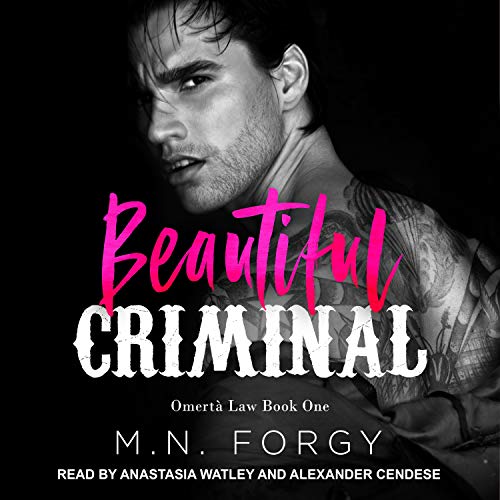 The public labels me a Mafia monster, a man without a soul, and one hated by many. They're not wrong, and I'm not sorry for it.

When my father orders me to marry a longtime enemy's daughter to settle a score between our families, she did what any smart woman with a beating heart would do. She ran. So, I hunted her down.

She tries to negotiate for her freedom, but despite being inexplicably drawn to the deviant woman, I refuse her pitiful bribes with pleasure. I'll promise her freedom to get the answers I need, but I'll burn this city to the ground before I let her go.

What listeners say about Beautiful Criminal

I love a good Mafia love story and I’m happy to say that my library contains many with five star ratings.. but unfortunately this one won’t be joining them. Omertà Law says I shouldn’t squeal, my lips should be sealed and my answer be “I know nothing”. But, even if I do end up ‘swimming with the fishes’, I’ll spill.. So why two stars?.. well narration for one.. Anastasia’s voice was whispery and quiet and, IMO, she couldn’t do a believable male voice - let alone a possessive alpha Made Man’s deep sexy voice. And because of this, their disagreements held no weight, their verbal sparrings were powerless pussy punches and the heroine Leona just came across as a weak, spoiled, out-of-her-depth Mafia Princess who was clearly not fit to step-up and claim her birthright as the Bravado familia’s Boss. Alexander was ok as Kieran DeAnjelo the rival Mafia Family’s Underboss and son of the Boss.. but his female voice (for me) was cringeworthy.

Two pawns manipulated caught in a web of sinister secrets. One decade’s old mystery of a father's disappearance leaving the Bravado dynasty without a Boss (Leona’s). One ruthless evil DeAngelo Boss (Kieran’s father) who is the viper waiting to strike, the spider spinning a tangled web, the great white whose bite will cause bloodshed and kill on it’s first snap. There’s a proposed arranged marriage where the lamb flees.. but one day for the wolf to find her.. and one day for lamb to happily throw wolf her V card. Also, half a day where the wolf becomes a besotted lap dog. And it took 80% of the book.. (or three/four of their days), before the plot picks-up with treachery, murder, betrayal, questions, allegations, bullets, bloodshed and hot tears which destroy their status quo. An enemies-to-lovers errr.. romance (shrug just didn’t personally feel it) where the past is shared, where history’s heartache and loss is exhumed, where hearts are mended.. and where Kieran and Leona stand united ready for war.

Apart from the narration, I didn’t think the story had much depth. In a matter of days, Kieran went from being a ruthless bad-boy, a slick groomed Underboss and a cold man who loves designer clothes, guns, the cruelties that can be done under the cloak of the night and one-stop hookups - to a devoted fiancé who is at war against his own familia for love. It’s a happy for now dual POV story that will continue and will, no doubt, heat up.. but sadly I won’t be there witnessing the possible mayhem because sorry, I just didn’t like the narration and didn’t feel any fiery heat.. or flaring chemistry.. or any passionate magnetism between them.

WORTH A CREDIT? Over the years, hearing awesome A List narrators whose vocal talents truly bring to life characters to fall in love with and stories that grip your senses, thrill your soul and excite your blood with delicious feels. And unfortunately (or fortunately) they have totally spoiled me for anything less than.. and this audiobook sadly suffered mainly because of the narration. So no, for me, this isn’t creditworthy.. maybe a better read.. or maybe you’ll love it all.