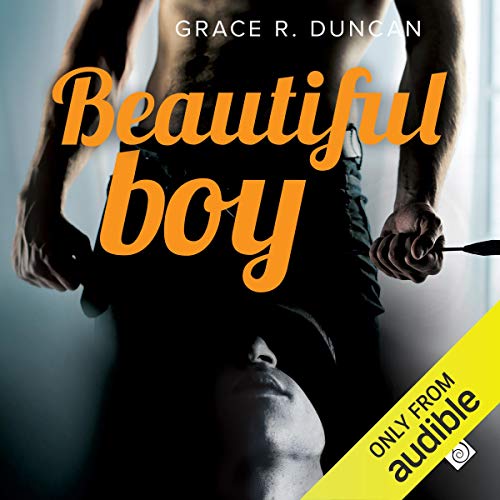 Malcolm Tate hung up his flogger when his submissive sought out another Dom and landed in the hands of a serial killer. Convinced his lack of dominance sent his sub away, Mal has spent two years blaming himself for what happened. But when his best friend finally convinces him to go back to the local dungeon, Mal's grateful. Especially when he wins beautiful, submissive, firmly closeted Kyle Bingham in a charity slave auction.

College grad Kyle hasn't earned enough to move out of the loft his conservative, homophobic parents bought, much less to buy any of the other things still in their name. When he's won at auction by the hot, amazing Mal, he's shocked that anyone would want him. No one else seemed to - not his parents, his former Doms, or any of his disastrous dates.

But Mal does want him, and Kyle lets his guard down, only to be outed to his parents. With his world crashing down, he must find a way to trust Mal - and their developing relationship - or risk losing everything.

What listeners say about Beautiful Boy

The book was very nice, and got better once I got past the first chapter. The voice the narrator uses for Mal makes me sleepy, so it was difficult to focus on what he was saying. The pauses between spoken lines and speech tags were a little too long for me, but that might be a cultural thing.
Over-all, I'm likely to read it again at some point, but it's not one of my favourites.

I hope the Author is writing a second and third book. I loved this one just need to know how things go with Kyle's Parents and how their relationship develops now that they are living together.

The narrator voice was awesome for this book!

Liked it. A little to sweet for me but once I started listening I had to finish. Narrator did a good job. It took me a while to get use to Kyle sounding like a kid based on how he was described in the book. Loved how natural the BSDM view seemed.

The story of Malcolm Tate and Kyle Bingham is a really good one. I liked how Mal and Kyle fell in love. It wasn't a traditional love story but that's why I fell in love with it. Mal was good for Kyle and vice versa. Kyle was my favorite part of the story. Kyle made me smile and laugh and I liked that he fell in love with Mal. I loved how Mal and Kyle were together. I really loved the ending but I do wish that this will have a sequel. I would like to know how things go for Mal and Kyle after the ending of this story. It feels like there should be a follow up to this. I want to listen to this again because I totally enjoyed it. This was my favorite audio book of all.

This book is Unbelievably HOT in Audio..
The Audiobook Raises my initial rating of the book from 4 to 5 stars.
I was completely submersed in this book from the very start and did not want this book to end, I would Love to have another book, or even just more of these characters at some point. The narrator Joel Leslie just does an absolutely stunning job with the Dom/Mal and the Sub/Kyle's different parts in this story, making it a more than believable story between the two characters.. And getting to hear this story compared to just reading it, gives us a completely and totally different feel for the book; that everyone really should experience for themselves.
We get a good deal of actual story in this book mixed in with the relationship these characters develop with each other. But bottom line is we get a HUGE amount of sex and playtime in this book since the characters are basically living the lifestyle 24-7. If you Are Not looking for a BDSM book with a lot of sex, then please be warned now and pick a different book. LOL
Dom/Mal is finally brought back into the scene by his friends several years after his previous subs death at the hands of a serial killer. And he literally jumps right back in once he sees Kyle. They are drawn together right from the beginning.
I love all of the minute detail we get in this book about all of the aspects found in BDSM. At the beginning the Author tells us that this isn't really an instructional book on BDSM play and its really not. But we get so much detailed information blended into the storyline from start to finish about different types of play and how to make it safe and about different kinks and limits and how to make it work between two people. The knowledge that all relationships involving Kink, or not, will always be different from one couple to the next. Just an absolutely well thought out and well researched subject that comes across on the paper in this book so well, and is sooo damn Hot to read and hear..
Kyle is an absolutely beautiful sub, who at the beginning of this book hasn't yet had the chance to see just how far and deep his submissive side and needs run, until he meets Mal. At that point he starts to figure out he can finally be himself, without reservations, even if its sometimes hard to let go even knowing someone will actually be there to catch him when he stumbles. He just needs to learn to trust that Mal wont leave him like everyone else in his life. I really hated Kyles parents, and for me that part of the story was pretty predictable in how it was all going to play out, but I did like how it was written in and how it played out for Kyle and Mal after the fact of them being the horrible "parents/people" they were.
I personally really enjoyed this book immensely, especially in audio. But for sure there will be people out there who won't, so definitely go into this one with open eyes and if its not your thing *shrug* just move on to the next one...

Beautiful is the only word for it.

I was entranced from the first chapter. While the romance was less than traditional, I haven't read a more compelling tale of true love in quite some time.

A beautiful story of love and life's journey of discovery and narration was superb too.

Long one but good

What a "beautiful" and all-consuming story. I am Very impressed! Great balance of sexy times and deep love.

I love Joel Leslie's voice so I thought I would like this story. I was wrong. I've listened to about haft of the book and while the play scenes are good, that's all there is to the book. There is little to no character development, no plot, nothing to move the book forward other than the play scenes.