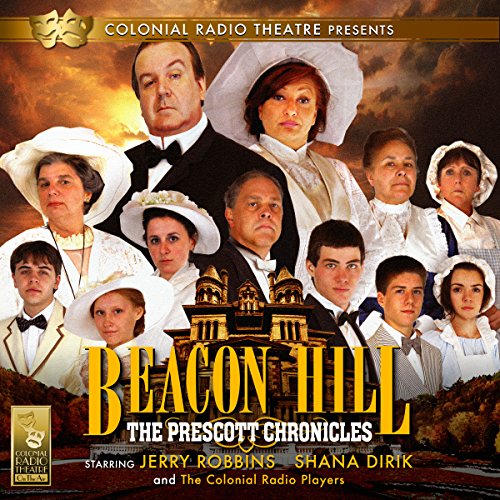 The CRT mini-series Beacon Hill is re-edited and compiled here as a continuous feature story, Beacon Hill - The Prescott Chronicles. Set in 1898 Boston, it's the upstairs/downstairs life of the Prescott's, their staff, and the power that patriarch Charles Prescott has over his family - and the city. The award-winning Colonial Radio Theatre On The Air invites you into the mansion of the wealthiest family in 1898 Boston with this epic story of love, deception, intrigue, adventure, and secrets... in the house of shadows on Beacon Hill.

What listeners say about Beacon Hill - The Prescott Chronicles

I'm a huge fan of Colonial Radio Theatre anyway, so when I found this I was so happy! I've listened to those program multiple times and the writing and the characters are fantastic. I love the grandmother, she cracks me up. This is a wonderful upstairs/downstairs drama, and it has become one of my favorites from this company.

It took me a while to get over the really pretty bad english accents and the forced precise language of the above stairs characters but once i did i really enjoyed this.

I was particularly impressed that homosexuality is acknowledged in this series as a normal part of life, above stairs and below, Just like it was referenced in Downton Abby. I gave this Chronicle an extra star just for this extra bit of realism. Very very well done!

Keep your expectations in cheek and don't expect Julian Fellows type writing and Oscar winning voice performances. If you can manage that you will count this a credit well spent.

I'm so sad there is not a third series! I want to know what happens next.