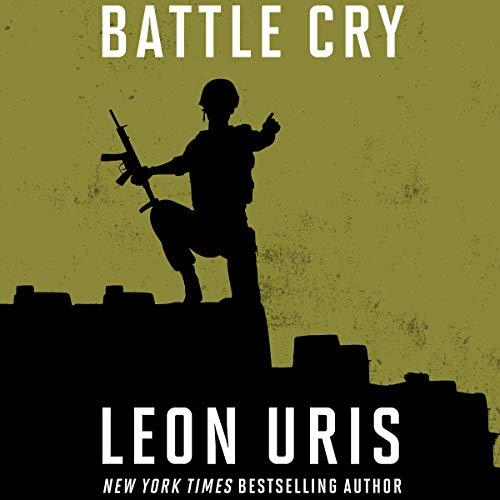 By: Leon Uris
Narrated by: Patrick Lawlor
Try for £0.00

Originally published in 1953, Leon Uris’s Battle Cry is the raw and exciting story of men at war from a legendary American author. This is the story of enlisted men - Marines at the beginning of World War II. They are a rough-and-ready tangle of guys from America’s cities and farms and reservations. Led by a tough veteran sergeant, these soldiers band together to emerge as part of one of the most elite fighting forces in the world. With staggering realism and detail we follow them into intense battles - Guadalcanal and Tarawa - and through exceptional moments of camaraderie and bravery, Battle Cry does not extol the glories of war, but proves itself to be one of the greatest war stories of all time.

What listeners say about Battle Cry

I started to read this book while I was an enlisted man in the marine corps back in the late 80s and into the late 90s. I never finished it. Until now. Well worth the wait. I really enjoyed this book. Semper Fi

The narrator ruined it for me.

The book is amazing, the narrator is terrible. I would recommend reading this book yourself.

struggled to finish and eventually gave up. to slow and boring for me. unfortunately I couldn't return it

I did not like the read. person did not pronounce,

I did not like the person reading and changing voice pitch. especially a woman .

I understand a man reading a woman’s voice must be a bit tough, but this guy made all the women characters sound like bad drag queens - that, and his horrible New Zealand accent. He would have been better off just reading them in an American accent.

Regardless, the story was entertaining and detailed, as are all Leon Uris books.

exceptional read! if you love the history of ww2 you will love this book. a must read.

could not get through it

I'm a big Leo Uris fan... but this was terrible. Bad story, cliche and unbelievable characters... and one of the worst narrators I've ever heard.

Cannot endure enough of the "voice" to make a determination of the overall story. An added negative is that the story jumps about with no rhyme or reason leaving the listener to "guess".
I need to return this drivel.

Being a Greenside corpsman And the son of a career Marine I can still only imagine what it was like for these young Marines. I was drawn into the characters lives immediately and I found it hard to walk away from. All the way through the book and the war. Then at the end I found myself in tears thinking about each brother even though I knew it was fiction because I had the opportunity to hear similar stories through my life that made me proud of all those who served and sacrificed so much for this great country …

I first read this book in 1970 or 71. It was the reason I enlisted in the Marines - 26 years later I retired as a CWO. Many parts of the book are exactly what I went through especially book camp and the rifle range. Great book, great story, a little weak on the narration. The book is told by a crusty Sergeant, and the voice just doesn't fit. It would have been much better with a gruff voiced narrator. But, still well worth the listen.