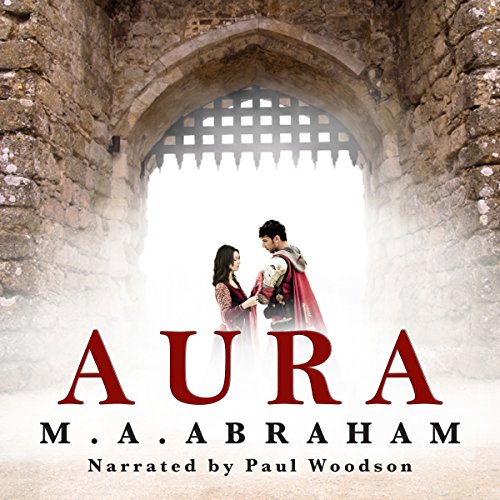 Aura is her mother's love child, a living memory of the biggest mistake she ever made, and she never lets Aura forget it. Shunned by her mother, dismissed by her stepsisters, Aura drifts through life. She has little to sustain her miserable existence but her dreams. Until fate takes a hand and tosses her far into the past, a past she must learn to survive in. Alone with nothing but a couple of pets Aura learns what it is like to be on her own. She learns how to make a life for herself in a time where she does not belong. Or maybe she does.

Thorn is the right hand man of the Duke Vernon. He is a warlord, a great warrior and leader. He also has a belief that somewhere in the world his soul mate waits for him. Each day he prays for the guidance that will bring her to his attention, but when it does, will he know her? Will he accept that she is the one who is meant for him?

Aura finds a knight beaten and left for dead and she nurses him back to health. It is the first time Thorn meets her, but not the last. A year later they meet again, by then she is a favorite of the Duke Vernon because of her knowledge. Vernon wants to keep her close because of what she knows. Thorn wants to keep her closer but for other reasons. Here is the woman he has searched for, his soul mate. Can he hold on to her, or does fate have other plans?

What listeners say about Aura

Listening to t this audio book, right from the beginning she drew me into her story as she weaved the tail of an unwanted child. You wanted nothing more than to reach inside the story and give her a great big hug.

not what i expected

I like the way the author's heroine is a strong woman that is not about to have someone decide things for her. She comes from a family that ignored and abused her and yet she remained strong and shared her talents with others. The Hero took awhile for me to like. Here is a woman fighting to save his life and he also tries to abuse her and she walks away---that took a lot with her background. Later when he is able to realize that she is a woman of worth he is able to adjust to the situation and really love her not just see her as a sex object. I liked the romance, the time travel and didn't mind the narative style of the book

This was a wonderful romance. The character were good and the narrator brought the story alive. I look forward to other books by this author.

Time travel and romance. How suited are they? They seem to go together like chocolates and flowers! There are so many of them out there. My wife got me watching Outlander with her, and I can see shades of that tale here.

As much as I don't really care for namby pamby lovie dovie stuff (I'm more of a cerebral/action fan of time travel) I have to admit that I liked this book. Like I said, Outlander has really primed me for this sort of stuff, but then I look at Somewhere in Time and Time After Time that only worked because of the love story. You can feel the emotions between the characters.

One thing that really threw me off was the use of a Male narrator. Nothing against Woodson; he does a great job, however I am very used to a female lead having a female narrator. I guess that's a little sexist, and I apologize, as Woodson should not be shamed by this statement. He totally nails the story, and brings the characters to life aptly. In fact, he kind of helped me get over this hangup. Even though I did receive a promo code for this review it in no way influenced my considerations of the material, and in fact, inspired me to be more honest. In fact, getting a code generally makes me harsher as a reviewer as I am more often concerned what someone like Me will decide based on my review.

This is a good story, with a full of feels romance. I enjoyed it and there was not one magic spell or an elf to be seen. I think I'm getting soft in my old age.

This is the first time I’ve ever said that a book over 10 hours should have been longer or made into two parts. There is so much this story has to offer by expanding on Aura’s home beginnings, the first time she met Thorn, Thorn’s dreams, her father’s devotion... So much to this touching and slow build love story.

PAUL WOODSON! Granted, a female is usually the lead for a book like this but Paul was just wonderful.

It is very powerful and deep tale of a young woman, Aura, who is very unhappy due to the lack of love she craves from her mother which is never freely given. This has repercussions in her dealings with facing her soul mate. She finds him in the distant past where she is transported back in time from the cave she takes refuge from the hurt heaped on her yet again by her Mother. She adapts and grows as she did all her life, she is strong, witty, but afraid to believe that love does exist.
Thorn is a highly respected warlord, a very strong and proud warrior, also very warm and caring. He has dreamed about his soul mate for some time and those dreams come true when he meets Aura. Despite the rough beginning, their relationship blossoms into love. Makes us believe that you have to really believe in something, never let go of the hope you hold strong, and only then it will become reality.
I strongly recommend this book, it is a journey of two people who complement each other and together they are whole. A story showing that loves transcends time and place.

I loved the book when I read it, but hearing one of my fave voices performing it made an even better experience. Love the accents, emotions come across beautifully. You got to listen to this!!!

A wonderful love story! Great storyline, I fell in love with the characters, and M.A.'s writing makes you feel as if you're right there in the story.

I enjoyed this book about the heroine finding herself in time traveling hundreds of years prior to her birth. My heart went out to Arab because of her unhappiness with her family life. I wanted to smack her mom many times. Her stepfather showed her his love. When she met Thorn her life was never the same. She found her HEA with him and their way of life.

The narrator, Paul Woodson did a fabulousjob of bringing this story to life. He has a warm, and smooth English accent befitting the story based in England.

I love Paul Woodson and time travel romance. this started off decently but really lost momentum during the second half. There doesn't ever seem to be a feeling of suspense. The enemy was literally called "the enemy" and it never felt like any of the characters were in actual danger. The heroine is supposed to be a smart and strong willed woman but agrees to marriage to a man who tried to assault her. She spends the last hour of the book moaning about not feeling connected to the past despite claim to be deeply in love with the hero simply because she hasn't popped out a baby. This book is a solid swing and a miss for me.

This was a god book. The story kept my interest as well as the narrator's interpretation. It is light, romantic with some history and time travel.

i enjoyed this book

aura is a time traval book. she goes back to the medevil times and finds the man she can love thru out all time. there are great twist and turns in this story. the narrator was wonderful in his telling of the story.