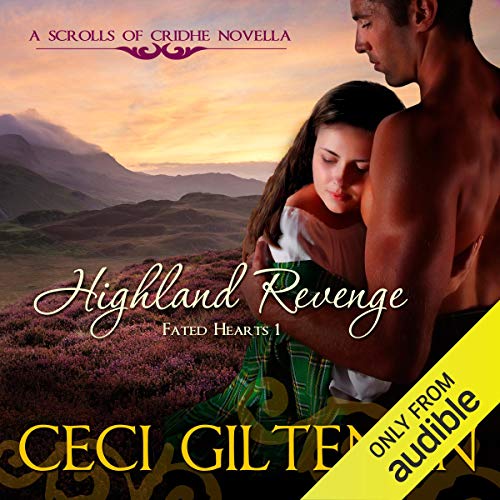 Originally published in the collection Highland Winds, The Scrolls of Cridhe Volume 1.

Does he hate her clan enough to visit his vengeance on her? Or will he listen to her secret and his own heart's yearning?

Hatred lives and breathes between medieval clans who often don't remember why feuds began in the shadowed past.

He will never forget how he was treated by Bhaltair MacNicol - the acting head of Clan MacNicol. He was lucky to escape alive, and vows to have revenge.

Years later, as laird of Clan MacKay, he gets his chance when he captures Lady Fiona MacNicol. His desire for revenge is strong but he is beguiled by his captive.

Can he forget his stubborn hatred long enough to listen to the secret she has kept for so long? And once he knows the truth, can he show her she is not alone and forsaken? In the end, is he strong enough to fight the combined hostilities and age-old grudges that demand he give her up?

What listeners say about Highland Revenge

I have often recommended this series to others. It's a really enjoyable audio book!

What other book might you compare Highland Revenge to and why?

Any of the other books in this series would well compare to this one . Writing, plot & characters are excellently done and the narration is was very enjoyable.

Which character – as performed by Paul Woodson – was your favorite?

I believe I liked how Paul Woodson portrayed Owen. I have enjoyed listening to several of Pauls books!

There were several moments in this book that touched me, but I can't narrow it down to one... that is just the grace with which Kathryn Le Veque writes!

Love listening to audio books while I'm doing jobs that require the use of my hands. I love the hands free, the narration S, hearing the variances in the voices and accents of characters. Love, love, love audible!

For some reason this book was in my library for a long time before I was inspired to listen. I think maybe it was the awful cover art that put me off. Eventually I got around to listening andI'm glad I did. It was short, but remarkably detailed and very well done.

NARRATOR:.Being my favorite "just for fun" genre makes me more attentive in some odd way and I think at first Paul Woodson put me off. He is VERY good... but it takes a little while to hear the story instead of him.

First of all , Ceci Giltenan is a wonderful delightful story Teller that never disappoints. I also find that time absolutely flies by when listening to any of her audiobooks . You will find yourself experiencing wide ranging emotions while yearning for happy endings for the variety of heroes and heroines.
Laird Eoin MacKay remembers the reasons for his living hatred of Clan MacNicol . He remembers as a young man being taken prisoner by Bhaltair MacNicol . The time spent barely alive in the dungeon cells . Death was inevitable except for the aide of a young MacNicol . Now years later can Eoin see past his hatred when he takes Lady Fiona MacNicol hostage. His hatred and loathing are strong for Bhaltair MacNicol . But can he see past them to the beauty of his captive ?
Lady Fiona MacNicol has a secret. One that can change the momentum behind Eoin’s pulsing living hatred. But will he listen? Can he believe a MacNicol ? Will he be the one to show her she isn’t unworthy of a ransom but worthy of that as well as love. Will Eoin forsake old hatred and grudges ? Will a love be born from the embers of hatred?
Highland Revenge is the first of the Fated Heart Series.

A thoroughly enjoyable story. The characters were developed and the storyline was easy to follow. I'm looking forward to more!

Too short for the $$. Good story. I supposed I must listen to this in order to stay up to speed if I want to listen series. Not sure I will.

I could NOT even finish it

What would have made Highland Revenge better?

More Character development would have made it MUCH better. It really felt rushed.

I'm going back to the Outlander series

None. It made me feel NOTHING. That's not why I read/listen to highland romance novels. I WANT to FEEL something for the characters. This fell woefully short.