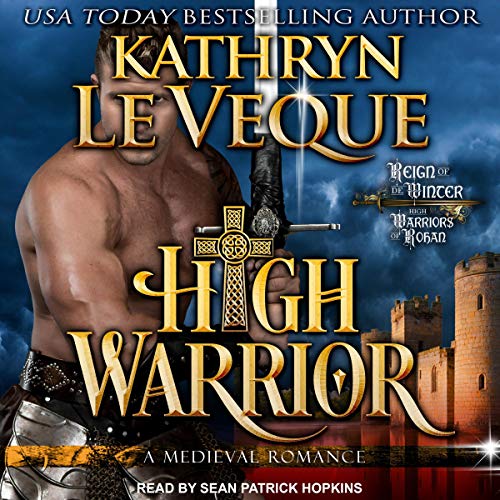 A big Irish knight, much beloved by his English men, faces his biggest challenge when an injury nearly claims his life...and his confidence as a warrior.

The man known as the "High Warrior" is an Irish knight with an English overlord. Sir Bric MacRohan serves the House of de Winter as the head of the de Winter war machine. He is big, loud, and fearless. Once the most aggressive, all-powerful knight in the realm, a great injury forces Bric to realize that he is, indeed, mortal. Though he recovers from the injury, it changes how he commands his men and how he handles himself in battle. Mentally he is far more injured than he is physically.

Enter Lady Eiselle de Gael. The daughter of a bastard of the Earls of East Anglia, Eiselle is "gifted" to Bric by a very dear friend as a reward for saving the man's life. The lady is resigned, but Bric is positively adverse. He doesn't see it as a reward; he sees it as a punishment.

When the greatest swordsman that England has ever seen lays down his weapon due to battle fatigue, it's up to Eiselle and those who love Bric to pull together to help Bric recover what he has lost...himself.

What listeners say about High Warrior

It made great listening and I enjoyed the story of these medieval characters having read the book.

Could not put this down

I have for all her books. She is my favorite writer for that century. Hands diwn

Started off great died in the middle : (

I was so hoping this was going to just
keep getting better ,
but It died in the middle and I just couldn’t
make my self listen any longer .
The narration is good.
I always hope to hear the stories
Kathryn Le Veque use to write .....but
there are all quickies now. I use to be a die
hard fan .... I’m calling it quits-maybe I’ll
just listen to her first books again. KL

Loved this story by Kathryn Le Veque and Sean Patrick Hopkins does it justice. I hope there are more books to this series. Love the Irish ☘️

I smiled and I cried while enjoying this story... which was not like any of the others.

Waiting for the next adventure in this series!

First one I did not care for

This did not have enough action, nor was it really romantic enough. Seemed like more mental problems th Han anything.

this was so boring and cheesy compared to so many of her other novels. I couldn't wait until it was over.

This book has received only the highest ratings when I purchased it but unfortunately I don't think it is that good or worth the credit. I have tried to listen to it, had to stop and came back, but I still can't finish it. I am sorry if I am going to spoil the book for future listeners but here is what I have gathered so far. While I understand the suffering of one's mind and feel compassion towards the warrior, but that's all there is. Women in this story are horrible... Yes you want your heroines to have back bone, but the women in this book are just purely mean... Wishing that someone's child might "accidentally" end up in a pond and drown is beyond anything. Especially if you are a mother even to a spoiled child, you would not really wish that upon anyone. The men in this book are soft hearted and have more compassion than the women... It's all backwards... Men" giggle" and women are ruthless... Just can't finish it...