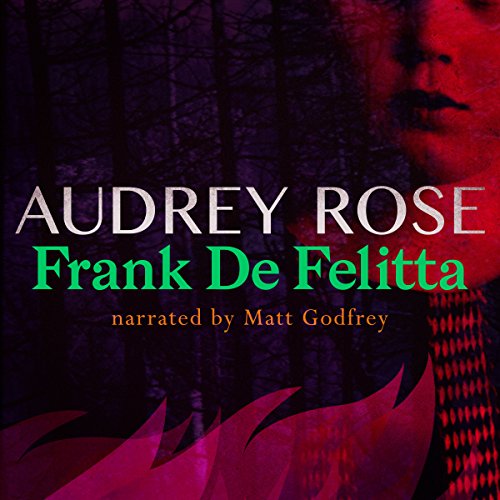 By: Frank De Felitta
Narrated by: Matt Godfrey
Try for £0.00

The Templeton family's peaceful lives are plunged into chaos when their young daughter, Ivy, begins to be stalked by a strange man who believes their daughter is the reincarnation of his daughter, Audrey Rose, who died in a fiery car crash. Frank De Felitta's Audrey Rose (1975) was one of the best-selling horror novels of the decade, selling over 3.5 million copies, and it remains a chilling classic of modern horror.

What listeners say about Audrey Rose

This is the book the film Audrey Rose was based on. It is a good horror type story but I do think that the parts depicting the court scenes are just a bit too long and start to get boring, same with the dairy made by the father of Audrey Rose as he travels to India to learn more of reincarnation. A sad ending but a good listen all the same.

A redefined classic of life and death

Audrey Rose lives! A poignant story of life and death that is beautifully written and narrated

I didn't know much about the book before I started listening to it. I wasn't aware of when it was written either. I don't see that this book being older than me has any impact on the story as it held up just fine for me. I wouldn't call this horror by today's standards but it has the classic feel of a horror. As a father of a girl I can say this story is horrifying but in a mystical way so that it didn't seem realistic enough to actually scare me. Ivy's father's behavior as the story progressed maddened me enough that I was actually angry more than anything else.

The story itself to me seemed to be two parts. The first part was the background and buildup and then the second was the courtroom proceedings and resolution. I'm not a fan of courtroom drama and wasn't happy with the ending so that is why I gave the story 3 stars. I don't mean to say the story wasn't good. It was unique and neat; but, not really my style of horror.

Matt did a good job narrating. For some reason the sound of Matt saying &quot;hot, hot, hot&quot; has suck with me.

Well this was a seriously pleasant change of pace from my normal horror listens! I could tell that 'Audrey Rose' was written in the past based on some of advancements in society, not based on how relevant it is to today. I think this story very much holds it's own in 2017.

It starts out as a good old fashioned stalker story but quickly turns into a merry-go-round of what's possible in the human mind. A large portion of this book takes place in a court room and asks that the listener, along with the jury, ponder the feasibility of reincarnation. While the trial takes place, there is no shortage of spooky/paranormal happenings for the reader. I would recommend this book to anyone who enjoys horror/thriller/paranormal genre content and who also enjoys a good classic!

I am at a loss for words, which is unusual for me. It was difficult to stop listening to this remarkably written and narrated work. All I can say is, "just read it."

I was terrified, creeped out and sitting on pins a

Audrey Rose is a serious and well written story about a small child who died in a fiery crash and has come back reincarnated as Ivy Templeton.  Audrey father, Elliot Hoover has spent years learning about reincarnation and Hinduism and more to find peace and determine if a psychic’s words that Audrey is alive and well, living in New York is true.

Hoover becomes a weird stalker type trying to convince the Templeton’s that he needs to be in Ivy’s life as she is his Audrey Rose.  As good parents, the Templeton’s try to stop Hoover but ultimately during the court case, psychiatrists are called in and there discover the truth – the horrifying truth.

As a parent whose son was born within minutes of the Space Shuttle exploding in 1986 (I was grateful he was born first!), I understand the fears that parents can experience.  Frank De Felitta plays on those fears and many more.  Detailed descriptions of the painful and terrifying death of Audrey and the melting ceremony at the boarding school with Ivy – I know my heart came near to stopping several times!

Although written in 1975, Felitta knows the fears of parents well and plays those fears and emotions to perfection.  The narrator, Matt Godfrey performed the story well.  His &quot;Hoover&quot; voice was adequately creepy and his &quot;Mr. Templeton’s&quot; voice was perfect as the father.

There were no issues with the production or quality of this audiobook.

The narration makes the most of a &quot;meh&quot; chiller

I received a copy of this book courtesy of Valancourt Books &amp; Audiobookboom, thanks!

I have vague memories of being afraid of this movie when I was a kid and that was all I remembered so when the chance came around to listen to the audio I grabbed it. I’m terribly impulsive like that.

The Templeton’s have a lovely home in Manhattan, a beautiful young daughter and an all-around perfect life. You know that’s all blessedly coming to crashing halt right now, don’t you? One day a strange man starts lurking about, sending gifts and doing other strange stalkery things. Who is this weirdo and why is he tarnishing their perfect world with his pestering? He eventually reveals that their beautiful daughter Ivy is the reincarnation of his deceased little girl Audrey Rose and he wants to be a part of her life!

That’s scary stuff for any parent, even these two. I say that because in one of the most disturbing scenes for me, they both ignored the fact that their adult neighbor/friend looked at Ivy’s blossoming bosom and made a lewd comment (she’s 10 or 11, btw) and then they all continued on with their festivities. Are you kidding me? I’d like to think that things weren’t that different in the 70’s. That pedo should’ve been stabbed in the manparts and unwelcomed forever. This didn’t give me hope for the well-being of poor Ivy.

Moving along . . . the stalker-man thinks it a wise idea to kidnap dear Ivy who is suffering from terrible night terrors and a courtroom drama consumes the plot for way too long. This is where the book pretty much lost me. No fault to the book but courtroom dramas are one of my least favorite things in the world. Seeing as I didn’t particularly care for any of the parents and the woo-woo wasn’t that interesting to me, I started to wish I were reading something else.

The only thing keeping me going, and I do not exaggerate here, was the narration by Matt Godfrey. I swear that man and Will Patton could read their grocery lists and I would be enraptured. Godfrey’s voice is comforting and calming to me and he does great work with all of the characters. I know for an almost fact that I would’ve DNF’d this book had I tried to read it in paperback/Kindle form because I have no tolerance for books that bore me and that’s what this one did.

If you want to revisit the 70’s with this book, make sure you grab the audiobook!

I’d give the story a 2 but the narration a 5 which averages out to a three (hey, my review, my math!).

captures your mind...can't put it down.

The story begins following the life of a young girl then the plot twists and you spend more than the last half of the book hearing the story play out through a court case scenario. A real page turning novel written in an era before all if our modern conveniences of information were thought of and all communication was through a land line.

Excellent narration for a so-so story

I completely concur with others who have complained that the story gets bogged down in the second half by the courtroom drama. I found it extremely dull. The first part was very riveting and well written. I was especially impressed with the atmosphere created by the author (remember when it wasn't so easy to reach people by phone??? And when you have an emergency what do you do??) Matt Godfrey's narration is, as always, fantastic.

On a side note, I think someone needs to write a sequel: the dystopian future where the courts have ruled reincarnation is real and families are broken up because of it......

A man shows up in the life of a family claiming that his daughter has been reincarnated into their daughter.Written in 1975 it holds up well.I enjoyed it.Matt Godfrey did a fine job narrating this book.“I was voluntarily provided this free review copy audiobook by the author, narrator, or publisher.

I was provided this audiobook through Audiobook Boom at no charge by the author, publisher and/or narrator in exchange for an unbiased review

I read this book and saw the movie when it first came out in the '70's.. Needless to say, when it came up on Audiobook Boom, I had to have it.. Re-reading or listening as an adult opposed to a teenager, I certainly wasn't disappointed!

It's about a little girl who has been reincarnated. The father of the passed away child (Audrey Rose) has tracked down the little girl. The parents of the little girl (now known as Ivy), are just trying to cope as best they can and not understanding what is going on.

Even though reading this book years ago, I still thoroughly enjoyed it.

Book jumps right in with the mystery. Worth the listen and keeps you guessing. Give it a try.