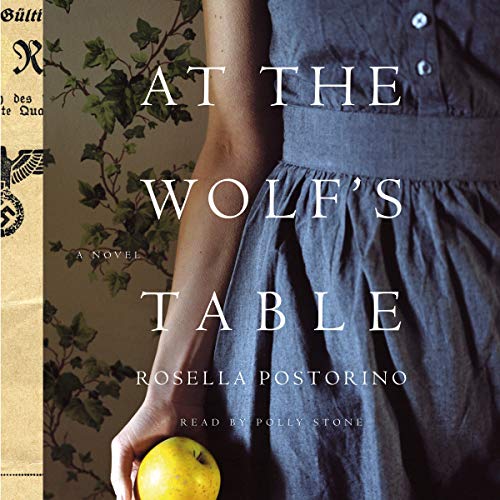 At the Wolf's Table

A provocative and moving historical audiobook based on the true story of a young woman who moved to a village near the Wolf's Lair, Hitler's secret headquarters, and became one of his food tasters.

Germany, 1943. Twenty-six-year-old Rosa Sauer’s parents are gone, and her husband, Gregor, is far away, fighting on the front lines of WWII. Alone, she has little choice but to leave war-torn Berlin behind and live with her in-laws in a village near the Wolfschanze, the Wolf’s Lair, Hitler’s hidden headquarters. Convinced the enemy wants to poison him, Hitler conscripts 10 women, including Rosa, to be his food tasters. Even though food is a luxury, eating the decadent feasts Hitler will soon be served is an act of torture - after each meal, the women must wait an hour to see if they will die.

Every minute seems like an eternity. None of the women are allowed to meet Hitler, none can enter the Wolfschanze, but the führer is a constant presence. He is in every conversation, in Rosa's thoughts, and forever on the radio. He looms large above them all, like some kind of deity.

As the war outside goes from bad to worse, so do the lives of the 10 women trapped in the tasting room, forced to eat what may kill them. Rosa's friends are keeping explosive secrets, the vindictive SS officer put in charge of the tasters takes a special liking to her, and Rosa must figure out how she can stay alive as it becomes clear she and her friends, her Hitler, everyone she knows, are on the wrong side of history.

"Narrator Polly Stone gives us a believable depiction of Rosa Sauer...The story is compelling, and the performance memorable." (AudioFile Magazine)

"[Postorino's] ability to beautifully convey feelings of guilt, shame, love, and remorse in a single gesture is a sign that we will be hearing more from her." (New York Times Book Review)

What listeners say about At the Wolf's Table

I'd been looking forward to this book coming out as the premise interests me - another view on the Nazi machine. But this book, doesn't really get past it's premise.

Possibly my expectations were too high (I'd imagined some Hans Fallada, Nightmare in Berlin expose) - this had moments of being extremely evocative, particularly the first moments describing the food tasting. And then the rest of the background was never truly filled out. Characters acted without real volition and there were gaps that didn't make a lot of sense (without spoiling much, how did she get off that train?)

The most annoying part was that the narrator had a very strange accent. I know this is an Italian author writing about Prussian, Germany - but for some reason the narrator chose an odd mix of both accents. Her name is polly stone, which implies a native english speaker, so this odd half italian/half german/completely odd accent is presumably intended to add to the story - it was instead extremely distracting.

The book wasn't awful - just rather meh. Read Fallada instead. That's riveting and terrifying on how brutalised a population can be whilst still just about functioning.

Fascinating - I loved this!

So I read some of the other reviews and I think I get why people didn't like this as much as I did. There's no redemption arc for the main character. She basically just lives her life and she does what she does for survival. Period. But I think that's what I loved about it so much. This isn't a story that's going to justify the actions of her (or the other tasters) during WWII or give her a happy ending because I think that would defeat what the author is trying to convey. She's this ambiguous character the whole way through because she ISN'T a great hero. But she also isn't a full-tilt villain with malice in her heart or anything. She's just a real person.

So real, in fact, that I had to keep checking to see if this was a memoir. While it is based on real events and there's a woman who had a life VERY similar to Rosa's, I can see where the author took creative liberties.

All in all, I enjoyed this story. I loved the narrator's accent and appreciated hearing about an aspect of WWII that was less known and explored.

On the topic of exploration, I really wish Rosa's and Alfreida's relationship had been developed more. I felt like there was potential for a lesbian relationship or at the very least a much more satisfying friendship between the two. The way the ending happens leaves you in such a state of "what the heck!" and never gives you any resolution for a relationship that made up a large part of the book and Rosa's character.

I also agree that the ending felt rushed and left you unsatisfied. We go from a very linear story line to a very cut-scene type of writing. That being said, that final scene in the cafeteria is beautiful in its subtlety. The experience with the green beans where she's looking around before biting makes your gut twinge. It's that final note of trauma right at the end.

I enjoyed the story as I do all world war 2 books but it was boring and the narrator was monotonous.

Sadness on a platter!

Sure war is sad. But this is a story with no smiles, no comrades, no friendships, no hope.
The main character never learns her lessons in life.
She goes from one scene to another with baggage, infidelity and no gratitude for anyone or anything. She makes mistakes but never learns
Where she could have become a person that could see joy in a flower, she doesn’t take the time to do so. Many people suffered much much worse than she did. Yet she walks through life, even after the war, alone by choice. I got tired of waiting for her to stop feeling sorry for herself.
She chose to keep her feelings to herself, chose to be closed off emotionally when she had every opportunity to be open and let the world in.
Even when life could have been good after the war, she would not reach out to those who were reaching out to her.
I felt nothing for her but pity. Such a miserable life and make no mistake about it, it was her undoing herself.
Such a waste. I could never be proud of this woman. If I knew her in person I could never befriend her.
There are glimpses in the story of what other people thought of her. And by the end you realize those people’s opinions were accurate. She was self serving , selfish, always thinking about herself. Yuck.

Read if you like slow pace with a slight climax

I really struggled to finish this book starting from hour 1. its slow paced and not much changed throughout the storyline. It has its interesting twists that then fizzle down quickly. when you finally get to the true climax of the story your left feeling disappointed, disheartened. and a little let down.

A Fascinating Missing Piece of History

This is a fascinating story and both a chick book. Whoever thought about who tasted Hitler's food and that it was not a choice but a forced wartime job? It is also about naive love and what the war does to it.

Well researched and fascinating historical fiction WW2 novel that sheds light on the German civilian perspective of how now all Germans supported the Nazi movement but were forced into situations so they could just survive. It's also a love story; for one's country, for one's husband, friends and the short yet powerful relationships that come and go. In the end it's sad but also a beautiful melancholic novel.

This book shows that German's also suffered under Hitlers region including many of the soldiers including those in the SS who couldn't bear the attrocities Hitler demanded. the reader makes Rosa come to life. this is an excellent book.

Outstanding. A memorable story. Beautifully written and read. I am so glad I bought this novel.