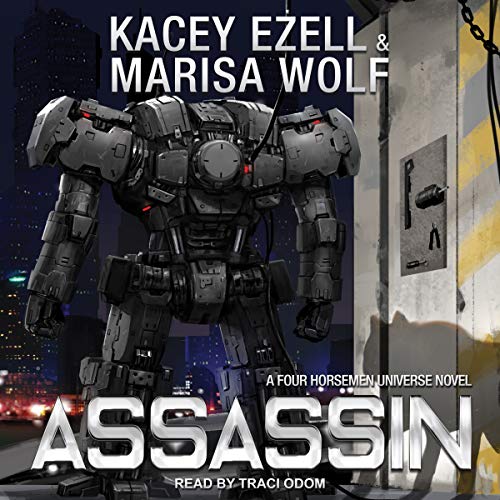 Depik. The race of catlike assassins is feared galaxy-wide. Few living people have seen them, as the sight of one is usually the last thing its victim sees.

Clan politics on the Depik home world of Khatash are complicated, with clans jockeying for contracts and the prestige and wealth they bring. There's only one rule: Depik do not kill other Depik. Ever.

When Reow is implicated in killing the Depik governor, though, her clan is declared anathema. Her four offspring are placed under interdict - they are to be killed on sight - and Del, Flame, Blade, and Death must flee with their molly, Susa.

With Reow dead and Hunters tracking them across the galaxy, will they live long enough to find the real killer, or will they find themselves assassinated by their own kind?

What listeners say about Assassin

Fascinating introduction to a new race in an ever expanding shared universe. I can't wait for more in the Revelations Cycle and will be checking out the author's other works in the meantime.

Wolf and Ezell craft an exciting and compelling story. It moved quickly with lots of interesting moving parts that all come together quite beautifully in the end. Easy and fun listen.

One of the best 4HU novels to date. Awesome story and plot. Gives good insight into the depik assassins.

easily one of the most emotional stories in The four horsemen universe hard to place in the timeline, until hints towards the end give it away, but feeds right into the overarching story

Kacey and Marisa nail it!

this one keeps you reading. fast paced and well written, I look for more from this great duo!

loved it. great New characters, very well developed. I was invested in each character until the end. great plot.