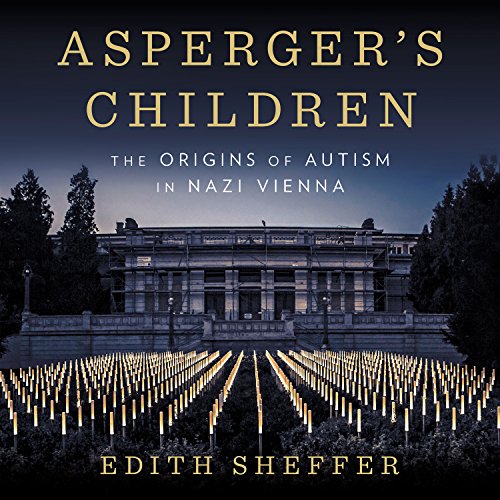 By: Edith Sheffer
Narrated by: Christa Lewis
Try for £0.00

In 1930s and 1940s Vienna, child psychiatrist Hans Asperger sought to define autism as a diagnostic category, aiming to treat those children, usually boys, he deemed capable of participating fully in society.

Depicted as a compassionate and devoted researcher, Asperger was in fact deeply influenced by Nazi psychiatry. Although he did offer individualized care to children he deemed promising, he also prescribed harsh institutionalization and even transfer to Spiegelgrund, one of the Reich's deadliest killing centers, for children with greater disabilities, who, he held, could not integrate into the community.

With sensitivity and passion, Edith Sheffer's scrupulous research reveals the heartbreaking voices and experiences of many of these children, while also illuminating a Nazi regime obsessed with sorting the population into categories, cataloging people by race, heredity, politics, religion, sexuality, criminality, and biological defects - labels that became the basis of either rehabilitation or persecution and extermination.

What listeners say about Asperger's Children

Made my hair stand on end, emotions choked, haunting images that will endure forever more.

excellent account and it is clear that the author did an immense amount of research to support the notion that Hans asperger was more complicit in the Nazi regime that it first seemed. would strongly recommend.

This book as been really eyeopening for me as a historian and an autistic person, and has really helped me developed my thoughts on the history of psychiatry. Invaluable read.

This book has a powerful analysis of the history of Nazi child psychiatry and the child euthanasia program under the Reich, and this analysis, with harrowing narratives from survivors and those lost, need to be heard. The fundamental conceit of the book, contextualizing Dr. Asperger's development of his concept of autism within the Nazi conceptualization of Gemüt is crucial and is almost completely absent from the modern scientific discourse in the topic (as Ms. Sheffer points out, this is largely due to certain critical actions, such as the lack of an accessible English translation of the introduction/preface of Dr. Asperger's thesis).

It is well performed and engaging, and certainly at a minimum everyone working in the autism field should listen to this book (I think in many ways it is far more powerful in audio form than it would be in reading it). There are two major weaknesses with which I do take some issue. The first is that the horrors of Nazi psychiatry and the euthanasia program are not adequately contextualized within the longer running horrors of institutionalization both on the European and North American continents. This is not meant to downplay the atrocity of the Reich, but rather to emphasize that many similar atrocities happened before and after the war and outside of the Reich. This is acknowledged in the book but only mentioned in the briefest of passing, and there is little/no critical analysis of this. The second issue is just a warning - the book begins with the goal of critically evaluating the modern conception of autism against its roots in Nazi psychiatry. This is, actually, almost completely absent from the book - in terms of the book read time, it represents about 20 minutes at the end of the book (she even dismisses this as an "open question"). I do think that the conceptualization at this point is too dominated by an anti-psychiatry bias to really have a fruitful discussion. I think this is too bad - this is really a valuable book, and I am glad I read it, but I really would have liked a discussion of what we today think is a real phenomenon (that is, that there are really autistic people with both unique potential and unique challenges). It is really important for us to think about how we adapt how we think about this to understanding the model of autism as a Gemüt pathology under the Reich and coming to terms with how to talk about concepts like mindblindness without ignoring that cultural expectations vary (and sometimes, as in the case of the "culture" of the Reich) may be outside the capability for humans to meet.

If the author were to write that second book, however, I would gladly read it.

The reader was AWESOME!!! That is rare with audiobooks, so I appreciate the accurate representation.

If you want to learn about gemut you should read this book. If you want to learn about Aspergers do not read this book. I’ll summarize it for you. Aspergers was involved in the extermination of children (not directly) during the Nazi regime but changed his tune after the war ended. A syndrome was named after him by a lady who didn’t know all the terrible things he did. That is all. A book did not need to be written she could’ve written the paper.